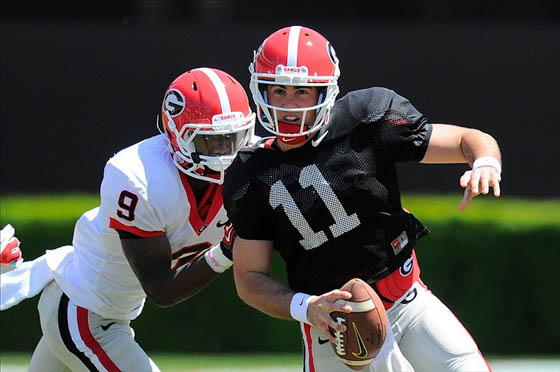 The Black team defeated the Red team 23-17 in the 2013 Georgia Bulldogs G-Day game Saturday at Sanford Stadium before an announced crowd of 45,113.

Backup quarterback Hutson Mason led the Black team by completing 16-of-27 passes for 191 yards and a touchdown. Mason’s lone touchdown pass was completed to early enrollee Jonathan Rumph, a native of Cayce, SC.

Rumph led the Black in receiving with a game-high 98 yards. He also caught a 47-yard pass from Parker Welch, who finished the game 4-of-8 for 103 yards.

Running backs Todd Gurley and Keith Marshall were used sparingly. Gurley rushed for 25 yards on only four carries, while Marshall picked up only six yards on six rushes.

Kyle Karempelis, a rising junior from Roswell, led all rushers with 13 carries for 89 yards. He also caught three passes for 25 yards.

“I thought it was a great day,” Georgia coach Mark Richt said. “The guys played hard. I thought we looked like a a really well-conditioned football team. Overall, I really like how things are going this spring.”

Georgia will wrap up Spring drills with a practices on Tuesday and Thursday. The Dawgs open the 2013 season at Clemson on Saturday, August 31 at 8 p.m. ET. The game will be televised nationally by ABC.