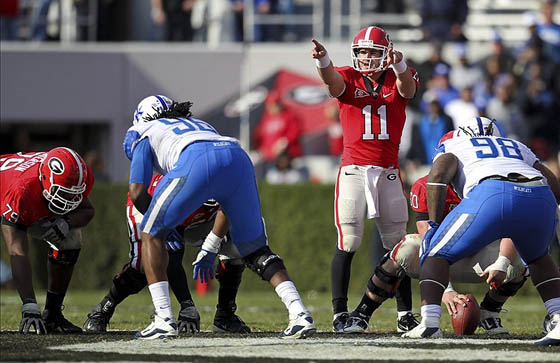 Georgia is a 4 TD favorite over Kentucky. Daniel Shirey-US PRESSWIRE

On Saturday, the 12th-ranked Georgia Bulldogs travel to Lexington to take on the Kentucky Wildcats. The game will be televised by Fox Sports Net at 7 p.m. ET.

Georgia (5-1, 3-1 SEC) is coming off of a bye week, which was preceded by an embarrassing 35-7 blowout loss at South Carolina. The Bulldogs hope to get back on the winning track and take out their frustration on the Wildcats.

Kentucky is abysmal this season. The Wildcats are 1-6 overall and 0-4 in the SEC, with their only victory this season coming over Kent State. The Cats even lost to Western Kentucky in overtime.

The Bulldogs have dominated the series against the Wildcats, leading 51-12-2. Kentucky hasn’t beaten Georgia since a 34-27 upset win in Athens in 2009. The last time the Dawgs lost in Lexington was in 2006.

Despite the loss to South Carolina, Georgia is still in the SEC East race. The Gamecocks and Bulldogs currently have the same record, but USC holds the tiebreaker. South Carolina visits Florida this weekend and could come away with a loss. If that happens, Georgia would need to win out to make the SEC Championship Game.