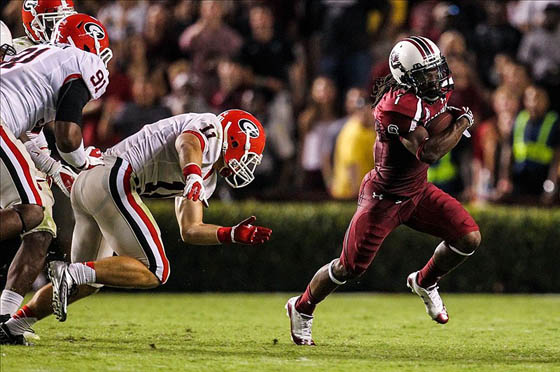 Georgia had a chance to jump into national title contention, but wilted under the pressure again and fell to South Carolina 35-7. The loss drops UGA’s record to 5-1 overall and 3-1 in the SEC.

The fifth-ranked Bulldogs were never close to the sixth-ranked Gamecocks last night, and it was embarrassing. A Ken Malcome touchdown late in the fourth quarter kept the Dawgs from being shutout for the first time since 1995.

South Carolina asserted their dominance on the opening possession of the game, marching 76 yards to take a 7-0 lead. Georgia’s Malcolm Mitchell returned the ensuing kickoff 48 yards, but the Dawgs turned it over three plays later when Aaron Murray’s pass was tipped and then intercepted.

The Gamecocks proceeded to march down the field on Georgia’s defense again, this time for 69 yards. After a 14-yard TD pass, USC led 14-0.

Georgia would go three and out on their next possession and had to punt. South Carolina’s Ace Sanders returned the punt 70 yards for the touchdown and the rout was on.

South Carolina didn’t score in the 2nd quarter and took their 21-0 lead into the half. But the game was already over for the Bulldogs who looked they had already quit. The Dawgs didn’t put up much of a fight in the 2nd half and finally succumbed to defeat.

The Gamecocks finished with 392 yards of total offense compared to only 224 for Georgia.

“They can’t say they own us anymore, that’s for sure,” South Carolina head coach Steve Spurrier said. That hurts, but it’s true. Georgia has lost three straight to the Gamecocks.

The Bulldogs are now 0-10 against SEC teams that finished ranked since 2008. And over the last two years, Georgia is 0-10 against all ranked teams.

Those number are indicative of the state of Georgia’s program under Richt lately. The Bulldogs simply can’t win the big games.

They will, however, get another chance at a big game on Oct. 27 when they face Florida in Jacksonville. Even though they got routed last night, UGA can still finish the season 11-1 or 10-2. Of course that’s if Georgia doesn’t lose a game it is supposed to win.

Georgia players and their fans will have an extra week to boil over this loss as Saturday is an off week. The Bulldogs return to action on Oct. 20 at Kentucky. Time and TV for that game will be announced tomorrow.