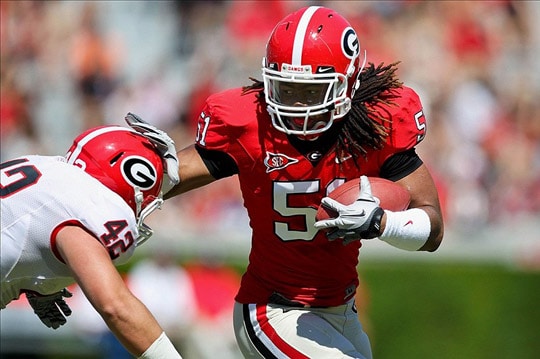 The 2013 Georgia Bulldogs G-Day Spring football game will be held on Saturday, April 6.

The Masters Golf Tournament will be held April 11-14, so this will be the third straight year that G-Day and the Masters are on separate weekends.

Moving the G-Day game away from the Masters was a tactical decision made by UGA athletics director Greg McGarity, who was hired in August 2010. This allows more fans to attend the game and provides extra media attention in Athens.

Georgia opens the 2013 season at the Clemson Tigers on Saturday, Aug. 31. The Dawgs also host North Texas and Appalachian State and travel to face Georgia Tech.

The 2013 SEC schedule has not been released yet, but Georgia will likely host Auburn, Kentucky, Missouri and South Carolina and travel to Tennessee and Vanderbilt. The Bulldogs will also face the Florida Gators in Jacksonville.

The eighth SEC game will be decided this summer and it’s likely to be a road contest at Alabama, Arkansas or LSU since Georgia hasn’t faced either of those teams since 2010.