Georgia Nike Pro Combat uniforms to be unveiled on Facebook

Georgia Nike Pro Combat uniforms to be unveiled on Facebook

Pictures of the Georgia Nike Pro Combat uniforms will be officially unveiled on Saturday, August 20, 2011 on the official UGA facebook page. A sneak preview will be shown at 12:00 p.m. ET with the full release at 1:00 p.m. ET.

The Bulldogs will wear the uniforms against the Boise State Broncos at the 201 Chick-fil-A College Kickoff at the Georgia Dome. Boise State will also be wearing their NIke Pro Combats.

Emily Deitz, UGA Director of Promotions, provided the official release information this morning on “Bulldog Roundtable” on 680 The Fan with Chuck Dowdle.

Deitz:
“The theme of the day is ‘spread the red.’ Fans can go online tomorrow on facebook.com at noon and get a sneak peak of some special items that the Bulldogs may or may not have on. Nike Pro Combat uniforms. So our fans can go online tomorrow at noon on facebook and get a sneak preview. And then at one o’clock the uniform will be completely unveiled. So you can go to facebook.com/georgiabulldogs and take a look at that.”

Dowdle:
“And fans who come to Picture Day will get a chance to see it in person?”

Deitz:
They’ll get a chance to see it in person, take their photos with it, get one-on-one with the Nike Pro Combat uniform.”

Dowdle:
“And I’m just wondering since the theme for September 3 is ‘Spread the Red’ if that’s any kind of a little hint as to what those uniforms are going to look like?”

Deitz:
“I would definitely plan on wearing a lot of red that day (September 3). A lot of red.”

The dialogue between Deitz and Dowdle seems to reaffirm what lots of Dawg fans have been hearing about the uniforms. There will be a lot of red. So likely red jerseys and red pants. No mention of the helmet was made, but rumors are a silver helmet with a red stripe.

We’ll post pictures of the uniforms tomorrow after they are released. Below is a teaser photo of the helmet from GeorgiaDogs.com: 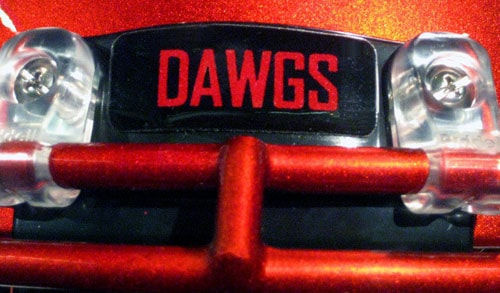