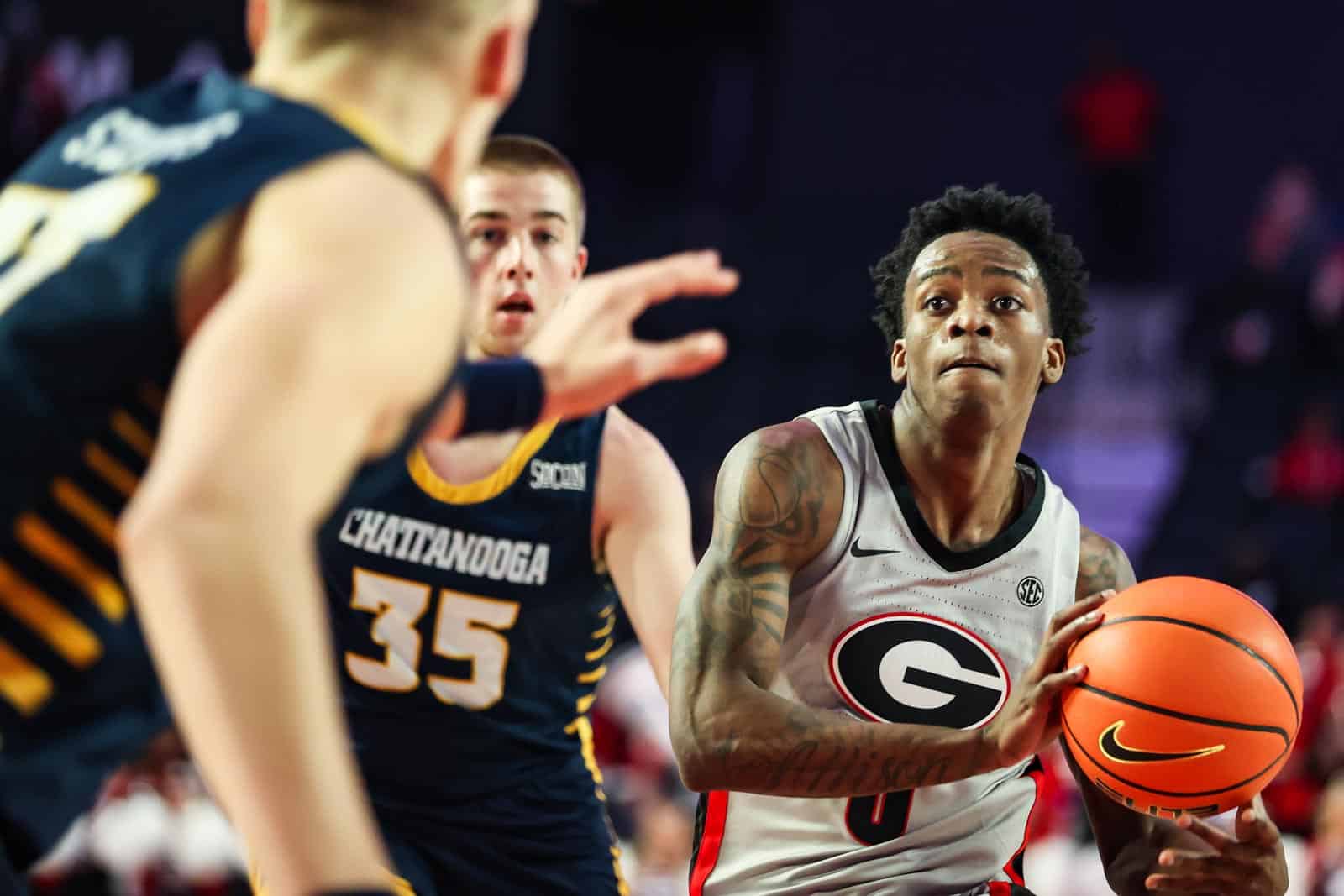 ATHENS, Ga. – Despite not holding a lead until the three-minute mark, the University of Georgia men’s basketball team rode a second-half comeback to a 72-65 victory over Chattanooga Wednesday afternoon before 7,918 spectators at Stegeman Coliseum.

Georgia (9-3) was led in scoring by junior Kario Oquendo, who tallied a season-high 22 points on 7-for-11 shooting. Senior Terry Roberts broke into double-figures scoring for the fifth-straight game, finishing with 14 points and a team-best six assists, while reigning SEC Player of the Week Braelen Bridges notched 12 points. For the game, the Bulldogs shot 45 percent from the field and dominated points in the paint by a 32-8 margin.

“So many things to improve upon, but really proud of the fight down the stretch,” Georgia head coach Mike White said following the game. “Kario Oqueno, was fantastic, making huge plays…Lot of things that we didn’t do well, but with that said, Chattanooga is really good. They’re going to have a good chance, in my opinion, of playing in the NCAA Tournament.”

Chattanooga (8-5) started the game on a torrent, hitting three 3-pointers in less than two minutes to force an early Georgia timeout. With another trey, the Mocs extended their lead to 14-6, but a five-minute scoring drought helped get the Bulldogs back into the game. Capped off by a Frank Anselem dunk, Georgia reduced the margin to 18-16 by the under-8 timeout.

After seeing their lead lower to one point, the Mocs’ strong outside shooting reappeared, helping them build back the lead late in the first half. Three straight jumpers from Bridges limited the damage and allowed for a 6-2 Georgia run to close out the half with Chattanooga leading, 33-30.

Georgia twice narrowed the score to one point early in the second half, including a ferocious fast break dunk from Oquendo, yet Chattanooga’s lead hovered around eight under the 13-minute mark. The Bulldogs again made it a one-point contest with seven unanswered, culminating in a 3-pointer from seventh-year Jailyn Ingram. A layup from Roberts wrapped up a subsequent 5-0 run and tied the game at 50.

With seven minutes to play, Georgia again tied the game, but Chattanooga’s 13th triple of the afternoon moved it back in front, 58-55. After forcing a shot clock violation, the Bulldogs knotted the game with consecutive scores from Oquendo and junior Matthew-Alexander Moncrieffe, followed on the next possession by a critical block from junior Jabri Abdur-Rahim.

Coming out of the final media break, Oquendo gave Georgia its first lead of the game with a pair of free throws. Both teams then traded threes with Chattanooga tying the game at 63 before Oquendo connected from the top of the key to give the Bulldogs the advantage for good with 1:48 remaining. With a series of successful trips to the line, Georgia clinched the comeback victory.

Georgia closes its non-conference slate with a matchup against Rider next Wednesday, Dec. 28 at Stegeman Coliseum. The game is set to tip at 7 p.m. and will stream live on SEC Network+.

• Spreading the Wealth – Four Bulldogs reached the double-digit mark for the fourth time this season.

• Off the Bench – On the season, the Bulldogs bench has tallied 311 points and has posted a +183 scoring margin over its opponents bench players.

• The Painter’s – The Bulldogs outscored the Mocs 32-8 in the paint on the afternoon.

• Ball Security – Georgia recorded more turnovers than assists in each of its first six games (62 assists and 99 turnovers), since then the Bulldogs have have produced a positive assists-to-turnovers ratio (90 assists and 79 turnovers).

• The Extra Pass – Terry Roberts tallied six assists on the afternoon. This marked Roberts fifth consecutive game with five or more assists –the longest streak of his career.

On the team’s comeback victory…
“Resilience, mental toughness. Little bit of poise. We need a lot more poise versus press, once it’s in and also dead ball press, attack. So many things to improve upon, but really proud of the fight down the stretch. The confidence and swagger offensively—Kario Oquendo, I thought, was fantastic, making huge plays. Braelen (Bridges) only gets 12 but was doubled pretty consistently. I thought he made good decisions—played in traffic a lot and only had two turnovers as we tried to pound it to him as much as possible. I thought Jailyn (Ingram) was good in the first half,
good in the second half, hit a little lefty runner that was a pretty crucial basket and the timing of the basket was very important for us. Terry (Roberts) drew fouls, six assists, two turnovers, continuing to spread out that assist-to-turnover margin. Lot of things that we didn’t do well, but that said, Chattanooga is really good. They’re going to have a good chance, in my opinion, of playing in the NCAA Tournament. I don’t know their league as well as I should—I don’t want to say something crazy. They execute really well, incredibly tough, poised, space you. (Jake) Stephens is such a handful, both offensively and defensively. We decided to double him most of the night which put us in rotations, and they all shoot it. Didn’t realize how well they passed it until you see it live. The way they zip that thing around from multiple positions is fun to watch if you’re a fan, not so fun to watch if you coaching against them.”

On learning to finish games…
“I thought that the intestinal fortitude down the stretch, the body language, the ‘we’re going to get a stop’—had some defensive swagger which you need against a team that’s that difficult to defend, which is what you want every day in practice whether we’re playing against each other or anyone period. Let’s compete. Offensively, getting to the foul line late, converting at the foul line, we continue to do that at a pretty high clip.

Much better free throw-shooting team than we were early on. Assist-turnover ratio, 12 to 11, you want it to be 16 to 8, the better teams obviously, that’s what they are. With that said, we played 12 and the first six games, it was ugly. That number was ugly. In the last six, it’s been a lot better, so we’re improving in that category as well.”

On defending three-point shooting in the second half…
“I don’t feel like we ever defended the three really well, honestly. We tried certain possessions coming out of time outs when we were switching off the whole, we tried only switching on the ball, tried possessions and runs, especially late, late, late where we switched everything. With us, which can make it a little bit confusing, especially until we get to February, is who of the eleven, twelve guys we are playing, who is going to be playing the last four, five, six minutes and what are their strengths, offensively and defensively and who are we trying to throw to? It’s becoming a bit clearer offensively, but defensively for us, we will continue to search. But with a couple lineups out there, I thought we had some success with a lot of switching, which hopefully slowed down their tempo and ability to execute. Had a miss cue there, with Stevens open three at the top of the key, which was supposed to be a switch. So, our attention to detail and our level of communication was a C plus, but it’s got to get to an A and be maintained there.”

On body language…
“I think that early on, I am not sure we were as confident in ourselves as young people that we could get it done. I think that if we came up on the short end against Notre Dame, I am not sure we would have won this game. I think that game was a boost, we talked about it yesterday or the day before, it all runs together, but that was a boost for us. I think as a head coach I was a little bit more riled than our guys mid second half, like we got to execute better, that was not the right shot, that was a late rotation there. But our guys had a sense of ‘we’re going to figure this out, we are going to get some stops down the stretch,’ and we did.”

On what has allowed this team to fight back…
“I think our confidence is growing as a team. Understand what and what not to do at the end of the games. Just executing. We have to execute what Coach (White) tells us to do and we’ll be perfectly fine.”

On Kario Oquendo’s big day…
“I’m used to seeing that. It makes me so happy to see my brother go crazy, to do what we all know he can do. I’m just so excited for him. I’m really happy for him.”

On the importance of following up the Notre Dame win with a win today…
“It was really big. Especially going into Christmas break. A lot of people tend to get relaxed, go to Christmas, take some days off, and don’t take that last game too seriously. We kind of started out slow, but we got it back together at the end of the game.”

On what it took to finish strong and pull out a win…
“Every good team has to stay the course. Before they came in, we knew they were good. Coach (White) says all the time that we have to respond to adversity. I think that is how this team is growing. We went through a lot of hard situations at the beginning of the game. They scored 16 points in the first two minutes of the game. Shots weren’t going in for us. They were hitting a lot of shots. We just stayed the course and kept playing.”

On the team effort…
“That is just how we are built. We put defense ahead of everything else on our team, so when we come out and the defense isn’t working, the offense isn’t going to work either. So, basically, we just came out and played hard. Anybody can be called on upon at any moment.”

On what he learned about the team…
“I just love my guys. I think that this team is a hard-fought team. We have a lot of guys from a lot of different backgrounds that are ready to fight whenever.”