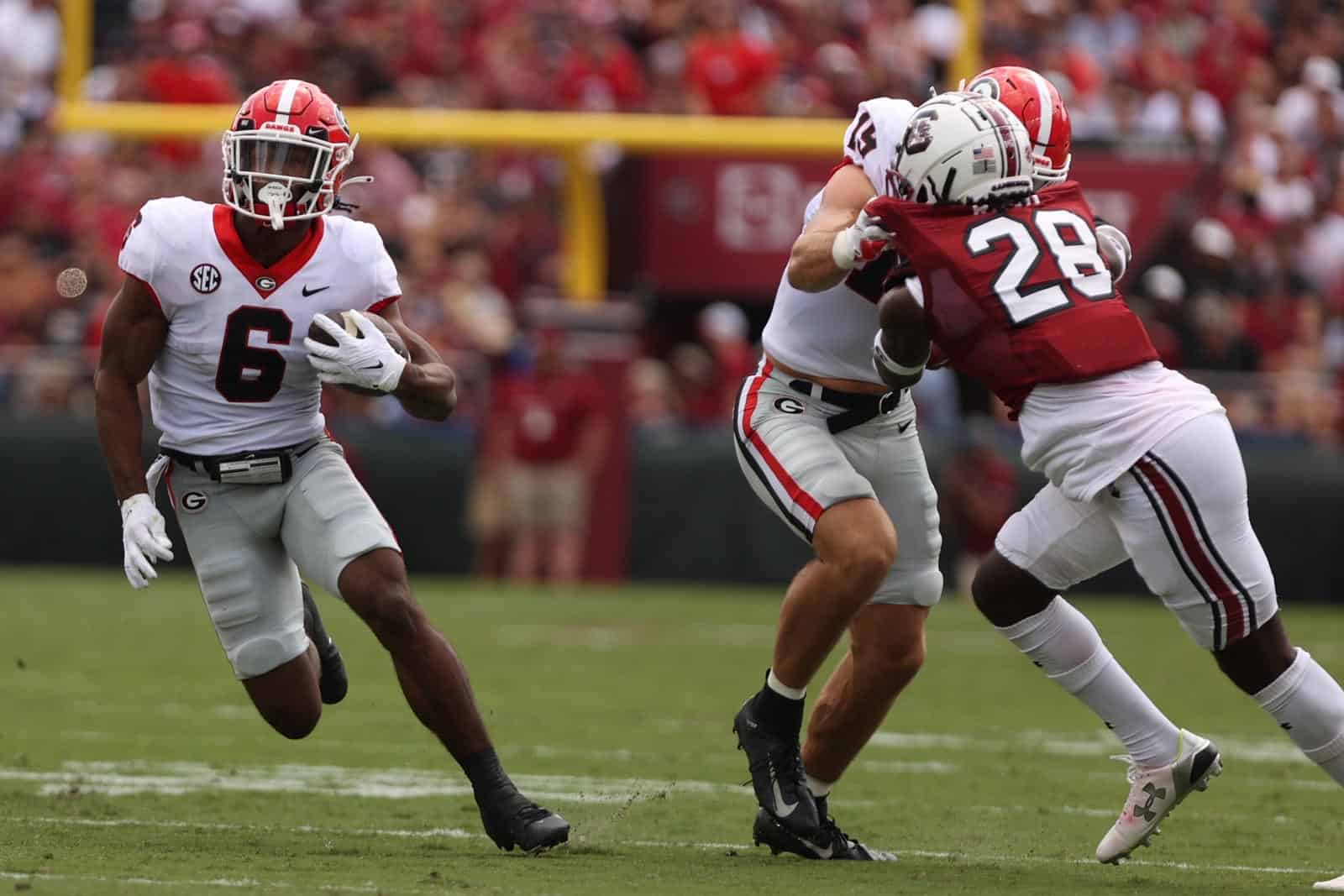 Georgia (3-0, 1-0 SEC) amassed 547 yards of offense, including an average of 8.7 yards per play. Senior quarterback Stetson Bennett finished 16-of-23 passing for 284 yards and two touchdowns, while also leading the team in rushing with 36 yards and a score on three carries. Sophomore tight end Brock Bowers tallied 126 all-purpose yards and three touchdowns.

“We’ve got a young team and a lot of them haven’t played in or seen that type of environment,” Georgia head coach Kirby Smart said following the game. “I thought we had some guys grow up today. The offense really executed efficiently and did a nice job. The defense was ‘bend, but don’t break’ again and they’ve been very opportunistic in terms of getting turnovers after big plays.”

After South Carolina’s first drive stalled near midfield, the Georgia offense quickly moved down the field for an opening score, set up by a 28-yard pass from Bennett to redshirt sophomore receiver Ladd McConkey on second-and-2. The drive concluded with a 5-yard touchdown run by Bowers, capping off a 10-play, 82-yard sequence.

On the ensuing Gamecock possession, quarterback Spencer Rattler found tight end Jaheim Bell for a 46-yard completion, but the momentum was short-lived as he was intercepted two plays later by freshman defensive back Malaki Starks, who returned the ball to the South Carolina 43-yard line. The Bulldogs soon capitalized on the field position as Bennett scrambled to the 1-yard line, followed by junior tailback Kendall Milton punching it in to make the score, 14-0.

South Carolina extended its next drive with a fake punt as Kai Kroger completed a 20-yard pass over the middle to Traevon Kenion. The Gamecocks eventually reached the Bulldog 37, but Rattler’s fourth down pass went incomplete to close the drive. Aided by a pass interference penalty, Georgia then extended the lead to 21-0 as Bowers made a tremendous tiptoe catch in the end zone.

Following a series of punts from both teams, Georgia reached the South Carolina 25-yard line via a pair of long passing plays, but three straight incompletions resulted in a 42-yard field goal by senior place kicker Jack Podlesny, bringing the halftime score to 24-0.

Georgia opened the second half with possession and wasted no time bolstering its advantage as Bennett connected with a wide-open Bowers, who ran away from the South Carolina defense for a 78-yard score, his third of the afternoon. The Bulldogs continued the scoring on their next drive, moving 88 yards down the field before Bennett rushed up the middle for a touchdown.

On South Carolina’s next play from scrimmage, Rattler was again intercepted by junior defensive back Dan Jackson, who wrestled the ball away for his first career pick. Redshirt sophomore quarterback Carson Beck relieved Bennett and promptly hit freshman tight end Oscar Delp for his first career touchdown, leaving the score at 45-0 heading into the fourth quarter.

In the final period, the Georgia offense continued to roll down the field reaching the 5-yard line before redshirt sophomore place kicker Jared Zirkel made his first career field goal from 21 yards out, finishing up a 13-play, 88-yard possession.

Georgia returns home next weekend to face Kent State on Saturday, Sept. 24 at noon at Sanford Stadium. The game will be streamed live on SEC Network+.

Offensive Numbers: Georgia tallied 547 yards of total offense in winning 48-7 on Saturday. Sophomore tight end Brock Bowers scored three touchdowns — two on receptions and one rushing. That is the second time in his career (Vanderbilt 2021) that Bowers has scored three times and in that manner in the same game. Bowers ended up with five catches for 121 yards, including a 78-yarder, and the two touchdowns. Senior quarterback Stetson Bennett went 16-of-23 for 284 yards and two touchdowns in two-plus quarters of work. He also rushed for a touchdown to cap the Bulldogs’ season-best drive of 88 yards on eight plays and was the leading rusher with 36 yards on three attempts. Senior kicker Jack Podlesny drilled a season-best 42-yard field goal.

A Look At The Defense: The Bulldogs have allowed 10 points this season, which is the program’s lowest 3-game total since 1927. South Carolina finished the game with 306 yards of total offense. The leading tackler for the Bulldogs was sophomore linebacker Jamon Dumas-Johnson with six stops. Freshman defensive back Malaki Starks and sophomore inside linebacker Trezmen Marshall picked off passes for the Bulldogs. For Marshall, it was his first career interception. Collectively, the Bulldogs had six tackles for loss.

Points Off Turnovers: Georgia picked up 14 points off three turnovers. The Bulldogs moved to +6 for the year with 31 points off turnovers, while Georgia has not had any turnovers this year.

This and That: Freshman tight end Oscar Delp recorded the first touchdown of his career on his first collegiate catch … South Carolina’s successful fake punt was the first against Georgia since Cincinnati in the 2021 Chick-fil-A Peach Bowl … The Gamecocks’ 46-yard pass play was the longest surrendered by the Bulldogs this year.

Up Next: No. 2 Georgia (3-0) returns to Dooley Field at Sanford Stadium to face Kent State (2-2) at noon on ESPN+ and SEC Network+. The Golden Flashes defeated Long Island on Saturday.