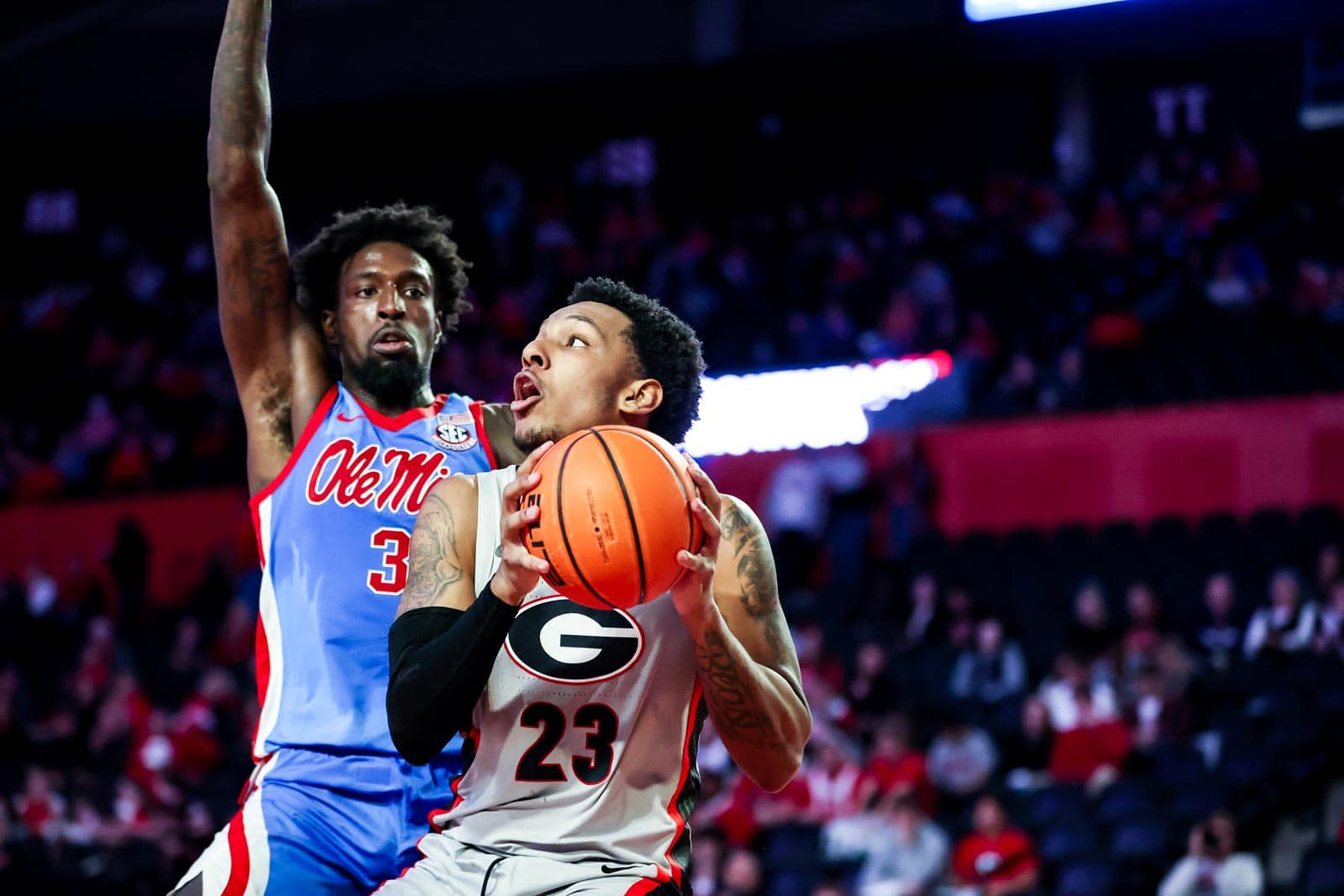 ATHENS, Ga. – Despite a tightly contested first half, the University of Georgia men’s basketball team fell to Ole Miss 85-68 Saturday afternoon before 7,380 spectators at Stegeman Coliseum.

Redshirt-senior Braelen Bridges led Georgia (6-21, 1-13 SEC) with 17 points on 7-for-9 shooting, including a perfect 3-for-3 from the charity stripe. This marked Bridges’ fourth consecutive game shooting 66-percent or better. Sophomore Kario Oquendo notched his 18th double-digit performance of the season with 14 points on 5-for-15 shooting and five boards on the afternoon – his 11th double-digit game in conference play, while sophomore Jabri Abdur-Rahim tallied 11 points. For the game, the Bulldogs shot 48.0 percent from the field.

“Well, we didn’t win, so that was – it wasn’t from lack of work, attention to detail, preparation, or anything like that,” said Georgia head coach Tom Crean following the game. “We just didn’t play very well today, especially defensively in the second half. And upon that, we’ve been missing some shots, missing some close shots. That hurt us, and unfortunately, we did not defend the way that we needed to defend.”

After a scoreless opening minute and a half, Ole Miss (13-14, 4-10 SEC) took the game’s first basket on a straightaway 3-pointer. Afterward, the two squads entered a defensive battle with the Rebels taking an 8-4 lead into the first media timeout. The teams continue to trade baskets over the next five minutes of play, with Georgia emphasizing points in the paint. At the midway mark, the Bulldogs trailed by three, 22-19.

Georgia cut the Ole Miss lead down to one entering the under-eight media and with 7:08 junior Dalen Ridgnal drained a corner three to tie things up at 26 apiece. Moments later, redshirt-senior Noah Baumann gave the Bulldogs their first lead of the game after completing a four-point play. The team went back-and-forth in the final minutes of the half before Jaemyn Brakefield hit a 3-pointer at the buzzer to give Ole Miss a 42-38 lead heading into the locker room.

Coming out of the half Ole Miss quickly built its lead to eight. After trading a couple of buckets, the Bulldogs narrowed the margin to five at the first media break. The Rebels responded, extending the lead to nine thanks to the deep ball. Georgia continued to fight, as they continued to pound the paint. With eight minutes remaining, Bridges used a nifty hook shot to draw the Bulldogs within six, but Ole Miss’ Tye Fagan combined for nine of the final 19 points for the Rebels as they went on to an 85-68 victory.

Georgia returns to action on Tuesday, Feb. 22 when they travel to College Station, Texas to take on the Texas A&M Aggies at 7 p.m. The game will broadcast on the SEC Network.

• Tonight’s game marks the 122nd meeting between the Bulldogs and Rebels – Georgia leads Ole Miss 76-46 in the series.

• Baumann’s Milestone – With a first-half three, redshirt-senior Noah Baumann reached the 200-mark for his career.

• Leading by Example – Sophomore Kario Oquendo led the Bulldogs in points for the 12th time his season. Today was his 18th double-digit performance, including his 11th in conference play and eighth in a row.

• Make ‘Em Count – Redshirt-senior Braelen Bridges shot 7-9 from the field. His performance marks the fourth straight game where he shot 66 percent or higher.

• They’re Free – The Bulldogs shot 17-21 (81%) from the free-throw line, solidifying their place as the SEC’s most efficient team from the stripe. Today was the 11th game this season that the Bulldogs shot over 80% from the line.

On trying to keep the focus on basketball…
“Well, we didn’t win, so that was — it wasn’t from lack of work, attention to detail, preparation, or anything like that. We just didn’t play very well today, especially defensively in the second half. And upon that, we’ve been missing some shots, missing some close shots. That hurt us, and unfortunately, we did not defend the way that we needed to defend, and it came to the dribble in the first half or when it came to the next pass in the second half. In the two hours of the basketball game, those were the biggest mistakes we made.”

On the teams frustration…
“I would think so. Absolutely. That’s just human nature, but I think when you come back every day and you come back with energy and get excited, and they practiced extremely well. If you ever walked in and saw us practice, you wouldn’t look at that and you wouldn’t pick the record. They come and they go, so, yeah, frustration in a game, frustration during the game, frustration after the game, absolutely. When you lose, it’s extremely easy to try to abstain yourself from the result or not attach yourself to the result or look for something to blame, and you just have to stay together, right? You have to stay together and compete and fight and get ready for the next day.”

On Tye Fagan…
“It’s frustrating that we lost, but he did a good job. He is a good player and — he is. He played well today. It’s not about any one individual. It’s the fact that we as a team didn’t play that well, and that is the part that’s unfortunate. Not about anybody’s individual contributions. It’s more team-centered for me.”

On the shot selection in the second half…
“It wasn’t really apart of the game plan to stop shooting threes. When you’re losing in the second half you really want to get to the free throw line. So guys were attacking the rim and trying to get fouled. We were feeding the post and Braelen (Bridges) was making some nice passes out to the three point line. We were told drive, get to the rim, trying to stop the clock, get to the three point line so we can make a run at this thing. But no it wasn’t like a don’t shoot threes type thing. We’re a good shooting team. We’re never going to be told to stop shooting threes.”

On Ole Miss in the second half…
“They moved the ball really well. Without two of their starting guards, they played really well together as a team. They shot the ball well. They’re a good squad and so hats off to them. We were in it first half. Like I always say, it’s three to five minute stretches of a game that you really kind of lose grasp of.”

On attacking the paint in the first half…
“Well compared to the LSU game we got the ball over half court. But this game we cutted really well. Once Braelen got the ball, he’s the best passing center in the SEC, in my opinion, so we play through him and goo things happen. That’s exactly what happened. When we play through Braelen, we’re a good basketball team. We cut hard, we move the ball really well, and that ultimately is why we were in it in the first half. We were in the game but it shouldn’t have been a game. We had zero three stops in a row which is always a charted stat and that’s got to be key in a basketball game. You got to play defense.”