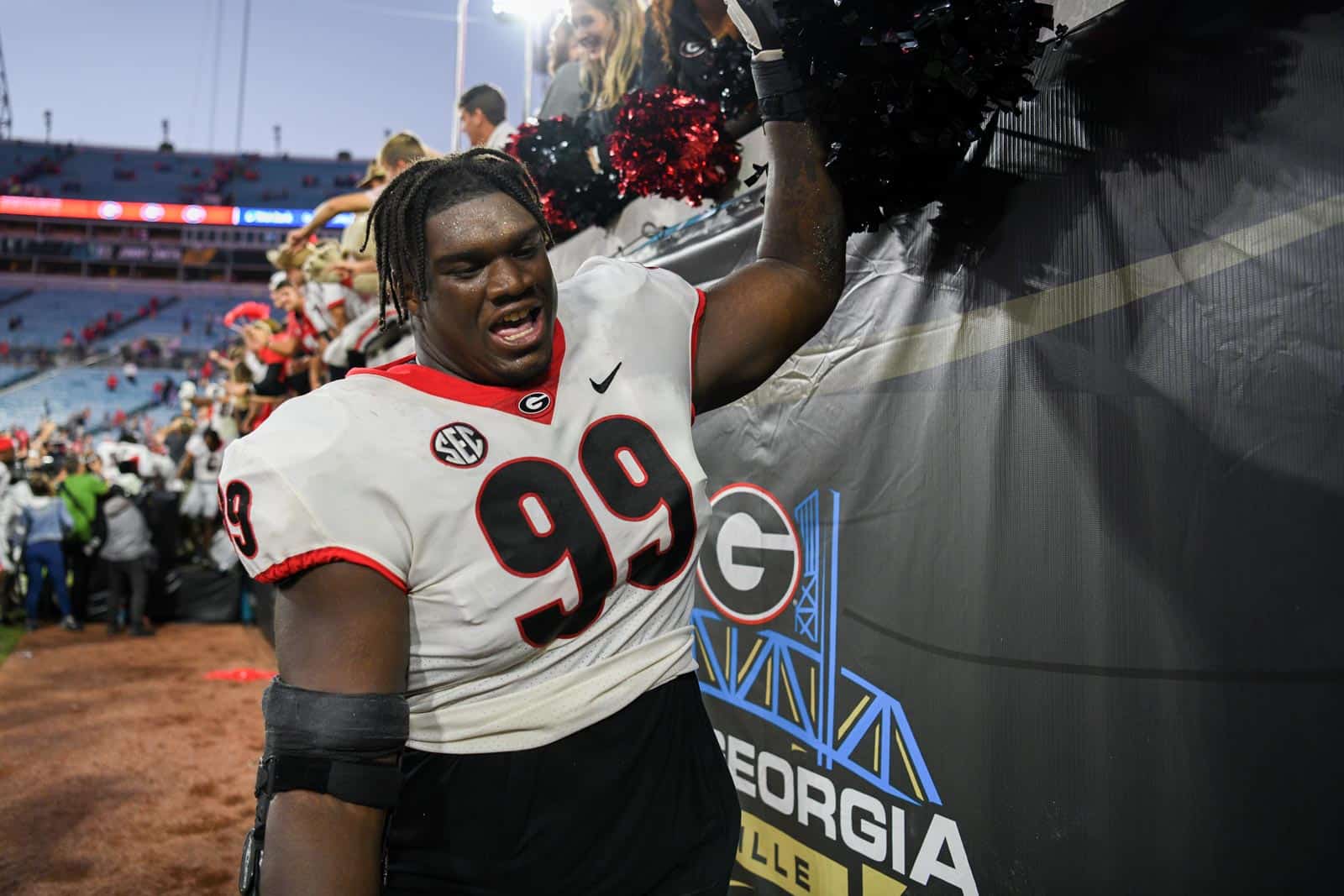 UGA senior defensive lineman Jordan Davis has been named a finalist for the 2021 Bronko Nagurski Trophy, the Football Writers Association of America (FWAA) announced on Wednesday.

The Bronko Nagurski trophy is an annual award given to the top defensive player in college football as voted by the FWAA. Jordan Davis is one of three finalists for the award this season.

Below are the three finalists with info from the FWAA:

Will Anderson Jr., LB, Alabama (#31, 6-4, 243, So., Hampton, Ga.): Last season’s FWAA Freshman Player of the Year is the cog in an Alabama (9-1) defense that is fourth nationally in rushing defense giving up just 83.5 yards per game. Anderson is versatile in “affecting the quarterback,” a non-statistical term but a favorite of head coach Nick Saban when talking with the media. A beast in the backfield, he leads the nation in sacks (12.5) and tackles for loss (23.0) and has been credited by the Alabama coaching staff with a team-high 34 quarterback pressures. Only Derrick Thomas (1987-88) and Wallace Gilberry (2007) have better single-season sack and TFL numbers in Crimson Tide history. Anderson was the Bronko Nagurski National Player of the Week on Oct. 16 following a 4.0-sack game at Mississippi State, the most since Thomas did it in 1988, and has had at least one sack in 7 of 10 games. His 67 tackles (36 solo), second on the team, include and at least 1.0 TFL in nine of 10 games.  Alabama’s previous Bronko Nagurski winner was defensive end Jonathan Allen in 2016, and the Crimson Tide have had finalists now in nine of the last 11 seasons, most recently nose guard Quinnen Williams in 2018.

Jordan Davis, DT, Georgia (#99, 6-6, 340, Sr., Charlotte, N.C.): Davis is credited with being the most dominant defensive tackle in college football for top-ranked Georgia (10-0). The Bulldogs own the nation’s second-best total defense, giving up 247.0 yards per game and, with Davis anchoring the interior line, own the nation’s second-best rushing defense (78.1 ypg). Georgia is the national scoring defense leader (7.6 ppg) by more than a touchdown and has not given up more than 17 points in any game. Davis first garnered attention in Week 1 when he earned the Bronko Nagurski National Player of the Week honor with three tackles and a sack as Georgia held Clemson to two rushing yards in a 10-3 win. Double-teamed and avoided in the middle, Davis’ 23 tackles and 3.5 sacks don’t pop off the stat sheet. But nobody has been able to run past Davis and the attention he commands opens opportunities for other players, as linebackers Nakobe Dean and Channing Tindall and safety Lewis Cine are each having All-America caliber seasons. Georgia is well represented in Bronko Nagurski Trophy history. The Bulldogs have now had a finalist in three of the last five seasons (safety J.R. Reed in 2019 and linebacker Roquan Smith in 2017), seven finalists overall, and one previous winner in Champ Bailey from 1998.

Kayvon Thibodeaux, DE, Oregon (#5, 6-5, 258, Soph., Los Angeles, Calif.): Thibodeaux is perhaps the hottest defender in the nation and the first Bronko Nagurski finalist for Oregon (9-1) since defensive tackle Haloti Ngata in 2005. The pass rush specialist lists as a linebacker but usually plays standing up on the defensive front. Thibodeaux had 26 quarterback pressures in the four games leading into last weekend and owns a 91.2 pass-rush grade from PFF, ninth-best among FBS edge defenders. He added two sacks last week against Washington State, and despite losing two early-season games to injury, leads Oregon with 6.0 sacks and has 35 total tackles, fifth-best on the Ducks. Thibodeaux was the Bronko Nagurski National Player of the Week for Oct. 23 when he had a career-high nine tackles, 4.5 TFL’s and two sacks in a win over UCLA. Oregon has never had a Bronko Nagurski Trophy winner.

The annual Bronko Nagurski Awards Banquet will be held on Monday, Dec. 6 at the Charlotte Convention Center in Charlotte, N.C.

Jordan Davis, who hails from from Charlotte, has played in all 10 games during the 2021 season and has 23 total tackles (9 solo, 14 assisted). Davis has also recorded two sacks for a loss of 10 yards to go along with nine quarterback hurries.

The No. 1 Georgia Bulldogs (10-0, 8-0 SEC) play host to the Charleston Southern Buccaneers on Saturday. The SEC Network+ and ESPN+ will stream the matchup at noon ET.