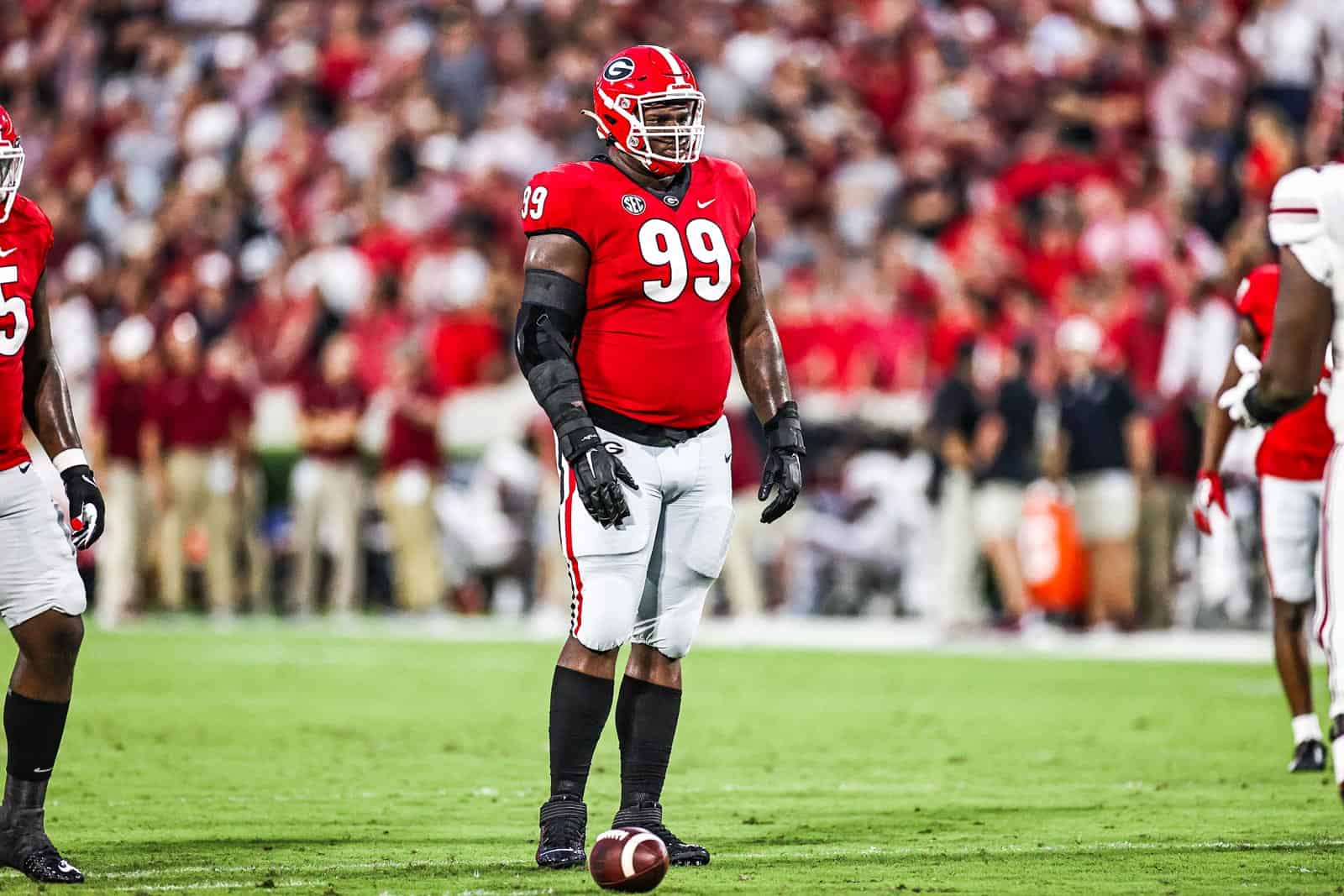 UGA football senior defensive lineman Jordan Davis has been named a finalist for the 2021 Outland Trophy, the Football Writers Association of America (FWAA) has announced.

The Outland Trophy is an award that is given annually to the nation’s top interior lineman on offense or defense.

Jordan Davis, a native of Charlotte, N.C., is regarded as the most dominant defensive tackle in the nation for the undefeated Georgia Bulldogs (11-0, 8-0 SEC). In 11 games this season, Davis has 23 total tackles (nine solo, 14 assisted), 3.5 tackles for loss (12 yards), two sacks (10 yards), and nine quarterback hurries.

Davis joins offensive tackle Ikem Ekwonu and center Tyler Linderbaum as finalists. Below is more info on each candidate from the FWAA:

Jordan Davis, DT, Georgia (#99, 6-6, 340, Sr., Charlotte, N.C.): Simply put, Davis is the most dominant defensive tackle in college football for top-ranked Georgia (11-0). The Bulldogs own the nation’s second-best total defense giving up 236.3 yards per game and with Davis anchoring the interior line own the nation’s second-best rushing defense (77.2 ypg). Georgia is the national scoring defense leader (7.5 ppg) by more than a touchdown above second-place and has not given up more than 17 points in any game. Nobody has been able to run on Davis. Georgia has an Outland Trophy tradition on the defensive front. The Bulldogs’ lone Outland Trophy winner was also a defensive tackle, Bill Stanfill, in 1968 and boasted defensive tackle Andrew Thomas as a semifinalist in 2019. Defensive tackles have won two of the last four Outland Trophies: Quinnen Williams of Alabama in 2018 and Ed Oliver of Houston in 2017.

Ikem Ekwonu, OT, North Carolina State (#79, 6-4, 320, So., Charlotte, N.C.): Ekwonu has been ranked as the top run blocker in college football by Pro Football Focus and has more than 50 pancake blocks and 17 knockdowns.for the Wolfpack (8-3). He has earned the ACC Offensive Line Player of the Week twice this season. Protecting quarterback Devin Leary at left tackle, Ekwonu and N.C. State are 19th nationally in passing offense at 292.2 yards per game, fifth in the ACC and 11th among Power 5 schools. Leary is tied for 14th nationally in passing yards at 289.6 ypg. “He’s.nasty. He’s athletic. He’s big,” said Tim Hasselbeck of the ACC Network. Bruce Feldman of The Athletic calls him the most feared lineman in the ACC. “Ridiculous strength levels, athleticism and will to finish,” said Jordan Reid of ESPN. Ekwonu is N.C. State’s first Outland Trophy finalist. Jim Ritcher, a center, won N.C. State’s only previous Outland Trophy in 1979 before finalists were designated. Garrett Bradbury, a center, was a semifinalist in 2018. Offensive tackles have won the last two Outland Trophys: Alex Leatherwood of Alabama (2020) and Penei Sewell of Oregon (2019).

Tyler Linderbaum, C, Iowa (#65, 6-3, 290, Jr., Solon, Iowa): Linderbaum is one of the dominant linemen at his position for the Hawkeyes (9-2). He was the Second Team FWAA All-America center a year ago. The junior has started all 32 career games after playing on the defensive line as a true freshman. He moved to the offensive line following the 2018 regular season, and this season has a 94.8 offensive grade among centers by PFF, the best for a center since 2014. Iowa’s run game has improved, as Tyler Goodson became Iowa’s first 1,000-yard-season rusher since 2017 with a 132-yard output last week.

The winner of the 2021 Outland Trophy will be announced on The Home Depot College Football Awards on Thursday, Dec. 9 at 7:00pm ET on ESPN.

The No. 1 Georgia Bulldogs wrap up their regular-season schedule on Saturday, Nov. 27 on the road against the Georgia Tech Yellow Jackets. The game will be televised by ABC at noon ET.