The Georgia Bulldogs are #1 following crazy weekend in the SEC

The Georgia Bulldogs are #1 following crazy weekend in the SEC 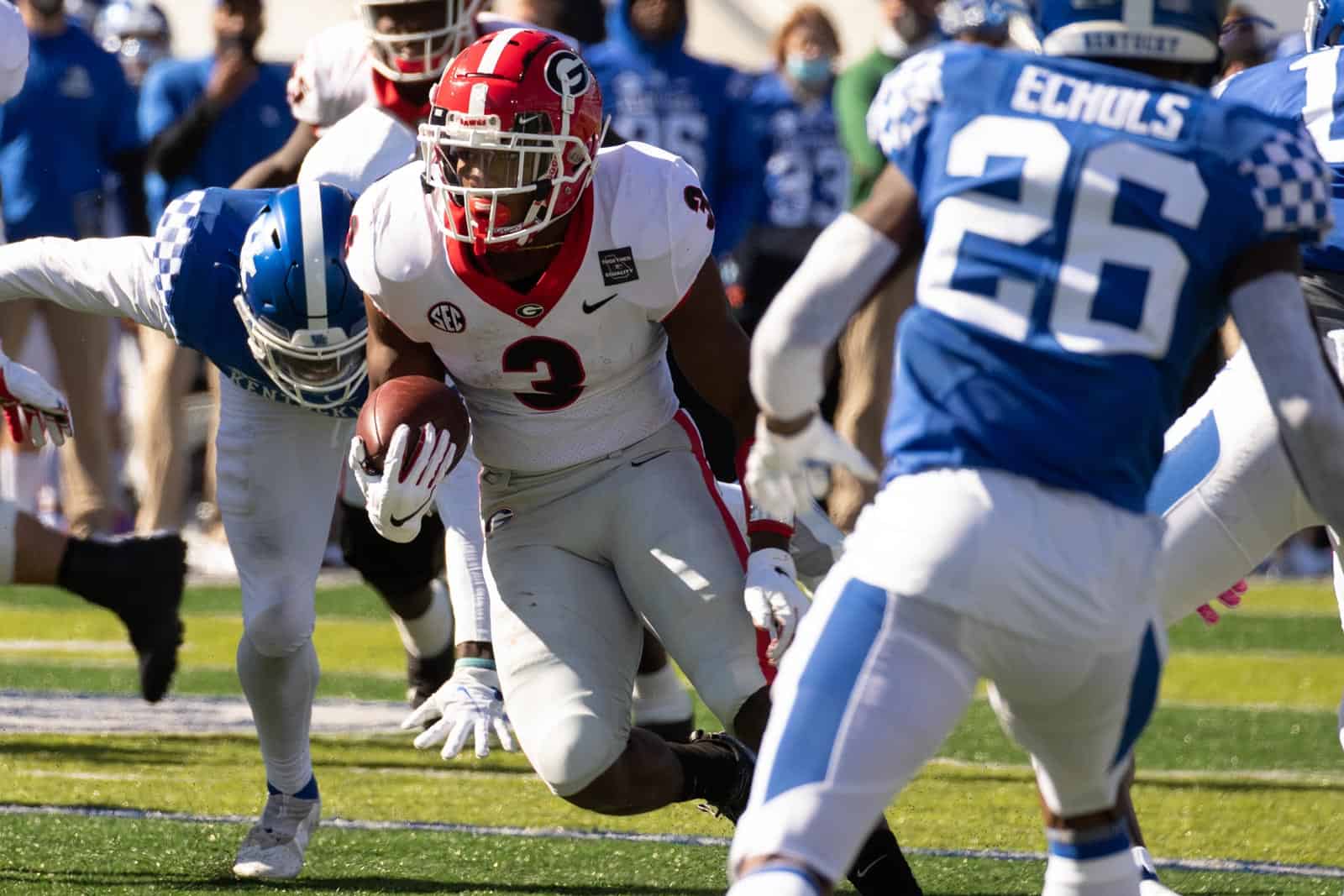 The Georgia Bulldogs are still undefeated after a wild weekend of SEC football. Nick Saban was finally beaten by a former assistant. Arkansas and Ole Miss went down to the wire. Kentucky is still unbeaten, and Florida bounced back from their second loss of the season. Most importantly, the Georgia Bulldogs are #1 in the country after taking care of the Tigers at Auburn.

Here’s a run-down of the week that was in the SEC.

The Kentucky Wildcats are now 6-0 following a 42-21 win at home against LSU. They went into the locker room at halftime up 0-14 and outscored the Tigers 21-28 in the second half. Junior quarterback Will Levis connected on 14 of 17 passes for 145 yards, finding the endzone three times. He also ran the ball 11 times for 75 yards and two rushing touchdowns.

While Kentucky gained an impressive 330 rushing yards as a team, Chris Rodriguez Jr. was the workhorse out of the backfield. The junior running back had 16 carries for 147 yards and a touchdown of his own. Wan’Dale Robinson was the leading receiver for the Wildcats with eight receptions for 60 yards and a score.

While the game wasn’t exactly close, Kentucky did allow the Tigers to move the ball. LSU passed for 261 yards and ran the ball for 147. No, those aren’t exactly huge numbers, but if the Cats want to be taken seriously as an undefeated team, there is room for improvement on the defensive side of the ball.

Kentucky will be in Athens against Georgia next week, and the Dawgs are much more explosive with the ball than LSU. So it might be a long day for the Wildcats next Saturday.

After both Arkansas and Ole Miss were beat down by Georgia and Alabama last weekend, the two teams had a shot at redemption in Oxford Saturday. The Bounce Back Bowl was all that it was hyped up to be and more. After keeping the Rebels out of the endzone during the first quarter, the Razorbacks went into the locker room at the half down 21-14. The two teams went blow for blow during the rest of the game.

Down by a touchdown, Arkansas was able to find the endzone on the last play of the game. Instead of kicking the extra point and settling things in overtime, Sam Pittman decided to go for two and end the game right there. Ole Miss was able to tighten up on defense and come away with a 51-52 win.

For me, one of the biggest takeaways was exactly how tough the Georgia Bulldogs are on the defensive side of the ball. They were able to keep Arkansas off of the scoreboard in the previous game. This weekend, against a quickly up-and-coming Ole Miss team, the Hogs scored 51 points and racked up 676 total yards.

Quarterback KJ Jefferson was able to connect on 25 of his 35 passing attempts for 326 yards, three touchdowns, and an interception. He also had 20 carries for 85 yards and three rushing scores. Treylon Burks reminded everyone just how explosive he could be catching the ball with 136 receiving yards on seven grabs and a score of his own.

Ole Miss quarterback Matt Corral had a heck of a game himself. He connected on 14 of 21 passes for 287 scores and two touchdowns. He also had 94 rushing yards on 15 carries with two more scores. Henry Parrish Jr. was the leading rusher for the Rebs with 111 rushing yards on 18 carries.

The Arkansas Razorbacks will be on the road against Auburn next week, while Ole Miss will take the field against the Vols in Tennessee.

Alabama goes down on a last-second field goal

Nick Saban was finally beaten by one of his former assistants following a 38-41 loss at Texas A&M against the Aggies. A&M was able to jump out in front early and go into the locker room at the break up 10-24.

The Tide’s defense was much stronger during the second half, but they didn’t have enough to stay on top of the Aggies. Alabama took their first lead of the game at 38-31 with 5:00 left in the fourth quarter on a seven-yard touchdown pass from Bryce Young to Jameson Williams. However, the Aggies answered back with a six-play drive of their own.

Quarterback Zach Calzada connected with Ainias Smith on a 25-yard touchdown pass, knotting the game at 38 with 3:00 left. After the A&M defense held Alabama to a three and out, Calzada led the Aggies down the field, setting up the winning field goal as time expired.

Alabama quarterback Bryce Young finished the game completing 28 of 48 passing attempts for 369 yards, three touchdowns, and an interception. Brian Robinson Jr. was a beast with 147 rushing yards on 24 carries. Wide receiver Jameson Williams was the go-to man for Young, hauling in 10 receptions for 146 receiving yards and two scores.

Sophomore quarterback Zach Calzada had a heck of a game for Texas A&M. He was able to connect on 21 of 31 passing attempts, tossing the ball for 285 yards and three touchdowns while being picked off once. A&M will be on the road next week at Missouri, while Bama will be on the road again against Mississippi State.

Next weekend for the Dawgs

The Georgia Bulldogs will be at home this Saturday ranked #1 against #11 Kentucky. It will be the fourth ranked opponent of the season for Georgia and their last game before taking the field against the Florida Gators in Jacksonville, Florida, on October 30th.