The Bulldogs topple the Tigers on the Plains

The Bulldogs topple the Tigers on the Plains 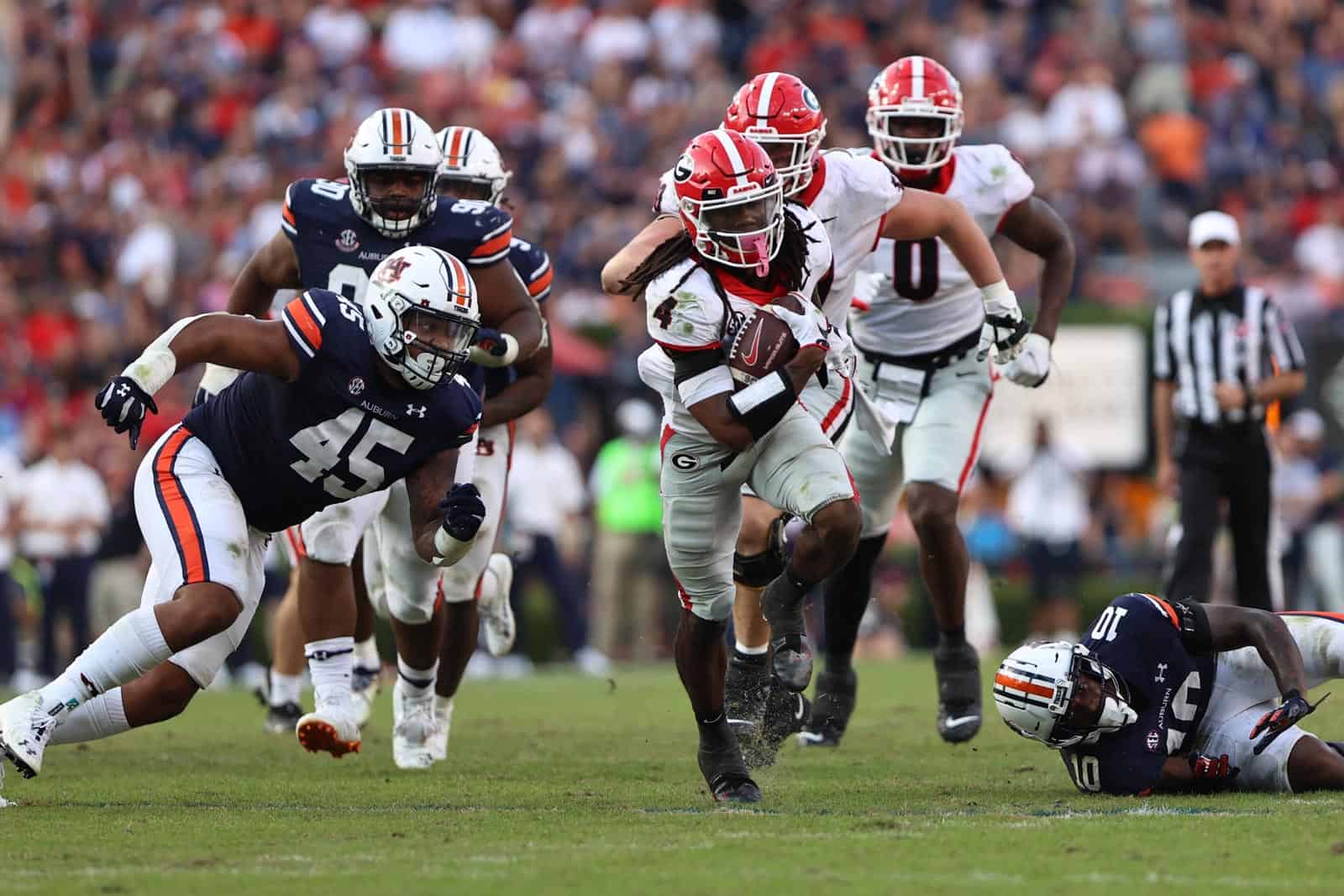 AUBURN, Ala. – The second-ranked Georgia Bulldogs traveled down to the plains of Auburn and left with a 34-10 victory over the 18th-ranked Tigers in front of 87,451 fans at Jordan-Hare Stadium and a CBS television audience.

The Bulldogs’ victory was their fifth straight over the Tigers and gave them a 62-56-8 all-time advantage in the 126th rendition of the Deep South’s Oldest Rivalry. Georgia has prevailed in 10 of their last 12 meetings with Auburn.

“What a tough environment to play in,” said Georgia head coach Kirby Smart. “I give a lot of credit to Auburn and their fans. They created an electric environment. For a lot of our players, probably over 50 percent or more, they have never played in a road environment. Two of our DNA traits are composure and toughness, and I thought that has never been more evident than it was today. Composure and toughness. The men in that locker room never doubt and never questioned each other.”

“Stetson played a hell of a game. He made plays with his feet. If you go back to that game, there are one, two, three, four really big plays in the game that he made with his athleticism. That’s a dynamic that he brings. it’s forces teams to defend us in other ways… I don’t think people give him enough credit for that. This was his first opportunity to come into this environment and play Georgia brand football. He made a lot of plays. He hit the guys who were open and helped us in the second half by doing a lot of run checks. I’m really proud of the way Stetson has led the team,” Smart said.

Georgia won the coin toss and deferred the choice to the second half. The Tigers came out fast covering 68 yards on 17 plays, and Auburn’s Anders Carlson hit a 24-yard field goal to give the Tigers a 3-0 lead. This marked the first time Georgia has trailed this season, as well as the first points the Georgia defense has given up on the opening drive. After a quick three-and-out by the offense, junior linebacker Nakobe Dean stepped up and intercepted Bo Nix in Auburn territory. Six plays later junior placekicker Jack Podlesny hit a 23-yard field to tie things up at 3-3.

The defense settled down and forced the Tigers to a three-and-out. Georgia responded with a touchdown on a nine-play 70-yard drive that was sparked by a 33-yard catch by freshman tight end Brock Bowers. Auburn safety Smoke Monday was ejected for a targeting call in the red zone, and one play later White went over the top for the touchdown. Note, Monday was also ejected in the first half of last year’s game in Athens.

On the next Georgia drive, Bennett unloaded on a pass and hit a wide-open McConkey for a 45-yard gain. Three plays later, Bennett found freshman receiver AD Mitchell for a three-yard touchdown to give the Bulldogs a 17-3 lead.

With just under two minutes left, Auburn drove the ball down the field to the Georgia seven-yard line. The Tigers drew the Bulldogs offsides and opted to bring the offense back out. The ensuing pass was broken up in the end zone by senior defensive back Latavious Brini resulting in a turnover on downs and a 17-3 halftime lead.

Georgia opened the second half with a 10-play drive but failed to score when Podlesny’s 43-yard kick hit the upright. The Bulldog defense forced Auburn to turn the ball over on downs, for the second time of the night. On the next play from scrimmage, Bennett hit McConkey for a 66-yard bomb, giving Georgia a 24-3 lead.

Auburn responded with a seven-play, 78-yard drive that ended with a six-yard touchdown run by Tank Bigsby. This marked only the second touchdown given up by the Georgia defense this season — the first rushing. The third quarter concluded with the Bulldogs up 24-10 and in scoring position.

The Bulldogs tacked on 10 more points on a 21-yard field goal and a 10-yard rushing touchdown by White en route to a 34-10 victory.

“Any time you come over here and play this team it’s a war,” said Bennett. “I think our offensive line and defensive line won the battle at the line of scrimmage. It was so much fun. I had a blast.”

“I love going on the road,” said senior defensive lineman Jordan Davis. “Auburn is always a great place to play. We just had that juice. Auburn gave us their best shot, but you know the defense, we stuck to our training… We have a mindset on defense: Nobody gets in our end zone. We preach it every week. Auburn caught us slipping for one touchdown with Tank (Bigsby). Hats off to them, but we hold ourselves to a high standard. When we get in that red zone… The offense wants to score, so we want to hold them to zero points or at least a field goal. We don’t want them to get a touchdown. That is our mindset on defense.”

*Another Dominating Day For The Defense: Georgia posted a 34-10 road win over No. 18 Auburn who came in averaging 40 points a game. Georgia came in leading the nation in Scoring Defense. The Bulldogs now have given up just 33 points on the year, the lowest six-game total since 1935 when they allowed 24.

The leading tackler today was redshirt sophomore Dan Jackson with six. Auburn became the first team to hold a lead on Georgia this season when it made a 24-yard field goal on its opening drive. Auburn failed to score on its next six drives of the first half as they ended with an INT, four punts and turned it over on downs.

Redshirt sophomore Zion Logue collected his first career sack, a loss of nine while junior Travon Walker had the other sack in the first half to give him two for the year. Junior Quay Walker picked up his first sack of the year in the second half while Robert Beal and Jalen Carter split a sack as well as the Bulldogs had four total today. Auburn scored only the 2nd TD allowed by the Bulldogs this season as Tank Bigsby ran in from four yards out to make it 24-10 in the 3rd. It was the first points the Bulldogs have allowed in the third quarter this year.

Bennett Leads Bulldogs To Another Win: Georgia QB senior Stetson Bennett improved to 7-2 as a starter including 3-0 this season. He got the nod in place of the injured JT Daniels (lat) and finished 14-for-21 for 231 yards and 2 TDs. He went 9-for-13 for 144 yards and 1 TD in the first half to build a 17-3 edge. In the second half, Bennett fired a 60-yard TD strike to Ladd McConkey for a 24-3 lead in the 3rd. Bennett also rushed for a career-high 41 yards today including a career-high 30-yard scamper.

Latest Big Road Win In The Series: With the 34-10 win over No. 18 Auburn, Georgia is now 22-11 versus top 25 teams under Kirby Smart including 3-0 this year. The Bulldogs have outscored their opponents 239-33 this season including 133-10 in their last three SEC games.

Rushing Attack Picks Up Steam In the 2nd Half: Georgia finished with 201 rushing yards today after tallying just 36 in the first half. Senior Zamir White led the team with 18 carries for 79 yards and 2 TDs. He had a one-yard rushing score and then added another on a 10-yard run to give him a team-leading six rushing scores and 20 for his career.

McConkey Headlines Receivers: Redshirt freshman Ladd McConkey had a career-long 60-yard TD reception and finished with five catches for 135 yards, both career highs. True freshman Adonai Mitchell (2 rec., 10 yards) got his 2nd receiving TD, a three-yarder for a 17-3 edge in the second quarter. Sophomore TE Darnell Washington, who missed the first four games due to a foot injury, notched his first catch of the season, a 25-yarder

Points Off Turnovers: Georgia scored 3 points off one INT while the Tigers did not force any turnovers. Junior Nakobe Dean notched his first career interception, getting it at the AU 26. It was the eighth for the Bulldogs. It led to a 23-yard field goal and a 3-3 game with 2:55 left in the first quarter.

For Starters & Game Captains: Georgia had one first-time starter in senior Adam Anderson (OLB). The captains were senior Quay Walker (LB), junior Warren Ericson (C) and senior Devonte Wyatt (DL). Georgia won the toss and elected to defer the football until the second half.