Bulldogs take down Tigers to open 2021

Bulldogs take down Tigers to open 2021

Led by a tough and aggressive defensive effort, the fifth-ranked Georgia Bulldogs opened their 2021 season with a hard-fought 10-3 win over No. 2 Clemson in the Duke’s Mayo Classic on Saturday night. 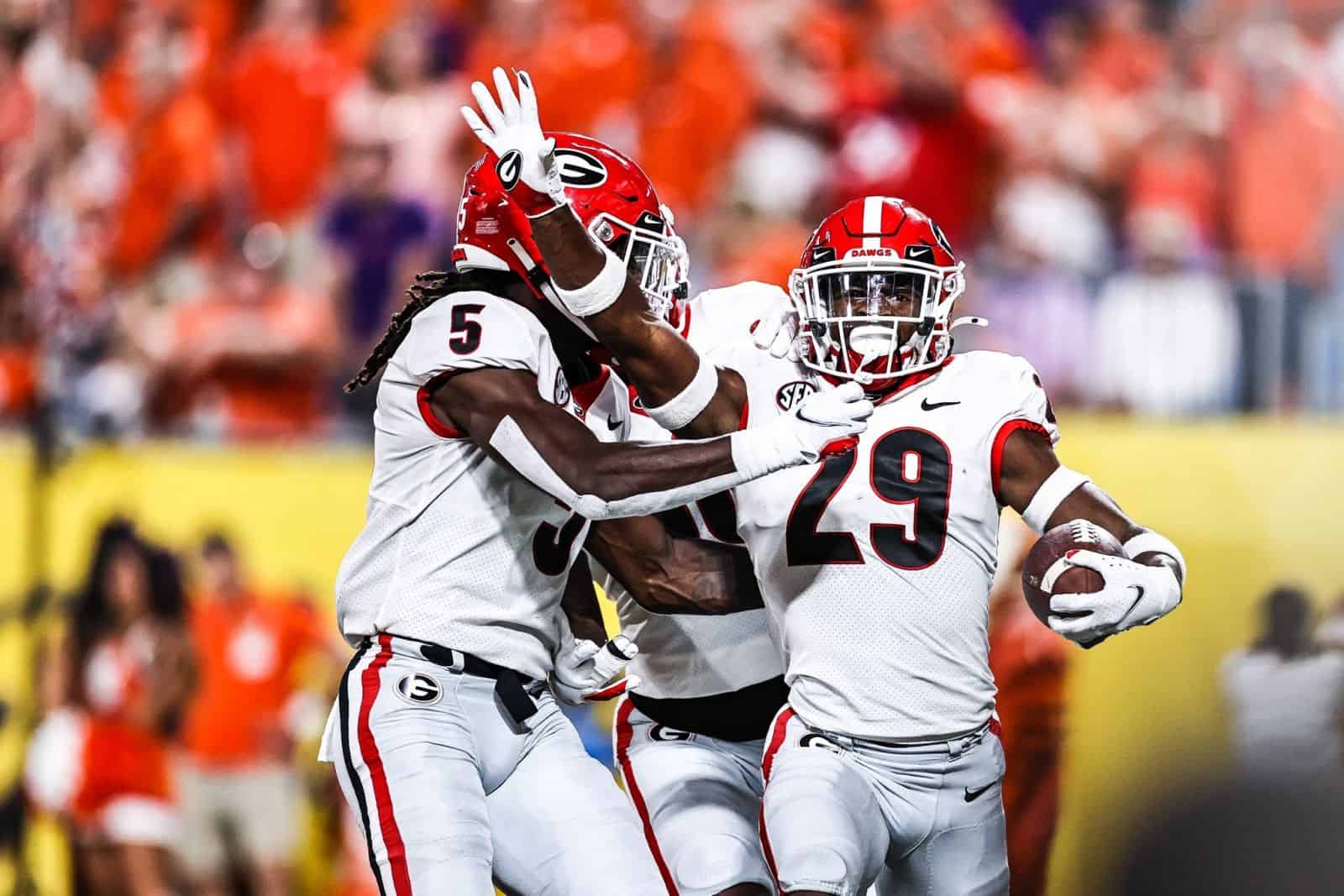 CHARLOTTE, N.C. — Led by a tough and aggressive defensive effort, the fifth-ranked Georgia Bulldogs opened their 2021 season with a hard-fought 10-3 win over No. 2 Clemson in the Duke’s Mayo Classic on Saturday night.

It was a packed crowd of 74,187 at Bank of America Stadium, nearly five times larger than the pandemic-restricted crowd at the Bulldogs’ last game, the Chick-fil-A Peach Bowl at Mercedes-Benz Stadium on Jan. 1, when 15,301 saw the Bulldogs pull out a 24-21 win over Cincinnati.

That wasn’t the offensive showcase that is so often the norm in modern college football and neither was Saturday’s smash-mouth opener. It was the defenses that dominated from the outset and throughout, particularly Georgia’s. The Bulldogs finished with 7 sacks and 8 tackles for loss, and one game-changing turnover.

It was only fitting that the first points of Georgia’s season came from the Bulldogs’ defense. With Clemson threatening after recovering a Bulldog special teams turnover, the defense blitzed and safety Christopher Smith stepped in front of Tigers receiver Justyn Ross to picked off quarterback D.J. Uiagalelei’s pass. Smith returned his first career interception 74 yards for a touchdown, putting Georgia up 7-0 with 2:58 left in the first half.

Georgia went into the half with the 7-0 lead, having outgained Clemson 105-90 and held the Tigers to a single yard rushing. The offenses had a little more success in the second half, but not much. Georgia finished the game with 258 yards of offense to 180 for Clemson.

Junior quarterback JT Daniels completed 22 of 30 passes for 135 yards and an interception. Six of those completions went to freshman tight end Brock Bowers, who led the Bulldogs with six catches for 43 yards. Senior Zamir White paced the running game with 74 yards on 13 carries.

After Daniels had a pass intercepted by Baylon Spector in the third quarter, Clemson started its drive at the Bulldog 33. The defense responded, getting a sack from defensive lineman Jalen Carter for a loss of 8, and then on third-and-long, linebacker Adam Anderson rushed in from the left side for a 3-yard sack to end the drive and force a punt.

Georgia’s offense started finding some space and success on the ensuing drive. White started it off with a 22-yard run and then Daniels hit wide receiver Jaylen Johnson for a 21-yard completion. The Bulldogs eventually moved the ball inside the 10 but couldn’t find the end zone, instead taking a 10-0 lead with 2:38 left in the third quarter on Jack Podlesny’s 22-yard field goal.

The defense got into the backfield and took down Uiagalelei again on the next drive, with linebacker Travon Walker sacking him for a loss of 9 on third-and-14. That was the Bulldogs’ sixth sack of the game and seventh tackle for loss.

Jake Camarda booted Clemson back to the Tiger 13 after the Bulldogs’ ensuing drive stalled. It was his fourth punt of the night and fourth that was caught or downed inside the 20. Camarda ended the game with five punts and an average of 43.4 yards per attempt.

The Tigers finally got on the scoreboard on the next possession, driving down to the 5-yard line and then settling for a 22-yard field goal that cut Georgia’s lead to 10-3 with 9:08 to play.

Clemson forced a Georgia three-and-out and took over at the Tiger 32 with 7:43. The Tigers drove inside UGA territory but on third and fourth down at the Bulldog 45, the defense came up with pressure and forced incompletions. Georgia’s offense then got the ball back with 4:49 to play and was able to run out the clock to secure the victory.

The Bulldogs are back in action next Saturday, starting off their six-game home schedule at Sanford Stadium against UAB. Kickoff is at 3:30 p.m.