Bulldogs fall at No. 11 Alabama

Bulldogs fall at No. 11 Alabama 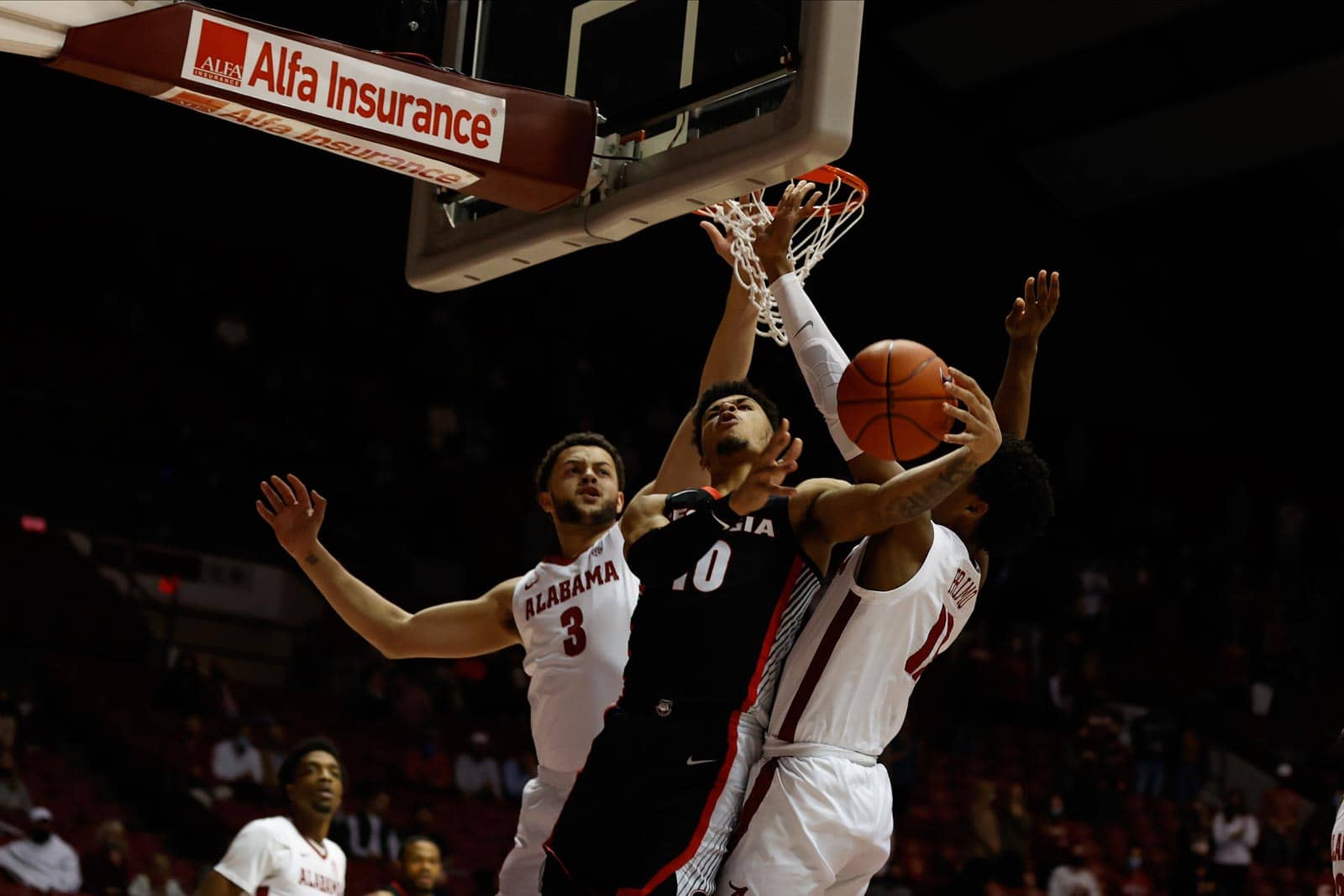 Tuscaloosa, Ala. – The Georgia basketball team was defeated by No. 11 Alabama on Saturday afternoon, 115-82 at Coleman Coliseum.

Sophomores Sahvir Wheeler and Toumani Camara both ended their afternoons with 16 and 12, respectively. Camara recorded his sixth double-double of his career finishing with 13 rebounds as well. Junior Tye Fagan concluded the contest with 11.

Graduate Justin Kier reached a milestone, after hitting a layup late in the game, securing his 1,300-career point. Sophomore Jaxon Etter set his career high in points as well with ninel.

With two of the most up-tempo offenses going head to head, points would come quickly and often. Camara started the game off sinking two free throws 13-seconds into the game and the back and forth would begin there. Alabama would hit two triples and a layup in but the Bulldogs would show sparks of their own with Wheeler hitting a deep-two and a Camara jam. Wheeler picked the pocket of Alabama’s Jaden Shackelford and the game would be knotted at eight at the under-16. Alabama would jump out to a 10-2 run that saw the Bulldogs trail by seven. Georgia’s defense stepped up and held the Crimson Tide scoreless for nearly two-minutes after their run to cut the lead their lead to three at the under-12. The tight contest continued with Johnson and Garcia cashing in from their trips to the charity stripe, mixed with a Camara layup brought lead within one. Alabama’s Keon Ellis and Shackelford would push that lead back out to seven after hitting back-to-back 3-pointers at the under-eight. Alabama would continue their run getting it out to a 9-2 run. A Johnson layup would end the short scoring drought that plagued the Bulldogs but Alabama was just too hot from behind the arc making five of their last six to give them the biggest lead of the game to this point at 11. Alabama would end the half making four of their last five shots, including seven of eight from three and would take a 13-point lead into the break.

Both teams start the second half making four of their last five with Johnson hitting his second triple of the afternoon in the process. Alabama would then go on a 5-0 run that was broken up by an Etter layup. Bulldogs would go on a 5-1 run showing some signs of life, but Alabama would jump out to a 5-0 run of their own giving them their largest lead to this point at 18. Bulldogs would go on to make three of their last four thanks to the combined efforts of Etter, Fagan and Andrew Garcia who converts an and-one to cut the lead to 14. Alabama pushed their lead back to 18. Etter would continue his scoring efforts, converting another and-one to cut the lead down to 15. Alabama’s Jahvon Quinerly would hit his third triple of the afternoon to push the lead back to 18 at the under-eight. Johnson and Camara kept the fight until the end, scoring the majority of the Bulldog’s point. Kier would see his first bucket of the game as well. Alabama’s offense was too much down the stretch jumping out to their largest lead of the game of 32, with the Bulldogs just not being able to recover from the deficit, ultimately falling 115-82.

Georgia will return to Stegman Coliseum for a contest against Missouri on Tuesday, Feb. 16 with first tip set for 6:30 p.m. and television coverage provided by SEC Network.