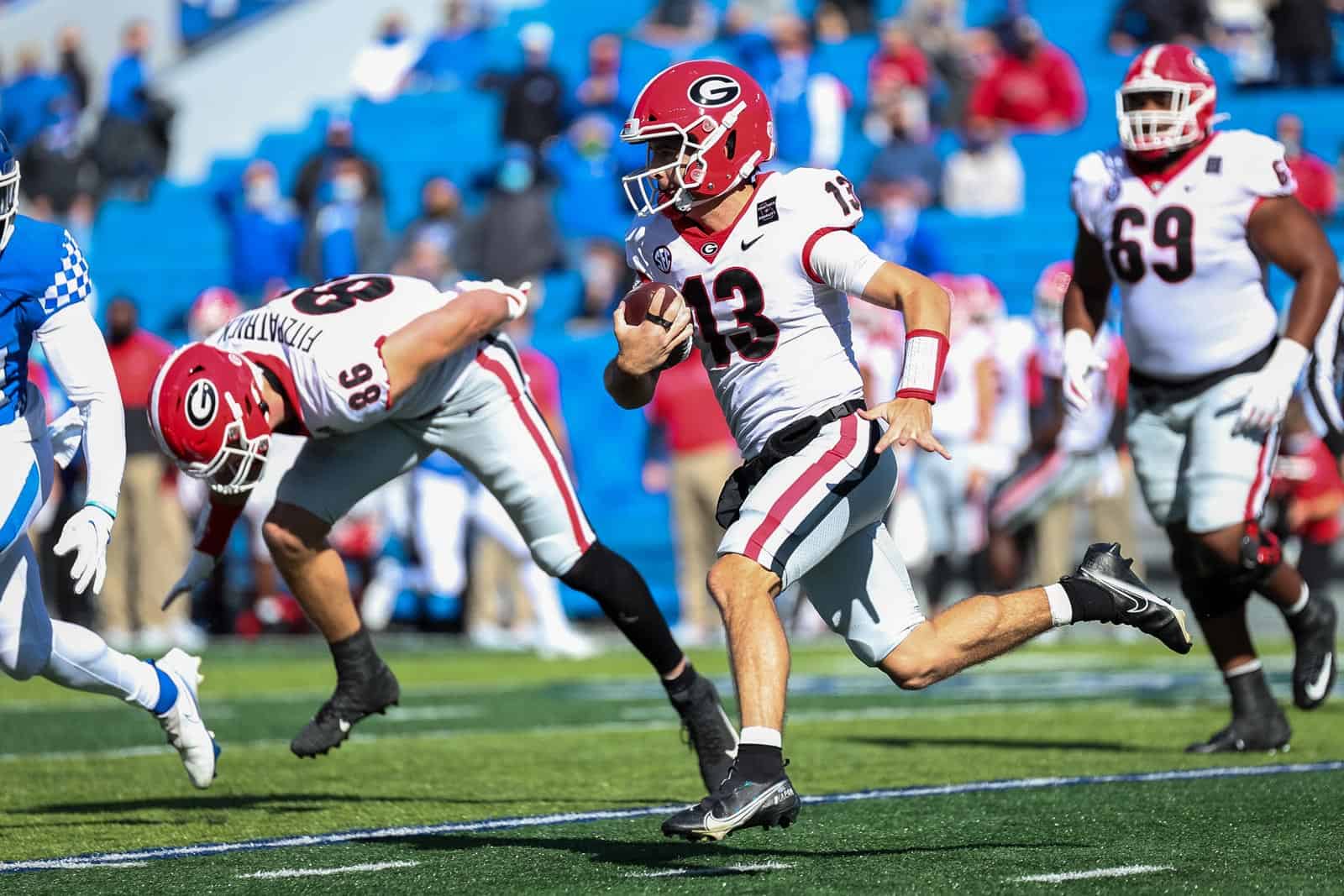 LEXINGTON, Ky. – Despite only producing two scoring drives, the fifth-ranked Georgia Bulldogs (4-1, 4-1 SEC) rode their outstanding defense to a 14-3 victory over the Kentucky Wildcats (2-4, 2-4 SEC) Saturday afternoon in front of 12,000 spectators at Kroger Field and an SEC Network television audience.

Redshirt sophomore Zamir White led the Georgia offense with a career-high 136 yards rushing on 26 carries and a touchdown. Redshirt junior quarterback Stetson Bennett finished 9-of-13, passing for 131 yards and rushing for a touchdown. Junior tailback James Cook led in receiving for the second-consecutive game, hauling in four catches for 62 yards. Overall, the Georgia offense amassed 346 yards despite possessing the ball for 10 fewer minutes than Kentucky.

In a terrific effort, the Georgia defense only allowed 229 yards of offense and 15 first downs, along with causing four sacks and a fumble. Sophomore linebacker Nakobe Dean led the unit with a career-high 14 tackles, while senior safety Richard LeCounte also notched a new career high with 13 tackles and a fumble recovery.

“We executed well at times,” said head coach Kirby Smart following the game. “We ran the ball against a really good, physical Kentucky defense. I was pleased with that. It’s hard to make yourself throw when you’re running successfully.”

After forcing a Kentucky punt on its first possession, Georgia quickly established itself on the ground, rushing on every play on the way to a 2-yard touchdown run from Bennett. The 12-play, 86-yard drive took over five minutes off the clock and gave the Bulldogs an early 7-0 lead midway through the first quarter.

Following a pair of punts from each team, Kentucky embarked on a marathon drive of its own that drained much of the second quarter clock. The Wildcats kept the drive alive with a 4th-and-1 conversion on the Bulldogs’ 43-yard line, but the Georgia defense held firm in the red zone, culminating with a Travon Walker sack of quarterback Joey Gatewood. Kentucky grabbed its lone points of the game with a 34-yard field goal from Matt Ruffolo, finishing off the 19-play, 77-yard sequence that lasted over 10 minutes.

“(Kentucky) did a great job (of shortening the game),” said Smart. “They know that they were probably overmatched, and they shrunk the game. They ran the quarterback and they didn’t take many chances, but they stayed on schedule.”

The Georgia offense finally returned to the field in impressive fashion as Bennett found Cook for a 46-yard completion that was then bolstered by consecutive strong rushes from White, moving the ball to the Kentucky 10-yard line. However, the drive was cut short as Bennett’s pass was tipped for an interception by Kentucky’s Phil Hoskins at the 21-yard line. While the Wildcats were unable to convert on the turnover, the Bulldogs also came up empty as redshirt sophomore place kicker Jack Podlesny’s 53-yard field goal attempt was blocked at the end of the half.

On the opening possession of the second half, Georgia came out firing as Bennett connected with freshman tight end Darnell Washington on a 33-yard reception into Kentucky territory. Facing 4th-and-1 at the Wildcats’ 22-yard line, White broke through the line for a season-long 22-yard touchdown run, concluding a 7-play, 75-yard scoring drive.

Kentucky crossed into Georgia territory on the ensuing drive, but senior linebacker Monty Rice forced a Gatewood fumble that was recovered by senior safety Richard LeCounte at the 36-yard line, the sixth fumble recovery of his outstanding career. The Bulldogs reached midfield on the following drive, but the momentum was cut once again as Bennett was intercepted by Kelvin Joseph on a deep throw to the Kentucky 18.

Luckily for the Bulldogs, the defense remained stout throughout the game, forcing another Wildcat punt on the next drive. In the fourth quarter, the Wildcats looked to cut the deficit with another long march into Bulldog territory, but an incompletion on 4th-and-6 gave the ball back to Georgia with four minutes remaining in the game.

On their final possession, the Bulldogs were stopped on 4th-and-3 near the Kentucky red zone, but a pair of holding calls led to the Wildcats running out the clock to close the contest.

Georgia will now turn its attention toward a critical SEC East matchup against No. 8 Florida (2-1, 2-1 SEC) next Saturday, Nov. 8 at TIAA Bank Field in Jacksonville, Fla. The annual rivalry game will kick off at 3:30 p.m. and will be televised on CBS.

*Defense Limits Wildcats To A FG:  Fifth-ranked Georgia blanked UK in the second half in helping post a 14-3 victory and improve to 4-1. UK finished with 229 yards of total offense on 64 plays. In the first half, the Wildcats ran 33 plays and tallied 121 yards of total offense. Coming in today, Georgia ranked 2nd in the SEC in Scoring Defense at 19.5 points per game while UK was averaging 24.4 points a game. Last year, Georgia blanked the Wildcats 21-0 in the rain.

Georgia sophomore Nakobe Dean had a team-high and career-best 14 tackles while senior Richard LeCounte had a career-high 13 stop plus he recovered a fumble and had three pass breakups. Also of note, senior Devonte Wyatt tied his career high with seven stops, all in the first half.

Redshirt sophomore Azeez Ojulari had his team-leading fourth sack to stop UK’s second drive of the contest. Later, he combined with Adam Anderson for another sack to give him 10 in his career. Senior Jermaine Johnson had his second sack of the season and now 4.5 for his career. Sophomore Travon Walker notched his first sack of the year and 3.5 for his career.

*The Running Game: The Bulldogs utilized the running game, tallying 215 yards on 43 attempts. Sophomore Zamir White set career highs with 26 attempts for 136 yards and one TD. Georgia’s opening TD drive featured all running plays, 12 total, and covered 86 yards in 5:06. Bennett capped the drive with a two-yard score. Georgia’s first pass attempt came on its 16 play of the game although there was one scramble by Bennett on the opening touchdown drive on the fifth play when he was looking to pass. In the second half, White added a 22-yard TD run on 4th-and-1 to make it 14-3 with 11:38 left in the 3rd quarter. White notched his first 100-yard game, and the first by a Bulldog since D’Andre Swift (103) against Texas A&M last year.

*Another Road Win: Junior Stetson Bennett (9-for-13, 131 yards, 2 INTs, 1 rushing TD) directed No. 5 Georgia to a 14-3 road win as the offense posted 346 yards on 57 plays. In the first half, the Bulldogs ran just 28 plays with three possessions: the first resulted in a TD followed by a punt and then an interception. The Wildcats led in the time of possession 19:17 to 10:43 in the first half. Bennett did have a 46-yard pass to junior RB James Cook. His first interception came on a tipped pass that stopped a scoring drive as the Bulldogs had reached the UK 10 late in the second quarter. To start the second half, Georgia marched 75 yards on seven plays in 3:22 for a TD and a 14-3 lead. On the drive, Bennett had a 33-yard completion to freshman Darnell Washington. On a 4th-and-1 at the UK 22, Zamir White ran it in for a TD, his sixth of the year and ninth of his career. Cook led the team in catches with four for 62.

*Special Teams Summary: Redshirt sophomore PK Jack Podlesny went 2-for-2 in PATs overall and a 53-yard field goal attempt to end the first half was blocked following a low snap. Podlesny is 8-for-11 in field goals including hitting a pair from 50-plus yards this year.  Georgia now has made an NCAA record 308 consecutive PATs as the streak includes six kickers dating back to 2014.

Junior punter Jake Camarda finished the first half with one punt for 54 yards and placed it at the UK 7 with no return. In the second half, he punted once, a 41-yarder with no return that he placed at the UK 10. For the second straight game, he took care of the kickoffs. Coming in today, Camarda ranked No. 2 nationally in punting (50.7 avg.) and the team is third in Net Punting (47.9). Today, he finished with an overall and Net Average of 47.5 average.

*No Points Off Turnovers: Georgia forced one turnover, a fumble in the second half, and it led to an interception. UK got no points off two Bulldog miscues.  The fumble was caused by Monty Rice (his second of the year) and recovered by Richard LeCounte, his first this year, at the UGA 36.

*Series History: With the win, Georgia owns a 60-12-2 edge in the series that dates back to 1939. Georgia now has won 11 straight, which marks its longest stretch of success in the series. The teams have played annually since 1956.

*For Starters:  Junior Money LB Quay Walker and freshman WR Marcus Rosemy-Jacksaint made their first career starts while junior WR Trey Blount made his first this year and second of his career (only other came in 2017 SEC Championship Game). The longest active starting streak on offense belongs to center Trey Hill now with 23 while Richard LeCounte leads the defense with 23 straight and 33 for his career.  Senior Monty Rice saw his starting streak end at 18. Georgia did not have any penalties in the first half while UK had three for 24 yards.

*Captains: Georgia senior Malik Herring and juniors Eric Stokes and Trey Hill served as the captains. Georgia won the toss and elected to defer until the second half.