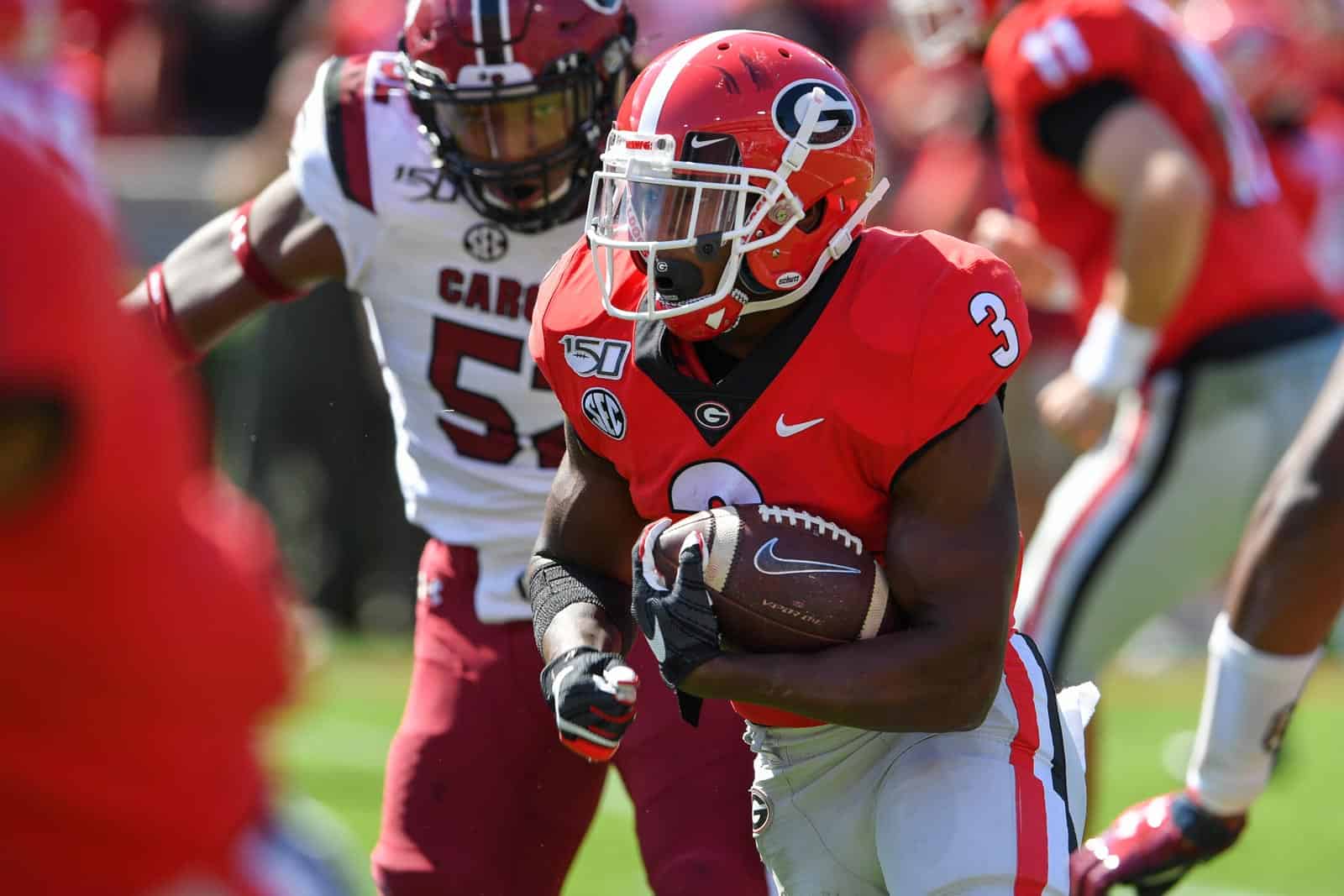 It could be argued that when Kirby Smart was hired at UGA before the 2016 season, his most important hire was offensive line coach Sam Pittman. Fast forward to the 2020 season, and Pittman and the Arkansas Razorbacks will be hosting his former boss and team when they square off with the Bulldogs.

Both coaches will be surrounded by new faces as they both made impressive hires to their coaching staff. Since Pittman’s departure, the Bulldogs brought in Todd Monken (OC), Matt Luke (OL), and Scott Cochran (ST). The Bulldogs also added one of the top young offensive minds with the hiring of Buster Faulkner.

Pittman did a phenomenal job of bringing in a top-notch staff despite it being his first head coaching job. He is known as a great player recruiter, but he proved he could do it with coaches as well with the hiring of DC Barry Odom (Former Mizzou HC) and Kendal Briles (FSU).

Arkansas’ new OC Kendal Briles arrives with high expectations and several playmakers. However, he is taking over the least efficient offense in the SEC over the past two seasons. He will have the most explosive running back in the SEC last season in Rakeem Boyd, who was first in the SEC (2nd in FBS) in touchdowns over 50-yards. Boyd posted five on the season and no other SEC running back had more than two.

The Razorbacks will also have a new quarterback, but one UGA is very familiar with in Florida Gators transfer Feleipe Franks. It is not likely that Franks will be a Heisman candidate this season, but he is a major upgrade for the Razorbacks. In his past 15 starts, Franks has thrown for 3,155 yards and 29 touchdowns. He also posted a 12-3 record during that span. The problem is that he hasn’t been very well against UGA. In two starts, he has combined for 20-of-40 passing for 135 yards, one touchdown pass, and two interceptions. Florida was defeated in both games by a combined score of 78-24.

Coach Briles will try to ease some of the pressure with stud wide receiver Treylon Burks. The 6-3, 232-pound wide receiver led the Razorbacks with 29 catches for 475 yards as a freshman. Burks is a threat in every aspect of the offense and a threat as a returner on special teams. This is why he finished second on the team in all-purpose yards with 866.

This is from a team that only gave up 18 or more points one-time last season, and they will be even better this season. The job defensive coordinator Dan Lanning is doing cannot be overstated.

Although Pittman will have this Arkansas line much improved, I expect the UGA defensive line to hold serve while releasing edge rushers Nolan Smith and Azeez Ojulari to disrupt the backfield.

With nine of their 10 deep rotation back at linebacker, Boyd could be running into a brick wall all day. Remember, this is the same defense who has not given up a rushing touchdown to a running back in 665 days. The last time was the second quarter of the 2018 SEC Championship Game to Alabama running back Josh Jacobs.

Richard LeCounte III with Eric Stokes and company should have no problem limiting the Arkansas passing game as long as they don’t take any plays off against Burks.

It has been a long time since the Bulldogs have entered a season with this many question marks on the offensive side of the football. The offensive line should be deep and dominant, as well as the running backs led by Zamir White and James Cook. Expectations are high for White who is the former no. 1 running back recruit in the nation. While he only had 78 carries last season, he led the Bulldogs in missed tackles per run. If he can return to 90 percent of the player he was before his two ACL injuries, he could be the next in line for greatness at Running Back U. Watch out for Cook as well as he looks like he has added some good weight and has the skill set to be a force in the Monken system.

The biggest question of course is who will play quarterback. Expectations were high for Jamie Newman before he abruptly opted out. The general consensus was that USC transfer JT Daniels might have won the job anyway. Then a curveball out of left field came that it might be D’Wan Mathis who is the new QB1 despite only being a year and half removed from undergoing emergency surgery for a potentially life-threatening brain cyst.

The truth is, I have no idea who the QB is going to be. However, they only have to be serviceable in most of UGA’s games. Last season the Bulldogs won despite their offense. Against their last seven SEC opponents, the Bulldogs only averaged 19.8 PPG.

This season they will be better by play calling alone. There was no better trade in the NCAA than James Coley for Monken, Luke, and Faulkner. The Bulldogs have gone from the worst play caller in the league to three of the brightest minds in one room.

For the QB, the option is simple. Find a way to get the ball into George Pickens’ catch radius. There should be no doubting he has the best hands in the SEC and perhaps the best in all of college football. Last season as a true freshman, he had no drops on 49 catchable targets. That is an astonishing number. Only 49 passes were thrown to him that were deemed catchable. He caught every single one of them, 49, for 727 yards, and eight touchdowns.

New coordinator Barry Odom will turn this ship around for the Razorbacks but it is going to take time. He takes over a unit that ranked 110th in total defense and 122nd against the rush.

Odom will have to find a way to get more pressure on the QB this season but he will have Dorian Gerald back who only played in one game with an artery issue in his neck. If he can return to form, and Mataio Soli takes another step forward, that would be huge for the Razorbacks. Despite being a freshman, Soli started the last 11 games and finished with 19 tackles, nine solo, and two quarterback hurries.

Not a whole lot of talk for either team headed into week one on special teams. The Bulldogs do have Jake Camarda who is a preseason All-SEC selection at punter after averaging 46.8 yards-per-punt, which was good enough for sixth best in the nation.

The most pressing question for UGA is who will replace Lou Groza Award winner, and social icon, Rodrigo Blankenship, who connected on 27-of-33 field goals last year.

Arkansas will likely have Duke Grad transfer AJ Reed. This past season, Reed went 15-of-18 on field goals and 34-of-34 on extra points. They will also look to a transfer at punter as well in former Michigan Wolverine George Caratan. Although he never played in a game at Michigan, he did average 46 yards per punt at St. Thomas More School in Connecticut before joining Michigan in 2018.

I expect Monken and the offense to show a few wrinkles to get ready for the Auburn game next week. However, I think we will see a heavy dose of the run game. Arkansas will not be able to move the ball against UGA with any consistency. As a result, I think Kirby just wants to leave Arkansas with a good win, no injuries, and without embarrassing Coach Pittman.