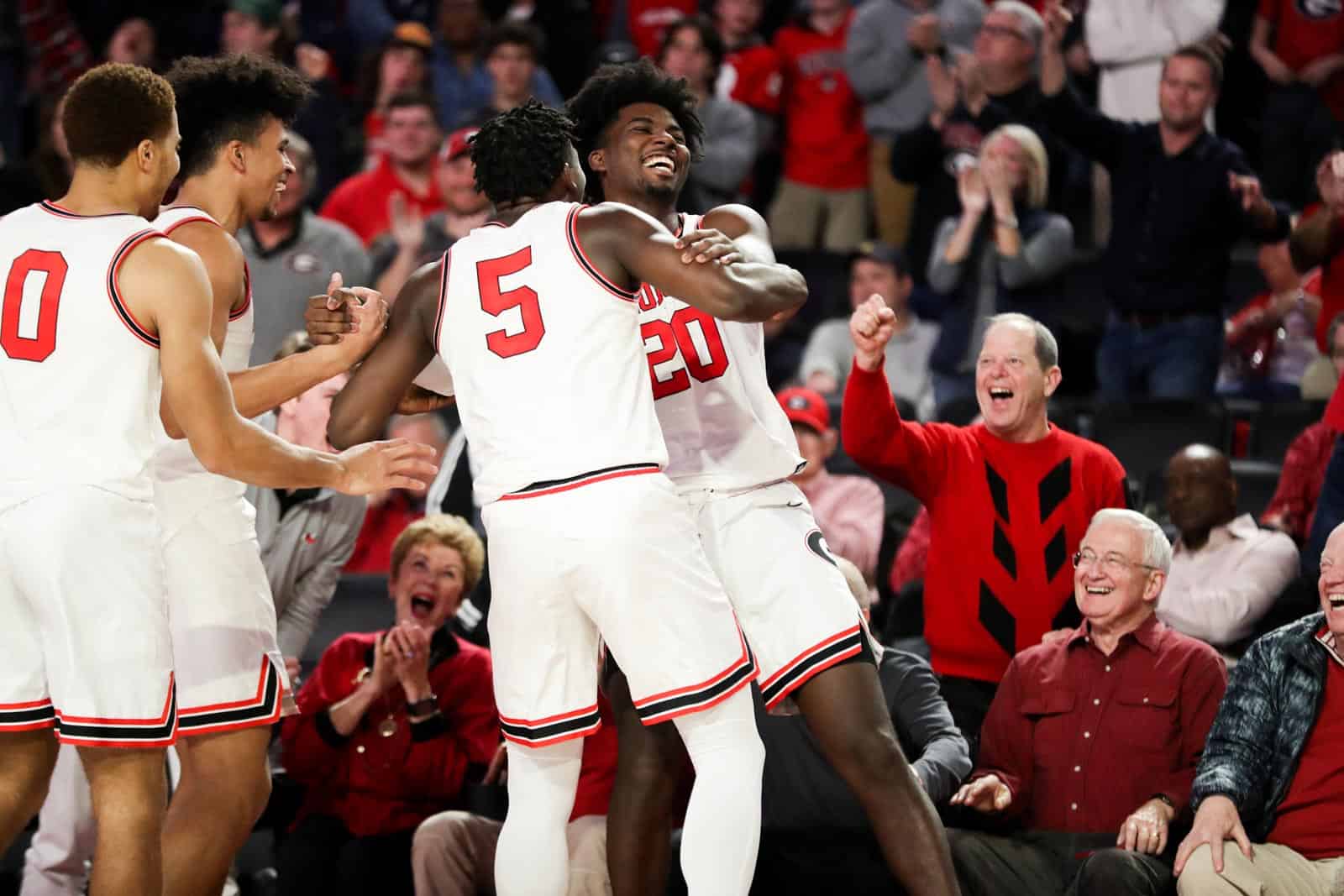 ATHENS, Ga. – The Georgia Bulldogs defeated the Austin Peay Governors, 78-48, in their final home non-conference game of the 2019-20 campaign on Monday night in Stegeman Coliseum. A crowd of 9,800 was on hand for the Bulldogs’ final game of 2019.

Junior Rayshaun Hammonds paced Georgia in scoring with his 17 points. Graduate transfer Donnell Gresham Jr. joined Hammonds in double digits with 11 points, including a 3-of-4 shooting performance from beyond the arc. Before tonight, Gresham had only made three 3-point shots on the season.

Freshman Toumani Camara led Georgia in rebounding, grabbing a career-high nine boards to go along with his eight points. As a team, the Bulldogs dominated on the glass, winning the rebounding battle 50-30. The 40 defensive rebounds marked a season high and was the second-most by a Georgia team since 2010.

“I thought we turned it up in the second half… our guys came out and defended,” Georgia Head Coach Tom Crean said. “We shot the ball better. Donnell Gresham making some 3-pointers certainly helped. The rebounding got better. We had team rebounding which is exactly what we need to have to be successful. The bottom line is that’s what has to happen for us. We have to be a team in the sense of how we defend, how we rebound, everyone out and running, and everyone cutting and moving without the ball. We did some really good things in the second half.”

Georgia got off to a quick start with Camara and Hammonds accounting for the Bulldogs’ first 10 points in five minutes of play. Hammonds recorded the first four for Georgia and Toumani tacked on the next six, including a fast-break dunk. Georgia grabbed the first basket of play and would lead for the remainder of the contest.

After going 6-of-6 from the field in a 12-2 run, while forcing four Governor turnovers in 4:14 minutes, Georgia took its first double-digit lead of the contest, 14-4, with 14:59 remaining in the opening period.

With 8:31 to play in the first half, the Bulldogs were able to gain their largest advantage up to that point of 15 after holding Austin Peay to no field goals for nearly four minutes.

The Governors were able to cut their deficit to five as the result of a four-minute scoring drought for the Bulldogs. Georgia went into the locker room leading 31-26 following the Austin Peay shot at the buzzer.

Within two minutes out of the locker room, the Bulldogs were able to regain the double-figure advantage on a basket from freshman Sahvir Wheeler.

The Bulldogs gained their first 20-plus point lead off a 3-point shot from Gresham, his second, with 12:12 remaining in the final half. These two baskets were part of an 11-0 run that, in combination with a 4:27 scoring drought for the Governors, led to the 50-28 Georgia lead.

The Bulldogs were able to maintain the 20-plus point lead for the remainder of the contest, outscoring Austin Peay 47-22 in the second half. A layup from freshman Mike Peake with 38 seconds remaining propelled Georgia to a 30-point victory, 78-48.

Up next, the Bulldogs travel to Memphis to take on the No. 9 Memphis Tigers for its final non-conference game on Saturday, Jan. 4, at 1 p.m. The matchup will be televised on CBS. Georgia will return to Stegeman Coliseum Tuesday, Jan. 7, to open SEC play against No. 17 Kentucky at 9 p.m. That contest is already a sell-out, one of six sell-outs the Bulldogs have among their nine league home games.

• Georgia improves to 8-0 at Stegeman Coliseum with 78-48 win over Austin Peay.

• Rayshaun Hammonds scored double-digit points for the 41st time in his career and eighth this season.

• Toumani Camara had a career-high in rebounds, tallying 9. He led Georgia on the glass for the first time in his career.

• Donnell Gresham Jr. had a season high three, three pointers. Prior to this game, he had three all season.

• Gresham Jr. joined Hammonds in double digits. This is the 32nd double-digit performance of his career and the third this season. The first 29 were while he played at Northeastern.

• Tonight’s performance from behind the arc marks the highest 3-point percentage the Bulldogs have had in a win at 31.1 percent. The highest this season was 38.7 percent against Michigan State.

• The Bulldogs outscored Austin Peay 47-22 in the second half for the largest margin of points in a half.

• Georgia allowed its fewest points this season and the lowest since Jan. 6, 2018 against Alabama who scored 46.

• Georgia pulled in 40 defensive rebounds, a season high for the Bulldogs and second-most by a Georgia team since 2010.

• Mike Peake and Stan Turnier both blocked their first shots of the season, each recording one.

On the second half…
“I thought we turned it up in the second half…Our guys came out and defended. We shot the ball better. Donnell Gresham making some threes certainly helped. The rebounding got better. We had team rebounding which is exactly what we need to have to be successful. The bottom line is that’s what has to happen for us. We have to be a team in the sense of how we defend, how we rebound, everyone out and running, and everyone cutting moving without the ball. We did some really good things in the second half.”

On the crowd…
“We’re not doing this without our fans. I mean 9100 average. We’re almost 1000 more than last year at this point, and last year we set an attendance record! So with six of the nine SEC games already sold out, we’re getting there…We don’t want to disappoint these fans. I thought our fans were great, and we got better in the second half.”

On what was said during halftime to start out the second half outscoring Austin Peay 19-2…
“Just play hard. Play great defense and stay together the whole time. That was basically what was said in so many words.”

On what was working on defense tonight…
“Communication. Talking. Helping each other out. That was the main focus. Just working together helping our teammates out. If they get beat, help them. Switching screens and things like that.”

On if defensive play is the next step from taking them from a good team to a great team…
“Yeah. Basically, what you said. Defense is translating to offense. When you stop teams, you can score. The main focus is stopping teams and trying to score so that’s our main focus.”

On scoring three, threes in four possessions…
“I don’t think anything got into me, I think my teammates just saw me in the open spots and I just took the shots that were there. I knew that my teammates would find me.”

On making a three in the same spot right after he missed it…
“I just took the shot because I felt I was open a little bit. The first one didn’t go but I have confidence in myself to make the next one. My teammate, I think Sahvir [Wheeler], found me on that base line out of bounds so I appreciate that.”

On what he expects to see in conference play…
“A very competitive league. We believe that we have a good chance to beat any team as long as we play together and we play hard. I think we get ready for Memphis and look forward to conference play.”