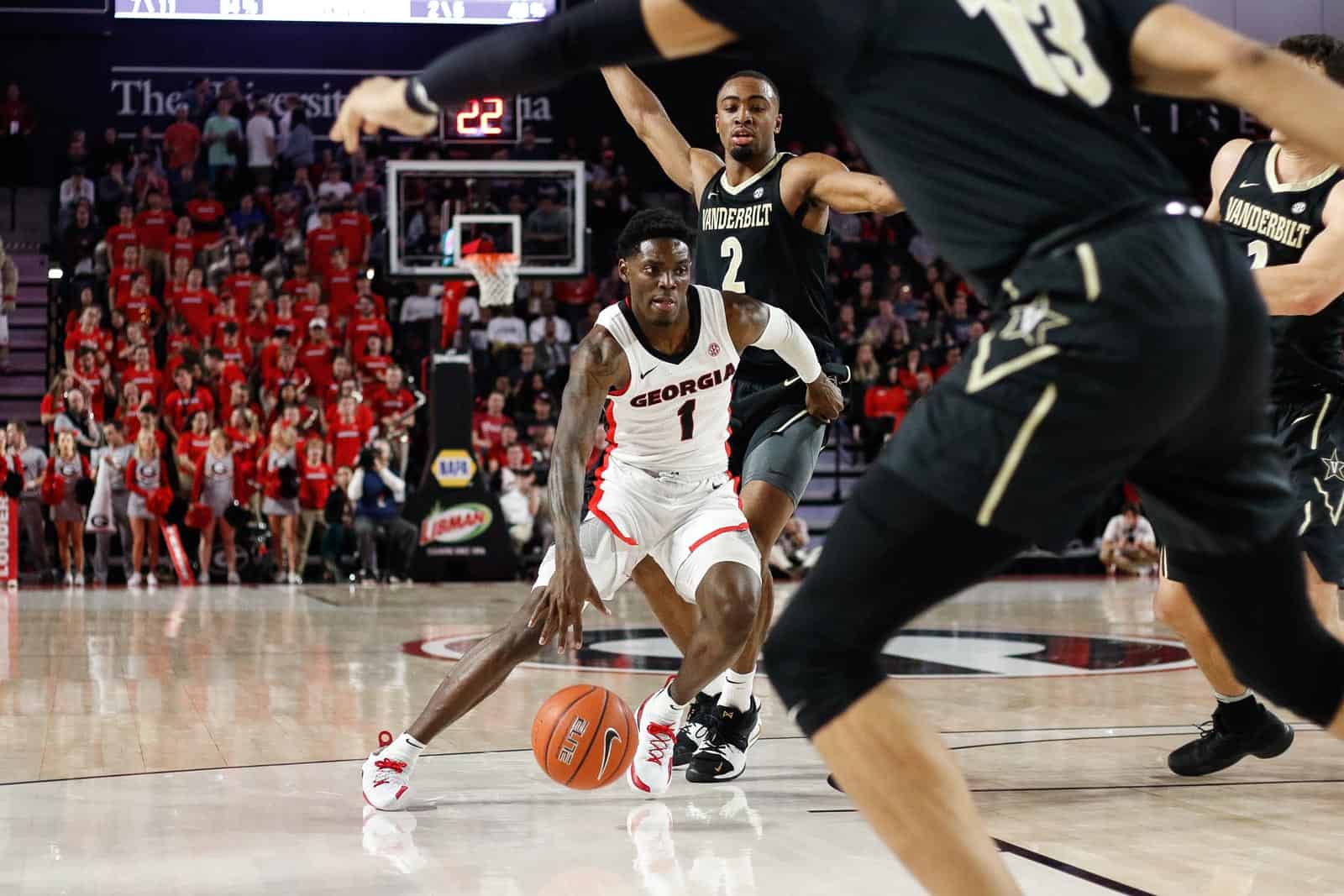 “The last thing I wanted was a group of guys not confident,” said Georgia head coach Tom Crean. “That was going to be the key especially after Saturday’s game. We needed to look at the film, and it needed to pierce guys a little bit. This is not the character or mentality that we want to play with. We came out in practice to build confidence, and they did that. What I was proud of was that we didn’t take any trips off on the defensive end. We got beat on the dribble a couple times, but to hold this team to 24 percent from three, 33 percent overall, and get thirty-nine deflections, that’s good defense. That’s the maturity that we have to have.”

Georgia (9-5, 1-1) started the night with a jam from Ogbeide to put the Bulldogs on the board. Both teams exchanged baskets in the first five minutes but Georgia maintained the lead. A pair of free throws from Claxon brought Georgia into double-digits, 10-6, at 14:51.

Both teams traded baskets, with Vanderbilt  (9-5, 0-2) taking the lead at 12:25. The back and forth continued until the two-minute mark when a three from freshman Ignas Sargiunas inked the Georgia lead at 33-31. Claxton added a free throw and the Commodores sank two of their own to head into the half trailing Georgia 34-33.

Within 15 seconds of coming back to the court, Hammond sunk a three to bring the score to 37-33. Vanderbilt answered with back-to-back scores to notch the game, before Ogbeide recaptured the lead. The Commodores tied it again at 39-all for the eighth and final time of the game. Again, Ogbeide layup brought Georgia over the tie margin, which ultimately didn’t change for the rest of the game.

Two free throws from Hammonds ignited a 12-0 run comprised of four Bulldogs to build the Georgia lead to 74-57 with 4:08 left to play. Crump added two free throws to notch the largest lead of the night of 21 points at 81-61 with less than a minute left. The Commodores finished off the scoring with two free throws in the last 30 seconds as Georgia sealed its home conference opener 82-63.

The Bulldogs travel to take on the Auburn Tigers Saturday, January 12 at 4 p.m. on ESPN2.

• Another big crowd at Stegemen Coliseum with 9,429 fans. Through eight home games this season, Georgia has averaged 8,182 fans, which is the most since the 2002-03 season.

• Through 14 games this season, Nicolas Claxton has surpassed his block and rebound total of 2017-18.

• Blocks continue for Claxton as he added five to total a SEC-leading 44 blocks on the season for an average of 3.1 a game – also atop of the SEC. He has 27 multi-block games in his 47-game career. He has four 5-block games in his career, all coming this season.

• Rebounds continue for Nicolas Claxton as he had a team-high 12 boards for a SEC-leading 139 total rebounds which moves his average to 9.9 rebounds per game – also atop of the SEC.

• For the 11th time this season, Georgia outrebounded its opponent. Tonight it was a slim edge of 43-41.

• Georgia limited VU, the SEC’s fourth-best scoring offense (82.0 ppg coming in) to 63 points for the Commodores’ second-lowest output of the season.

• The first half was a see-saw affair with six lead changes and six ties for a halftime UGA lead of 34-33. Georgia led for 9:20, while Vandy held the lead for 6:48. The Commodores tied it twice in the second half, but Georgia led the rest of the game.

• Derek Ogbeide eclipsed the 700-rebound mark in his career and moved into the top-10 in Georgia history with 706. He past Tim Bassett (705) who passed away recently on December 9th.

“The crowd was fantastic. We had 2700 students, which is 700 over the allotment on the first night back on a Wednesday night. That’s just phenomenal, and I can’t thank them enough. And everyone else, 9400 fans, and this is the only game not sold-out. They made a difference. They were excited. There was a buzz in here, and it was great. There’s no doubt in my mind if we build a crowd this way, it will make such a difference for our team, our program, and our future. It makes such a difference in every possession right now, and we appreciate it.

“We got three stops in a row, seven times. That’s a real big barometer for winning. We track that all the time here. When you get to the end of the game, and you add up the amount of times we got three stops in a row, when you got 7 or more, it’s hard to lose. I think that played into it, we got some deflections, and we held them to one shot. Again, the crowd helped jack us up, and that was a huge part of it.”

“My teammates, and the coaching staff. I was keeping a positive vibe with the whole team. Just keeping my head in the game, let it come to me, just don’t rush it. Just giving me confidence the whole game.”

On frustration after the Tennessee loss and first half of game…

“I can say the Tennessee game, the whole team was frustrated. I was frustrated because we played bad. And the first half I think I let it linger in my head, but I just sat on the bench and just thought about it, and let it go. The second half I just came out with a positive attitude.”

On how important the game tonight was…

“It was a great win for us. I know it helped us a lot coming back home in front of our fans. I think we had like 2,700 students there supporting us, so you know that was huge. It was huge getting this first SEC win under our belt. And we will be ready to go to Auburn Saturday.”

“I just want to give credit to Coach Amir and the GA’s and the coaching staff, they did a great job with the scouting with Vanderbilt.”