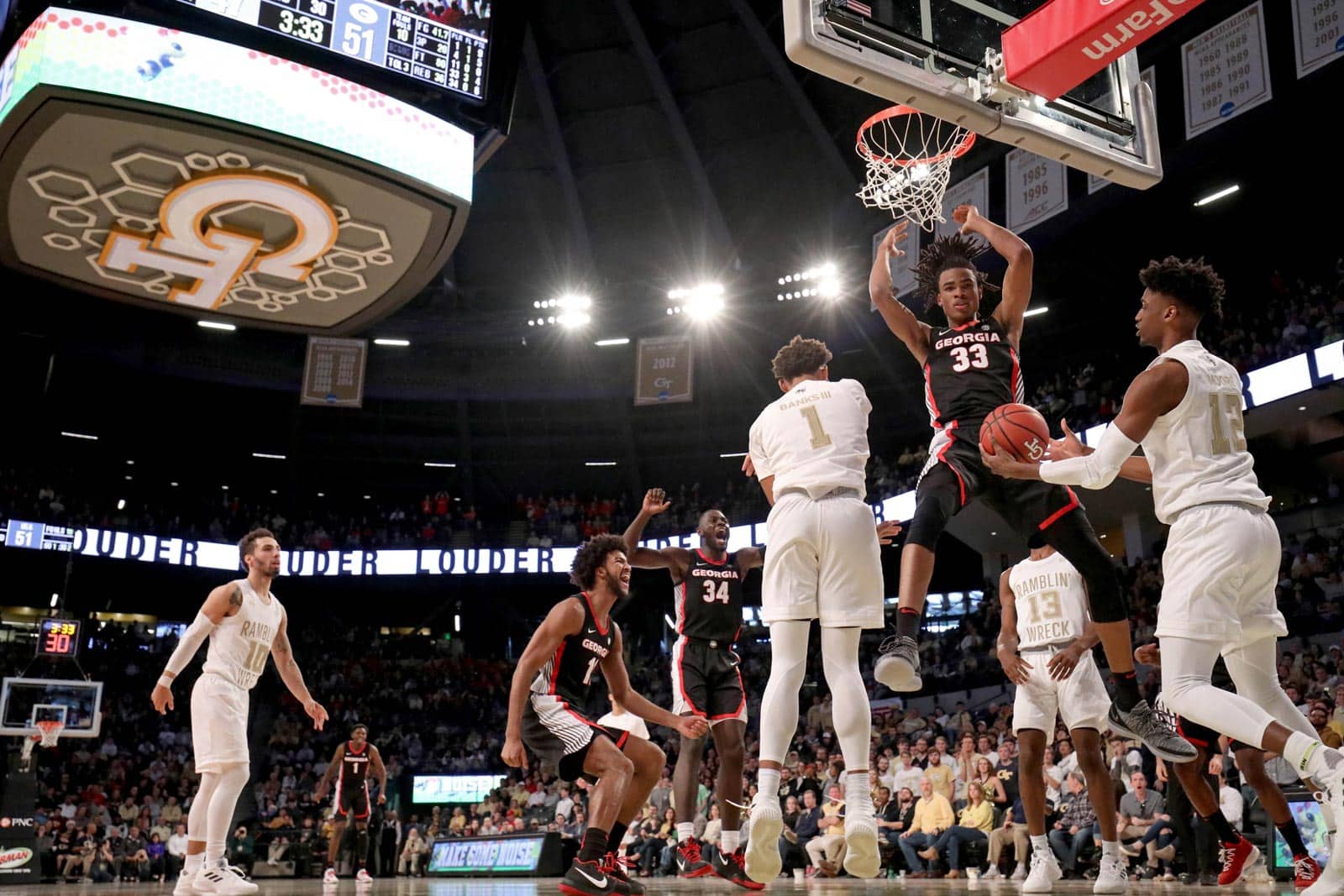 The Yellow Jackets (6-5) were threatening when they pulled the game within four at 57-53 with 1:44 remaining, however in the most opportune time junior guard Tyree Crump drained his second three of the game and senior forward Derek Ogbeide had a two-handed dunk from the baseline to thwart momentum. A three-point play by Tech put it at a six-point margin with under a minute, but Georgia (7-4) sealed the contest at the free throw line to mark the Bulldogs’ fourth consecutive win in the Clean Old-Fashioned Hate rivalry.

“It’s great to be a part of this rivalry,” Georgia head coach Tom Crean said. “We knew they were a very good team and we knew they were not going to go away. I’m proud that we never lost the lead. There were certain things we had to do. We had to create turnovers. We didn’t do a great job of that, but the most important thing was winning the rebounding game, which we did by seven. We knew it was going to be tough to score due to their zone and their pace, and they do a good job in transition defense, but we were able to figure it out and our guys did an excellent job.”

A balanced scoring headed the Georgia attack as four Bulldogs reached double digits. Sophomore Nicolas Claxton finished with a team-high 13 thanks to a dominant second half after a scoreless first half. Fellow sophomores Teshaun Hightower and Rayshaun Hammonds added 12 and 11, respectively, while Crump chipped in 10.

To get things going for the Bulldogs, Claxton poked a ball out from behind of a Yellow Jacket for a Hightower steal and at the other end Claxton found a baseline-cutting Hammonds for the game’s first points. After Claxton picked up two quick fouls, senior forward E’Torrion Wilridge checked in and contributed instantly with a converted a reverse layup 6-4 and two blocks.

Later in the half, Georgia rallied off eight straight points including two Jordan Harris layups to go up 20-9. Coming off an official’s timeout shortly after, Hightower turned a steal into a fastbreak layup and then Hammonds drained a three to make it a 13-0 run and the game’s largest lead at 25-9. The Yellow Jackets woke and narrowed their deficit to 29-19 at the half.

Seven unanswered points by Tech started the second half, closing the gap to three before Hightower stopped the streak with a three. Near the midpoint of the second half, Georgia went on a 6-0 run to send the game back up by double digits at 46-36. In the sequence, Claxton made his first bucket on the game on a put back, Wilridge made a contested layup and Harris added two free throws.

Georgia Tech fought it to a three-point margin with seven unanswered, making it 46-43 with about seven minutes left in regulation. Crump’s first three of the game upped the margin to six. After a Tech two points, Claxton responded with five. First, he soared for a big rebound and finished with a two-handed slam, and then he hit a three on a waning shot clock.

The Claxton three gave Georgia a nine-point cushion with 2:32 left. Down the stretch, Georgia responded to each GT push by outscoring the Yellow Jackets 14-12. From the line, Claxton was 4-of-4, Crump 2-of-2 to seal the win.

The Bulldogs have a seven-day break for the holidays before they hit the hardwood again, a home game versus UMass at Stegeman Coliseum. The contest is schedule for Sunday, Dec. 30th at 6 p.m. and will be aired on SEC Network.