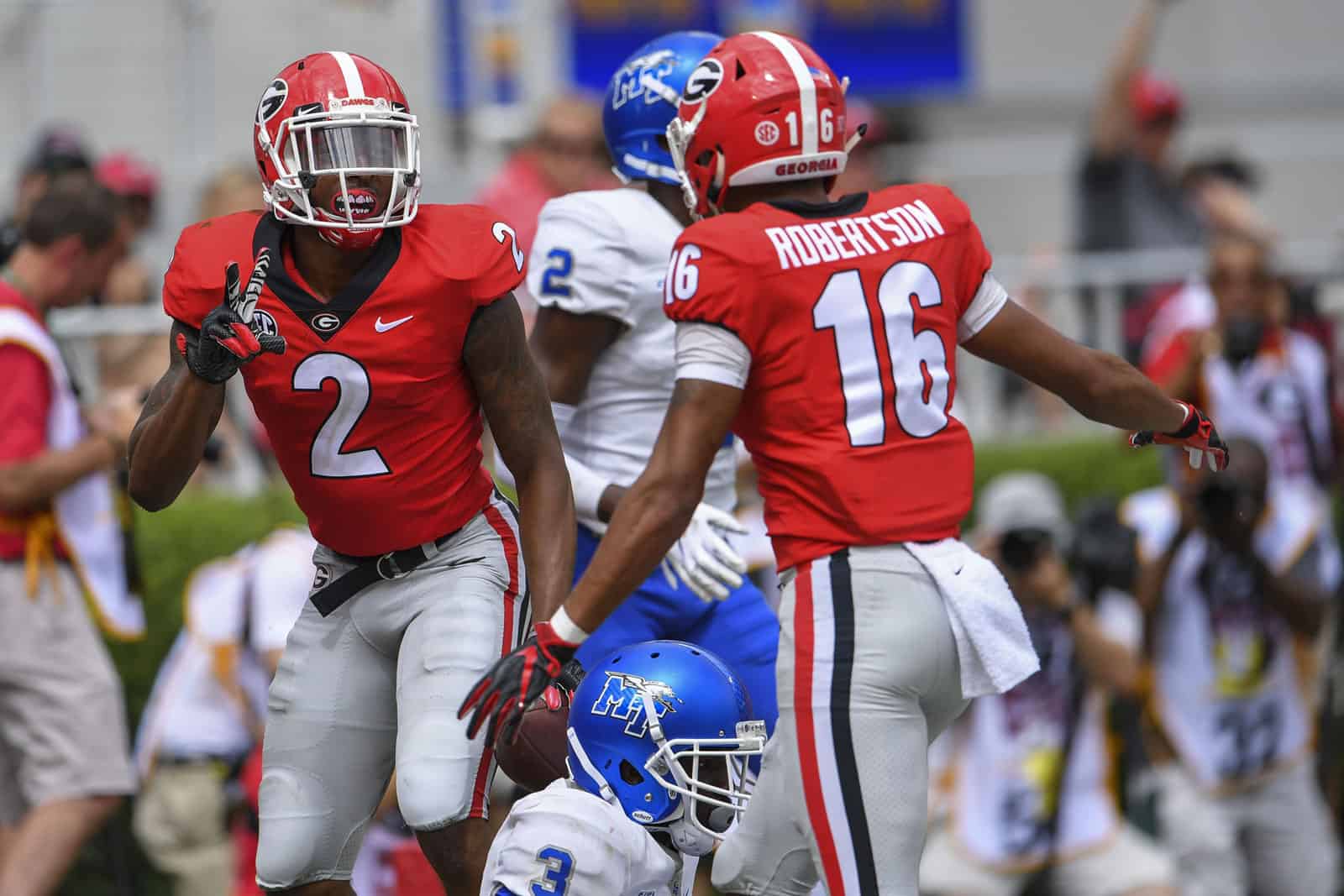 The Bulldog offense completed the contest with 484 total yards, including 382 in the first half.

Averaging 45.3 points per game this season, the Bulldogs have scored 40-plus points through three consecutive matchups.

Junior tailback Elijah Holyfield led the Bulldog run game, becoming the first Georgia running back to record a 100-yard game this season, reaching the mark in the first half.

He was joined by sophomore quarterback Jake Fromm, who threw for an efficient 10-for-12 clip with three touchdowns and 128 yards. Sophomore wide receiver Jeremiah Holloman paced the pass game with 90 yards on three catches, becoming the third different Bulldog receiver to do so in as many games.

Senior inside linebacker Juwan Taylor and sophomore inside linebacker Monty Rice led the Georgia defense with six and five tackles apiece. The Blue Raiders were held to 288 yards on 68 plays with one touchdown.

“We started off a little rough with some penalties and organizational stuff that we’ll clean up” Georgia head coach Kirby Smart said. “But I thought we came out physical and played hard. … I like the toughness we show during the week. We’ve created a standard the last couple of years, and now we’re owning it with players holding other players accountable.”

At the 6:02 mark, senior defensive back Deandre Baker stepped in front of the intended Blue Raider receiver to snag his second interception of the season, which he returned for 26 yards. The following drive featured 35 yards from junior tailback Brian Herrien on three carries, including a 21-yard rush. To cement the 14-0 lead, Fromm found Holloman in the end zone for his first career touchdown.

To usher in the second quarter, junior wide receiver Tyler Simmons broke free for a career-long 56-yard rushing touchdown, the first of his career.

At the 12:23 mark in the second frame, Stockstill connected with Brad Anderson, but an incoming Baker stripped the ball from Anderson’s hands, sending it to sophomore defensive back Richard LeCounte, who returned it for seven yards to the Georgia 29-yard line.

With 7:19 remaining in the second quarter Hardman widened the Georgia lead to 28 on a 70-yard punt return, the first since Isaiah McKenzie in 2016. The Bowman, Georgia native finished the game with 111 all-purpose yards.

Georgia allowed its first points in Sanford Stadium this season in the second quarter with a 41-yard touchdown pass from Stockstill to Patrick Smith.

With 2:14 left in the half, senior wide receiver Riley Ridley capped a 4-play, 74-yard drive with a 12-yard touchdown, sneaking in a foot at the edge of the end zone on a pass from Fromm for the 35-7 advantage.

Freshman quarterback Justin Fields sent the Bulldogs into intermission with his first rushing touchdown of his career, a 15-yard dash to the end zone. Georgia’s 42 first-half points were the highest output since Troy through the first two quarters in 2014.

With 6:33 left in the third quarter, Georgia tacked on another career-first touchdown with a nine-yard pass from Fromm to senior wide receiver Jayson Stanley in the middle of the end zone.

Up next, the Bulldogs head to Columbia, Missouri to take on the Tigers. The matchup is slated for 12 p.m.

*Lighting Up The Scoreboard: The Bulldogs topped Middle Tennessee 49-7 on Saturday, giving Georgia three consecutive wins with at least 40 points. The Bulldogs last did that when they started the 2012 season with five straight 40+ point games. Georgia tallied 45 points in the first half, marking the Bulldogs’ highest output since scoring 45 versus Troy through the first two quarters in 2014. Georgia won that contest 66-0. Through their first three wins of 2018, the Bulldogs are averaging 45.3 ppg. Georgia is now 2-0 all-time against MTSU.

*Pounding The Rock: The Bulldogs churned up 382 yards (217 rushing, 165 receiving) by halftime as they jumped out to a 42-7 lead. For the game, Georgia finished with 484 total yards (261 rushing, 223 receiving) with a performance that featured a 100-yard rusher during its latest victory.

Junior TB Elijah Holyfield had a career-long 66-yard run on the Bulldogs’ first possession to set up a touchdown three plays later. Holyfield completed the half with eight carries for a career-high 100 yards. The last back to hit the century mark was Sony Michel (181) and Nick Chubb (145) in the Rose Bowl Game win over Oklahoma last year. Today, sophomore QB Jake Fromm connected with junior receiver Mecole Hardman for a 5-yard touchdown after Holyfield’s longest run. This was Hardman’s team-leading third touchdown catch of the year. Hardman later returned a punt 70 yards for a touchdown. He last scored two different ways when he caught a touchdown pass and ran for a touchdown in the CFP National Championship Game against Alabama.

Junior WR Tyler Simmons took a handoff at the beginning of the second quarter a career long 56 yards for his first career touchdown of any kind. This capped a season-long scoring drive of 94 yards, which was six plays and lasted 2:40, and was Georgia’s longest scoring drive since the Bulldogs went 98 yards on 11 plays in 6:34 versus Auburn in 2014. Freshman QB Justin Fields led this scoring drive after Fromm played the first two series. Fields finished 6-for-8 for 71 yards and 1 TD passing and 1 TD rushing (15-yarder).

*To The House: Mecole Hardman, who led the SEC in punt returns/yards/avg. last year, returned a punt 70 yards in the second quarter for his first career PR for a touchdown. This gave the Bulldogs a 28-0 edge. Isaiah McKenzie was the last Georgia player to return a punt for a score after he went 82 yards versus UL-Lafayette in 2016. Hardman finished with 111 all-purpose yards in the game (90 PR yards, 21 receiving).

*Back To Back Picks: Senior DB Deandre Baker snagged his second interception of the year and in as many games on a 4th-and-9thsituation in the opening period. He returned it 26 yards a week after he had a 55-yard return in the win at #24 South Carolina. Baker’s seventh career pick led to a Georgia touchdown. In the second half, Baker forced a fumble that Richard LeConte scooped up and returned seven yards. Baker finished with 3 tackles, 1 FF and 1 INT.

*Firsts: Sophomore WR Jeremiah Holloman hauled in an 11-yard touchdown catch from Fromm to put Georgia up 14-0. This marked Holloman’s first career touchdown and Fromm’s second scoring pass of the half. Holloman later caught a 65-yard pass from Fromm and ended the day with a career-high three catches for 90 yards and a TD.

Justin Fields also registered his first TD run on a 15-yard rushing score near the end of the first half. Also of note, senior WR Jayson Stanley caught his first career touchdown on a 9-yard strike from Fields in the third quarter.

*Defense Flexes: Georgia held MTSU to a touchdown through the first two periods and to 169 yards on 34 plays and just six first downs. The Blue Raiders’ score came on a 41-yard receiving touchdown. MTSU was shut out in the second half and finished with 288 total yards on 68 plays. Senior ILB Juwan Taylorled the Bulldogs with six stops while sophomore LB Monty Ricehad five stops.

*Points off Turnovers: Georgia is +3 in Turnover Margin, scoring 21 points off five turnovers on the year. Opponents have forced two turnovers and turned them into no points. Deandre Baker had his second interception of the year and returned it to the MTSU 49. Five plays later, Jeremiah Holloman caught his first career touchdown. In the second half, Baker stripped an MTSU receiver and Richard LeCounter ecovered it but Georgia had to eventually punt.

*Starters: FreshmanCade Mays started at LT for his first career start. He started in place of sophomore Andrew Thomas who injured his left ankle at South Carolina last week. On defense, sophomores Mark Webb and William Poole both got their first starts at DB.