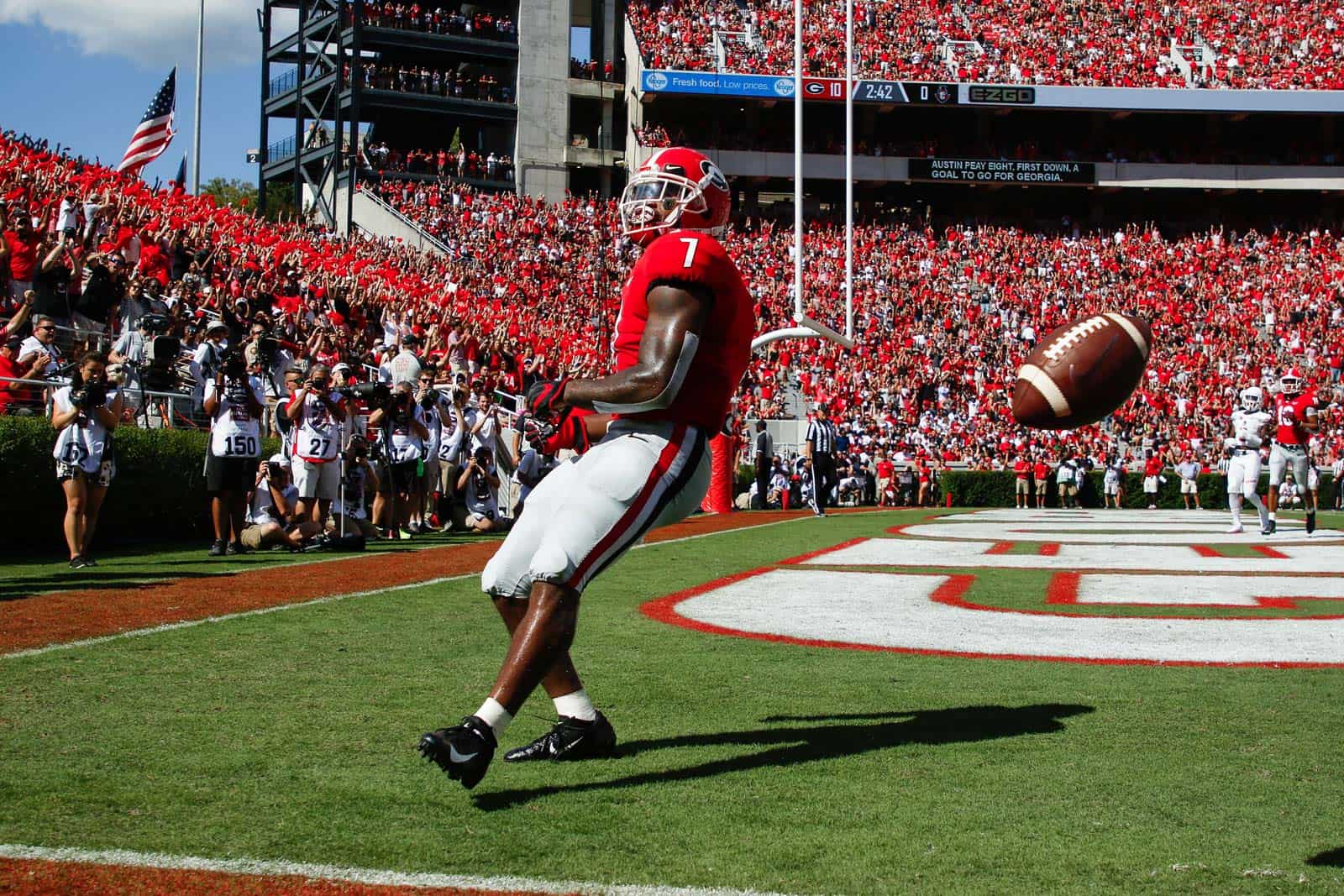 ATHENS, Ga. – A stout defensive effort coupled with an explosive Georgia offense lifted the Bulldogs to a 45-0 victory against the Austin Peay Governors in the season opener at Sanford Stadium on Saturday afternoon.

The shutout marked the first in a season opener since 2003 against Clemson, as the Bulldog defense held the Governors to 152 total yards and seven first downs on 50 plays. In the first half, Georgia limited Austin Peay to 81 yards and one trip to the Red Zone. Redshirt junior J.R. Reed led the attack with six stops.

“We’re happy to get the win,” Georgia head coach Kirby Smart said. “It was a good way to start. The kids played hard. But there are a lot of things we can improve on. We knew we couldn’t get better until we played a game. We’ll learn from this one, learn from our mistakes. We’ll get some things ironed out.”

As the Georgia defense held the Governors scoreless in the first half, every offensive possession from the Red and Black resulted in a Georgia score. The first of the 2018-19 season, a Rodrigo Blankenship 34-yard field goal capped a 10-play, 41-yard offensive drive directed by Fromm.

Following the first of many stands from the Bulldog defense, the Georgia offense conducted an 11-play, 80-yard march, featuring 46 total yards from Swift. Junior Riley Ridley claimed the first touchdown of the season and a 10-0 lead with a 10-yard connection with Fromm.

Thirty-nine seconds later, senior outside lienbacker D’Andre Walker placed the ball back into the hands of the Bulldog offense, recovering a fumble from Austin Peay quarterback Jeremiah Oatsvall. The next play, Swift ran for an 8-yard touchdown, sending Blankenship to the field to secure the extra point and the 17-0 margin.

The Bulldog debuts continued into the second quarter: Fields entered the game and placed the ball in the hands of junior wide receiver Demetris Robertson. With a pair of blocks from the tight end tandem of Isaac Nauta and Charlie Woerner, the open field presented itself for the Cal transfer, cementing his first Georgia score on a career-high 72-yard run to set up the 24-0 lead.

After a three-and-out from Austin Peay, a 9-play, 69-yard drive was finalized with a handoff to Holyfield, who eluded multiple Governor defenders on his way to the end zone with a 17-yard touchdown. Junior Mecole Hardman closed out the half for the Bulldogs, using his speed to out-run the Austin Peay secondary to a 38-0 advantage with the help of a Blankenship extra point.

In the second half, a 36-yard run from Cook positioned the Bulldogs in Austin Peay territory, set up for a Fields-Nauta 12-yard touchdown. Blankenship sealed the final at 45-0.

The Bulldogs head to Columbia, South Carolina for a week-two matchup with the Gamecocks. Georgia’s Southeastern Conference opener is slated for 3:30 p.m. ET on CBS.

*Pouring On The Points: The Bulldogs scored 38 points in the opening half and won the contest versus Austin Peay 45-0. It was the first season-opening shutout since 2003 when the Bulldogs blanked Clemson 30-0 on the road. Today marked the 42ndtime in school history that Georgia opened a season winning via a shutout. Georgia’s 45-point win in a season opener was the best since 2010 when it beat University of Louisiana Lafayette by 48, posting a 55-7 decision.

Sophomore Jake Fromm, freshman Justin Fieldsand freshman Matthew Downing spread the ball to 11 different receivers from their QB spot. Fromm connected with junior WR Riley Ridleyand junior WR Mecole Hardmanfor touchdowns, including his 59-yard strike to Hardman late in the second quarter, and finished 12-for-16 for 157 yards and two touchdowns. Fields made his debut and finished 7-for-8 for 63 yards and a touchdown and added three carries for 33 yards. Downing was 2-for-3 for four yards.

Preseason All-American PK Rodrigo Blankenshipbooted a 34-yard field goal at the 10:42 mark in the first period to put the Bulldogs up 3-0. Also of note, freshman P Jake Camardawas the holder on Blankenship’s field goal and extra points and senior Nick Moorewas the snapper.

*Getting Defensive: The Bulldog defense posted a shutout, limiting Austin Peay to 152 total yards (91 rushing, 61 passing) on 50 plays. Before today, Georgia’s last shutout came on Sept. 30, 2017 when it beat Tennessee 41-0 in Knoxville. In the first half today, the Govs tallied 81 yards and just four first downs. Georgia last held an opponent scoreless through two quarters was in the College Football Playoff National Championship Game versus Alabama. The Bulldogs accomplished the feat four times last year. The 38-0 advantage at the end of the first half was Georgia’s biggest lead through two quarters since taking a 45-0 lead over Troy in 2014.

The Governors reached the Red Zone once in the first half Saturday, advancing to the Georgia 20 yard line. On that possession, APSU PK Logan Birchfield missed a 37-yard field goal to end the drive. Junior S J.R. Reed led the Bulldogs with six stops.

*First = Career Long: On redshirt sophomore TB Demetris Robertson’s first career carry (and only one of the day) for the Bulldogs, he took it a career-long 72 yards for a touchdown to make it 24-0 with 10:29 left in the first half. A Savannah, Ga., native, Robertson transferred to UGA from California during the offseason. This was the longest rush for the Bulldogs since Sony Michel went 75 yards versus Oklahoma in the Rose Bowl Game victory last season. Robertson’s previous career long was 34 yards versus Weber State in 2017.

*New Look At TB: Sophomore TB D’Andre Swifthad eight carries for 43 yards and a touchdown. He also caught a career-high four passes for 33 yards. Junior TB Brian Herrienhad his first career kickoff return, a 24 yarder in the opening frame. Herrien had a career high three catches for a career-high 20 yards. Georgia’s third option at running back, junior TB Elijah Holyfield, completed the game with five carries for 24 yards and his third career touchdown on a 17-yard scamper. FreshmanJames Cooktallied 66 yards on six carries.

*Turnovers: Georgia is even on turnover margin. Governors’ QB Jeremiah Oatsvall lost the ball and D’Andre Walkerrecovered it on the APSU 8 yard line. Swift scored on the next play. The Governors jumped on an errant snap in the third quarter to their one fumble return.