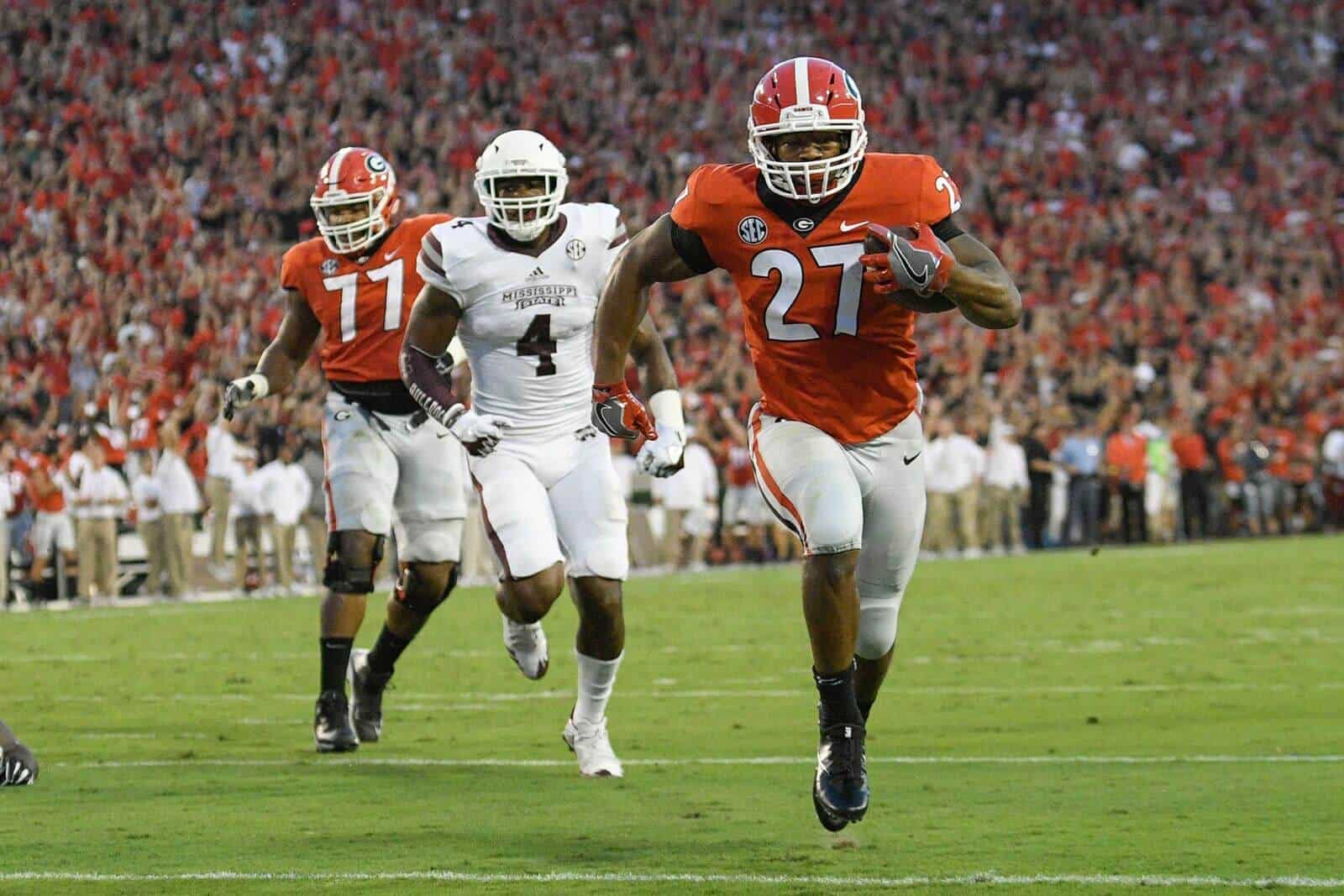 ATHENS, Ga. – The 11th-ranked Georgia Bulldogs were impressive in nearly every phase of the game Saturday evening as they took down No. 17 Mississippi State, 31-3, in front of a capacity crowd of 92,746 at Sanford Stadium.

The Bulldogs from Athens improve to 4-0 overall and 1-0 in Southeastern Conference action this season, while Mississippi State picked up its first loss of 2017 to fall to 3-1 overall and 1-1 in league play. In an all-around sound performance, Georgia out gained Mississippi State yardage wise by a 404 to 280 total. MSU came into Saturday’s contest averaging an SEC-best 47.7 points and 493 yards per game.

Georgia freshman quarterback Jake Fromm hit 9-of-12 passes for 201 yards and two touchdowns, while a balanced rushing attack featured a quartet of Bulldogs that included Nick Chubb with 81 yards, D’Andre Swift with 69, Sony Michel with 32 and Brian Herrien with 21.

It took just 10 seconds for Georgia to get on the board on its first offensive possession. On a flea-flicker play, Chubb tossed the ball back to Fromm, who found Terry Godwin open down the middle for a 59-yard score.

On the next offensive possession, Georgia put the ball in the end zone once again — this time Chubb ran it in from 7-yards out to cap off an 8-play, 78-yard drive. The Bulldogs from Starkville added a field goal in the second quarter and the two teams went to the half with Georgia leading 14-3.

The second half started much like the first for the SEC East Bulldogs. This time, Chubb took a direct snap 28 yards on UGA’s first possession to give the home team a 21-3 lead.

As was the case most all night, Georgia’s defense came up with a big play as Baker picked off a Nick Fitzgerald pass to set the Bulldogs up in Mississippi State territory. Georgia converted on a 3rd-and-1 as Fromm hit sophomore tight end Isaac Nauta across the middle on a play action pass.

Not to be outdone, Baker’s teammate Sanders picked off a pass on MSU’s next possession to set up a 49-yard field goal by Blankenship. The Marietta, Georgia native connected from that distance to give Georgia the final 31-3 advantage.

“We finally had a couple of turnovers,” Smart added. “It’s been a long time coming. I can’t say enough about our defensive staff. They have worked really hard with the defensive group.”

Next up, Georgia heads to Knoxville, Tennessee to take on the Volunteers in a nationally-televised game on CBS at 3:30 p.m. ET this coming Saturday.

*Defense Stellar Versus MSU: No. 17 MSU came into the game averaging 47.7 points/game (No. 1 in SEC/No. 9 nationally) and 493 yards/game and tonight was held to just 3 points and 280 yards of total offense, the first time in the Dan Mullen era they’ve been held under 300 yards.  In the first half, Georgia limited MSU to only 133 yards and a field goal. Also, the game ended with a stop by the UGA defense at the 2. Redshirt sophomore DB J.R. Reed led the Bulldogs with a career-high 10 stops while junior ILB Roquan Smith had eight stops.

Junior DB Deandre Baker snagged the Bulldogs’ first interception of the year and the third of his career late in the third quarter.  His pick led to Georgia’s fourth touchdown of the game to put UGA up 28-3.  Senior S Dominick Sanders went airborne to catch his first interception of the year after J.R. Reed tipped a pass on MSU’s next possession.  Sanders now has 13 interceptions in his career, tying him for the top spot on the NCAA active list and with head coach Kirby Smart and three others for fifth in the school record books.  Sanders returned the pick 15 yards.  He now stands No. 2 on the school’s all-time list with 311 return yards behind Hall of Famer Jake Scott (315).

*Series History: For the first time in the series, both teams entered the game ranked in the top 25, and it was No. 11 Georgia with a 31-3 victory over #17 MSU.  Georgia leads the all-time series 18-6 including 10 in a row in Athens. Tonight marked the biggest margin of victory over MSU since a 47-0 shutout here in 1997.

*QUICK Strike: Freshman QB Jake Fromm connected with junior WR Terry Godwin for a 59-yard touchdown on the Bulldogs’ first play from the line of scrimmage and Georgia never looked back.  The pass came after Fromm handed off to senior TB Nick Chubb and he tossed it back to Fromm.  This was a career long for both Fromm and Godwin.  This was the first time the Bulldogs scored on the game’s opening play since current Denver Bronco Isaiah McKenzie took a handoff 55 yards for a score in 2016 against Louisiana.  The last time Georgia scored on a passing play on the first snap was in 2014 when Hutson Mason hit current Kansas City Chief Chris Conley for a 35-yard strike versus Charleston Southern in 2014.  The Bulldogs won both of those aforementioned contests (35-21 and 55-9, respectively).

Godwin finished with two catches for 80 yards. Fromm completed the first two quarters a perfect 8-for-8 for 160 yards and a touchdown and finished the game 9-for-12 for a career high 201 yards and 2 TDs.  He threw his first incomplete pass on his first attempt of the third quarter.

*Ground & Air Combo Makes It 14-0: On the UGA’s second series, a trio of Bulldog backs ran for 41 yards, including Nick Chubb’s 7-yard scoring scamper to put Georgia up 14-0 at the 6:16 mark in the first period.   Overall, The Bulldogs stayed perfect in the Red Zone this season, scoring all 13 times.  However, Fromm mixed in a 16-yard strike to senior WR Javon Wims and a 21-yard pass to Godwin (on a 3rd-and-5 situation) on the drive. Chubb took a direct snap on a 3rd-and-1 situation during Georgia’s first possession of the third quarter and ran 28 yards for his second touchdown of the game.  Chubb now has 39 career touchdowns, which is third in UGA history, and is fourth with 35 career rushing touchdowns.  Chubb finished the game with 15 carries for 81 yards and two scores.

*Kicking Continues: The Bulldogs have benefitted from their kickoffs and punts through four games this season.  On Saturday night, redshirt sophomore PK Rodrigo Blankenship extended his streak to 14 straight touchbacks on kickoffs dating back to his final kick of the Notre Dame victory.  Opponents have just 99 kickoff return yards on five returns through a total of 22 kickoffs this season.  In addition to four extra points, Blankenship also matched his longest field goal with a 49 yarder at the end of the third quarter to put Georgia up 31-3. Graduate transfer P Cameron Nizialek launched his first punt 46 yards and with the help of Sony Michel and Mecole Hardman’s coverage, MSU called for a fair catch at its own 10-yard line.  Nizialek had a 44-yard punt on his second try and MSU fair caught that one as well at its 40-yard line.  He had a game-long punt of 53 yards in the fourth quarter and MSU called for a fair catch.  Opponents still have just four returns for -4 yards in 2017.

*Back In Action: Senior DB Malkom Parrish saw his first action of the season for the Bulldog defense.  He sustained a foot injury before Georgia’s opener.  Senior TB Sony Michel, who sat out the Samford game with an ankle injury, also returned.

*Turnovers: Georgia is -1 in Turnover Margin this season.  Opponents have forced six turnovers and turned them into 17 points while the Bulldogs have forced five turnovers and registered 14 points.  Freshman TB D’Andre Swift caught Fromm’s seventh consecutive completion to start the game and then fumbled.  MSU failed to score in its next series and punted to the Bulldogs.  Deandre Baker picked off the third pass of his career (first for the Bulldogs this season) late in the third quarter.  Georgia scored a touchdown on the next series.  On MSU’s next series, J.R. Reed tipped a pass that Dominick Sanders caught for an interception.  Rodrigo Blankenship sent a 49-yard field goal through on Georgia’s next possession, matching his career long.

On the first offensive play of the game:
“I had gone to Jim (Chaney) and told him I’d like to open with that and he said they had been talking about the same thing. We felt like there would be some players peeking in the backfield, and Terry (Godwin) got behind them.”

On the defense:
“We finally had a couple of turnovers. It’s been a long time coming. I can’t say enough about our defensive staff. They have worked really hard with the defensive group.”

On Jake Fromm:
“The kid is stepping up. He’s starting to play. He’s always had that in him. He’s a good leader. He did a good job managing the game.”

On Tennessee:
“Humility is a week away. Whether we’d won or lost this one, we’d have to refocus and concentrate and get ready to do it again.”

On the fans:
“The crowd was electric. The students were awesome. They were there in pregame warm-ups and that was really good to see. We need to keep doing that.”

On recording the team’s first interception of the season and the third of his career…
“It felt good. It came from a good rush from the D-line and the linebackers dropping in their zones, so [MSU quarterback Nick Fitzgerald] had to put a little bit of air on it. I thank those guys… We knew it was coming eventually.”

On Dominick Sanders’ 13th career interception — which tied the school record and the record among active FBS players — which came right after…
“We have a saying in the defensive back room that “turnovers come in bunches”. So I knew it would eventually come sooner or later.”

On the early 14-0 lead surmounted by the Georgia offense…
“That was big. That gave the defense a little cushion, but we don’t really worry about the offense. We want to make sure that we stay focused and worry about our defensive assignment.”

On the confidence level among the defense after the win…
“It’s the same that it was last week, just with how we practiced. We practiced physical every day, full padded-up. You saw the results of it. The team right now… in this league you’ve gotta be ready every week. We can’t be too high on this win, because we’ve got to go to a tough environment next week and play some football.”

On what this win means for the program…
“It’s a great win. Every win is great, but we’ve got to enjoy it for tonight and prepare for next week.”

On playing at Tennessee for the first time since a season-ending knee injury in 2015…
“Yeah, I’m ready for it… It’s a blessing. Last time I went up there, all that happened. It’s a blessing for me to go up there and be able to run like I always have been. I’m looking forward to it.”

On achieving offensive balance with 201 yards passing and 203 yards rushing…
“[Balance] is pretty much always the game plan. We take what they give. I thought we did a great job with that. We just look forward to carrying it on.”