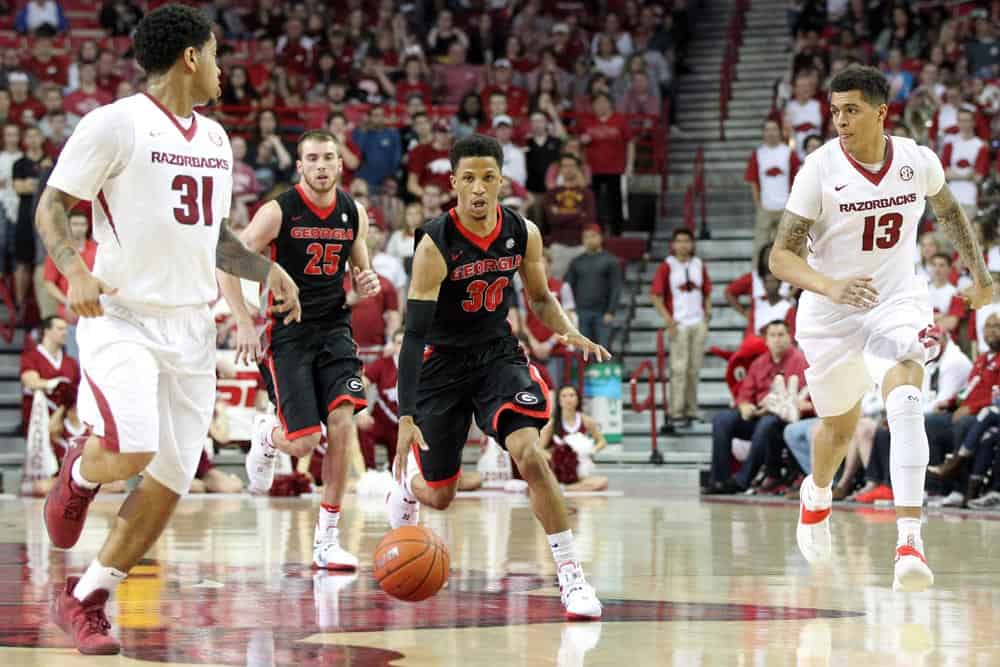 FAYETTEVILLE, Ark. – Despite a fifth-straight game from J.J. Frazier with at least 20 points, the Georgia Bulldogs fell 85-67 to Arkansas Saturday afternoon at Bud Walton Arena.

Frazier, who led Georgia (18-13, 9-9 SEC) with 24 points, knocked down all 13 of his free throw attempts on the day and grabbed four rebounds. Derek Ogbeide added 12 points and seven rebounds for the Bulldogs. Moses Kingsley scored 15 points and hauled in nine rebounds to lead the Razorbacks (23-8, 12-6).

“We started the second half poorly,” Georgia head coach Mark Fox said. “We had four fouls within the first two minutes of the half and just didn’t start the second half well. They took that momentum and ran with it. We just didn’t defend and rebound today anywhere near to a level that would allow us to win against a top-50 team on the road. This is the first time that we could not find a lineup that could not score and get stops. We just couldn’t find that formula today. We are obviously very banged up, and this is the first time I thought it really got to us. Give Arkansas credit. They have a team that coming in we felt like was a lock for the NCAA Tournament. We just couldn’t find the group today that could get stops, and that really cost us, especially in the second half.”

Only one player in the SEC has attempted more free throws than Frazier’s 13 in a game without a miss this season – Arkansas’s Daryl Macon, who went 14-of-14 against Texas earlier in the year. In today’s game, the Razorbacks knocked down 15 more shots than Georgia on the same number of attempts and edged the Bulldogs 38-33 in the rebounding department.

Georgia used a balanced scoring attack in the first half to stay within one point at the break. Frazier (11 points) and Ogbeide (10) were both in double-figures after the first 20 minutes, while Juwan Parker contributed six points and seven rebounds. The Bulldogs won the rebounding battle by four in the first period, including eight offensive boards that led to 11 second-chance points.

The biggest lead of the half by either team was seven, when a 7-0 run by the Bulldogs put them ahead 21-14 with about nine minutes to go in the opening period. Once the Razorbacks tied it back up at 25, the game was a back-and-forth affair until the halftime buzzer. Two Arkansas free throws with 7.6 seconds to go before the break put the Razorbacks ahead by three, but Frazier took the ball off of the ensuing inbounds pass the length of the court and got fouled at the bucket. He knocked down a pair of shots from the charity stripe himself to make the score 38-37 going into halftime.

A 15-4 run from Arkansas opened the second half put the Bulldogs behind by 12. Frazier finished the latter part of a three-point play right after the first media timeout to get the deficit back to single-digits, but picked up his fourth foul just 17 seconds later. Over the next two minutes and 48 seconds without him on the floor, the Bulldogs scored just two points and were forced to call a timeout as the Arkansas lead ballooned to 14.

Out of the timeout, Mike Edwards scored five of Georgia’s next seven points and scored seven of his nine total in the second period. Following a 1-of-2 trip to the line from Edwards, the Bulldogs missed their next six shots and found themselves down 73-53 with less than seven minutes to go. Frazier made four-consecutive free throws to cut the deficit to 16 and drew a Razorback offensive foul on the next possession. The teams traded buckets on the next few trips but Arkansas was able to get its lead back up to 19 with under four minutes to go, and sealed the win down the stretch.

Georgia will be back in action Thursday at the SEC Tournament in Nashville, Tenn. Its seed and opponent will be determined at the conclusion of today’s games around the conference, but the Bulldogs are guaranteed to receive a first-round bye in the tournament.