Bulldogs clipped by Gators 80-76 in OT

Bulldogs clipped by Gators 80-76 in OT 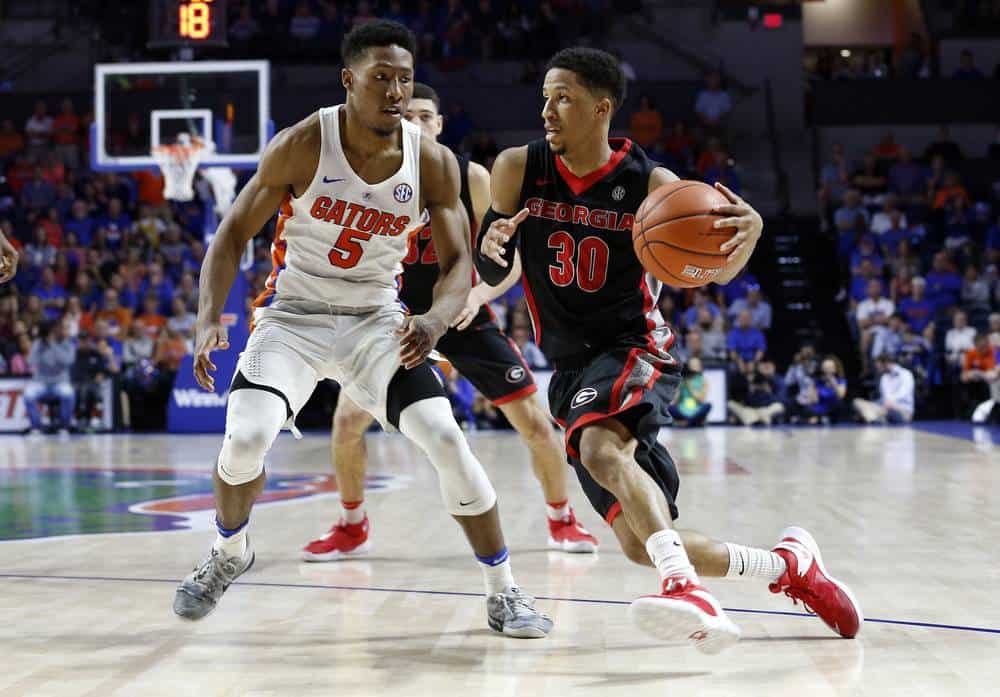 GAINESVILLE, Fla. – The Georgia Bulldogs (11-6, 3-2) fell 80-76 to the Florida Gators (14-3, 5-0) in a back-and-forth game that spilled into overtime Saturday afternoon at the Exactech Arena in the Stephen C. O’Connell Center in Gainesville.

“This was a very hard-fought game,” Georgia head coach Mark Fox said. “One of which I was pleased with how we played and executed. You are never going to be able to play a perfect game. We had some costly mistakes, defensive mistakes, that really hurt us but those things are going to happen to a degree during the game. Our kids really competed and at the end of the night we held them to 40 percent shooting while we shot nearly 50 percent. We won the rebound battle by nine but we were minus 11 free throws and minus 14 attempts to them so that balance was hard for us to overcome as a team.”

In overtime, Florida took the early advantage with two free throws but Georgia senior guard J.J. Frazier responded with a three-pointer to take the lead at 70-69. The lead would be the last for the Bulldogs as they were unable to gain the upper hand down the stretch.

Frazier led Georgia in scoring with 25 points to go along with a team best five assists and four steals. Redshirt junior guard Juwan Parker chipped in 17 points and seven rebounds. Junior forward Yante Maten contributed 15 points but fouled out with a few minutes left in regulation.

The Bulldogs jumped out to an early 8-2 lead to start the game and held onto the advantage going into halftime at 33-32. Frazier led the Bulldogs with 10 points while Parker followed with eight points. Georgia shot 46 percent from the floor in the first half and held Florida to 38 percent shooting but the Gators were 5-of-9 from 3-point range.

With just less than five minutes remaining in the game, Frazier intercepted a Gator pass and converted it into a breakaway layup to give Georgia a five-point advantage at 64-59. The Gators regained the lead, 65-64, on a runner in the lane by Canyon Barry at the 2:18 mark but Frazier notched it up at 65-all moments later. Harris made a left-handed hook to push Georgia in front again with 1:09 left in the game. Florida’s Kasey Hill went to the line with 24 seconds remaining and made one of two but the Gators grabbed the offensive rebound. In the closing seconds, Hill again drew a foul and made only one free throw, but this time it tied the game at 67-all and sent the game it into overtime.

The Bulldogs outrebounded the Gators 41-32 and shot 48 percent from the field compared to Florida’s 40 percent shooting. The Gators hit nine 3-pointers in the game and were 27-of-35 from the foul line. Georgia was just 4-of-16 from long distance and shot 16-for-21 at the free throw line.

Georgia returns home to take on the Vanderbilt Commodores Tuesday at Stegeman Coliseum. The tipoff is scheduled for 9 p.m. ET and will be aired on ESPNU.