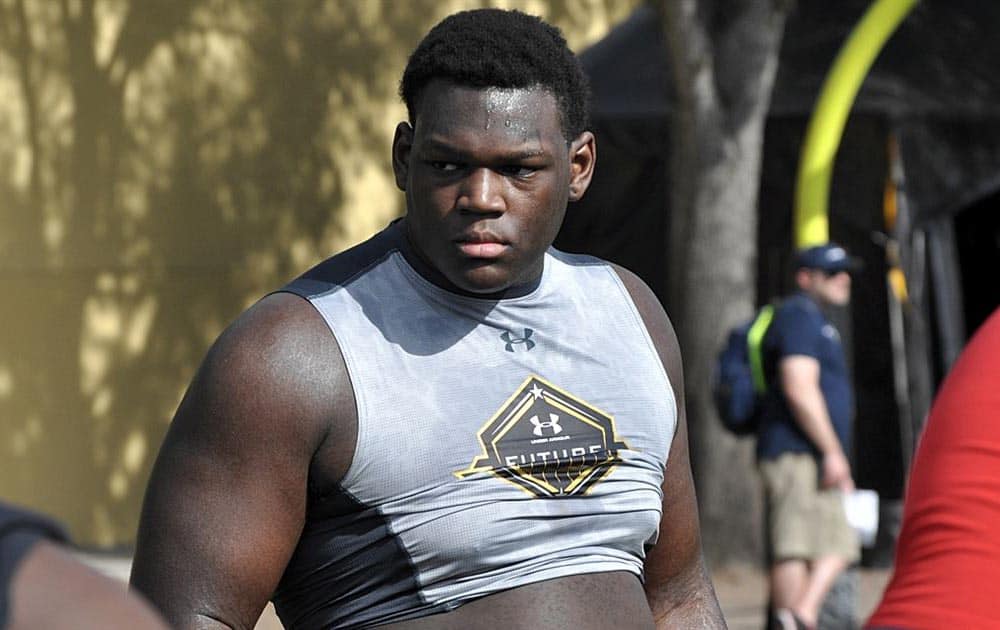 A day after learning that Nick Chubb, Sony Michel, Davin Bellamy, and Lorenzo Carter will all return for 2017, the Bulldogs picked up a massive commitment from five-star offensive tackle Isaiah Wilson.

Wilson, who is himself massive at 6-foot-7, 350 pounds, announced his commitment Friday just before noon at a ceremony at his school, Poly Prep, in Brooklyn, New York.

Dressed as an elf, Wilson received a package from Santa and opened it to reveal a UGA hat.

Isaiah Wilson committed to the Bulldogs over Michigan and Alabama. He also held offers from most of the other top schools in the country, including Auburn, Clemson, Florida, Florida State, LSU, Miami, Ohio State, Penn State, USC, and Wisconsin.

In the 247Sports Composite, Isaiah Wilson is listed as a five-star recruit, the No. 7 offensive tackle, and the No. 32 overall recruit for 2017.

Rivals.com also rates Wilson as a five-star recruit, the 2nd-ranked offensive tackle, and the No. 6 overall recruit in the country.

My BIG dawg is joining the family! Another #Savage added to #SicEm17 pic.twitter.com/M9iINIihgR

HOW BOUT THAT @CoachSamPittman WOW bro! What we going to do with all these FREAKS? #NuthinbutaGThang#SicEm17

I just watched the best Christmas program ever!!! #GoDawgs #Sicem17