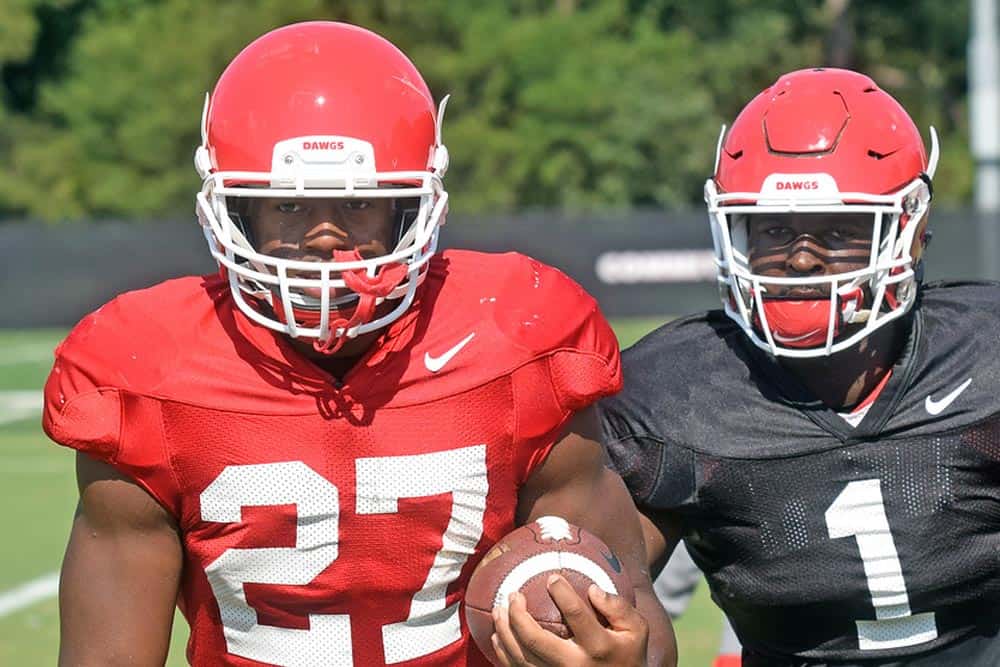 Georgia Bulldog nation got some huge news on Thursday when running backs Nick Chubb and Sony Michel both announced that they will return for their senior seasons.

Chubb also rushed for seven touchdowns and caught five passes for 86 yards and one touchdown.

Sony Michel was second on the team with 753 yards rushing on 137 attempts (5.5 YPC) and three touchdowns. Michel also had 20 receptions for 110 yards.

In addition to Chubb and Michel, which was certainly a huge surprise, linebackers Davin Bellamy and Lorenzo Carter also announced they are staying with the Bulldogs for their senior seasons.

Davin Bellamy started 11 games and played in all 12 this season. He recorded 24 solo tackles, 25 assisted tackles, and four sacks for 21 yards lost.

Lorenzo Carter also played in all 12 games, starting in eight. He recorded 37 total tackles (17 solo, 20 assisted) and had four sacks for 30 yards lost.

“I’m excited about the future of the Georgia Bulldog program, this means a lot to me and for our program that they all made this decision,” said Smart.

All four returning players will definitely provided a boost to a Georgia team that slumbered to a 7-5 finish, but one that will potentially have a Top 5 recruiting class arriving in the Fall.

All four Bulldogs thanked their families, their parents along with God and the support staff of the University of Georgia when they commented on their decision. Michel said he was excited to come back as the Bulldogs are a young team, and he’s looking forward to his senior year. Carter said he sees big things happing for the Bulldogs going forward, and he wants to be a part of it. Bellamy said being at UGA is a blessing, and he started thinking about coming back after how his last game at Sanford Stadium turned out. He wants to come back and be a leader and help the young defense. Chubb said this season didn’t turn out the way he wanted, and the brotherhood on the team is something he wants to be a part of for another year and didn’t want to pass up his senior year.

“I’m beyond excited about coming back; we want to build it up to where it should be,” Chubb added.