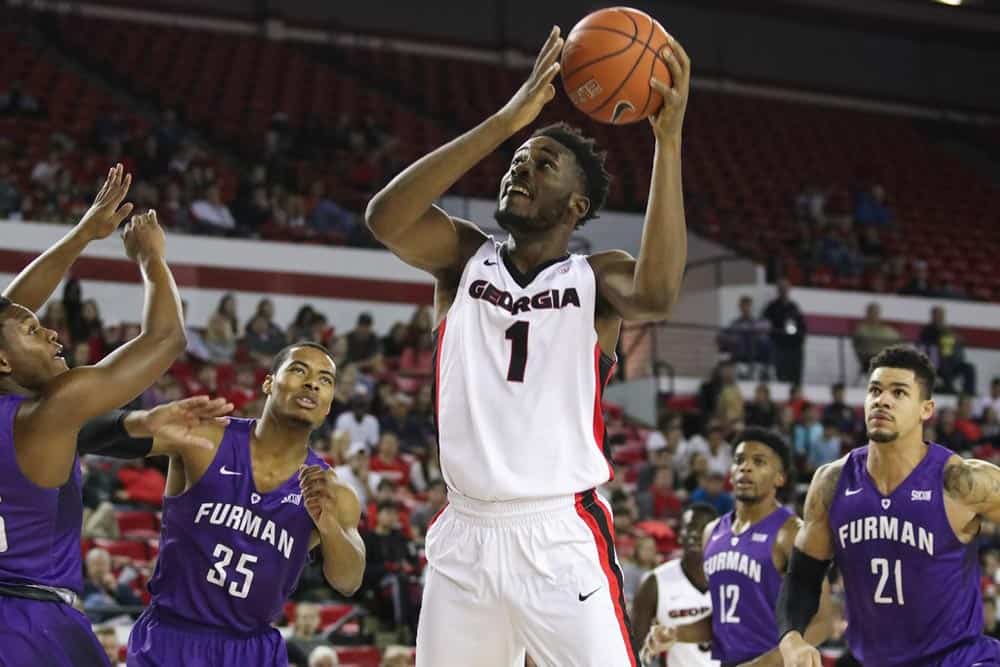 The Georgia duo combined for 55 points as Frazier poured in 28 and Maten amassed 27, both season-high marks. In the final seven minutes in a one-point game, Maten sank 6-of-6 from the free-throw line and Frazier added nine points, seven of which came from the charity strike.

“That was a hard fought game,” said Georgia Head Coach Mark Fox. “We were very concerned about how we could defend. I haven’t been pleased with our defense… Furman has an excellent offensive team, and we were concerned about our ability to guard them coming into the game. I don’t think we did a great job, but you have to give them credit, too. They have a nice basketball team, they’re going to win a lot of games, and they’re very well coached. We had a lot of guys chip in — our two big guns (Yante Maten and J.J. Frazier) showed up like they should — but we had a lot of other guys chip in, which was good to see.”

Furman (50.0-percent) and Georgia (52.8-percent) shot a similar clip from the floor the entire game. The Bulldogs outrebounded the Paladins 32-23 and had 12 fast break points compared to Furman’s two.

At the break, the Bulldogs held the advantage at 36-31, although Furman guard John Davis III hit a buzzer-beating trey heading into halftime to narrow Georgia’s lead from eight to five.

Maten, of Pontiac, Mich., had Georgia’s first six points and finished the half with 15 points while also grabbing four rebounds. Frazier, of Glennville, Ga., tallied 12 points including three shots from behind the 3-point arc, two of which came within 27 seconds of each other.

The second half proved to be more of a seesaw affair as the Paladins obtained their first lead and the game featured six lead changes. Frazier and Maten immediately continued their onslaught in the opening possessions of the second half as Frazier drained a three-pointer and Maten added a jumper.

The Paladins’ first lead occurred at the 12:13 mark of the second half, however Frazier regained the lead at 50-49 a minute later with an old-fashioned three-point play as he got fouled on a layup and made the free throw.

Furman’s Kris Acox hit two free throws at the 8:07 mark to pull the Paladins back on top 56-55. Georgia recaptured the lead on the next possession on a Derek Ogbeide tip-in, but Acox answered with a jumper.

In the subsequent possession, Juwan Parker found Mike Edwards in the lane for a two-handed slam to recapture the Bulldogs lead, 59-58, which they would not relinquish.

Minutes later, Parker hit a shot of the glass, freshman guard Jordan Harris stole the ball from Furman on the other end and Parker poured-in another jumper to stretch Georgia’s lead to seven with four minutes remaining.

The Paladins continued to fight back but the Georgia offense went blow for blow, none more crushing then when Frazier jumped on a loose ball, dished it to Parker who quickly assisted to Edwards for an emphatic tomahawk slam to strengthen the Bulldogs’ lead to 10 points with only two and a half minutes remaining.

• After hitting three 3-pointers in his first 61 games as a Bulldog, Maten has now sunk nine in his last eight contests, spanning back to last season.

• A Furman 3-pointer at 13:45 put the Bulldogs behind in the second half for the first time the contest. Georgia responded with an 8-1 run that spanned 4:51. When Furman regained the lead at 8:01, the Bulldogs countered with an 11-3 run over the next four minutes to regain control of the game.

• The contest represented the first time Georgia had a pair of 20-point scorers this season. Georgia accomplished that feat eight times in 2015-16.

On defending Furman…
“We wanted to defend the three. To be honest with you, we did a good job defending the three-point line until the last two minutes. I was very disappointed with how we finished the game, but they’re a great three-point shooting team and that was certainly something that we wanted to do.”

On the guys that chipped in…
“Well, Juwan [Parker] made some big plays, Derek Ogbeide had a big time offensive rebound and basket, Mike Edwards was huge for us on the defensive end, and Jordan Harris came in and made some big plays. Our third scorer and fourth scorer is going to be by-committee for a while. But Juwan made some key baskets at a really critical time.”

On finding the third scorer…
“I think thats really important, and I think we will get that from a lot of people. Tonight it was peppered everywhere, the scoring was.”

On defending the three…
“I mean, its defintely tough. Its a mismatch when they bring four guards out there and the big men have to guard different players. Towards the end, Mike [Edwards] definitely helped us with his versatility, taking my man and I was able to take his big man. But it definitely is an advantage for them.”