Georgia-South Carolina to be played on Sunday afternoon

Georgia-South Carolina to be played on Sunday afternoon 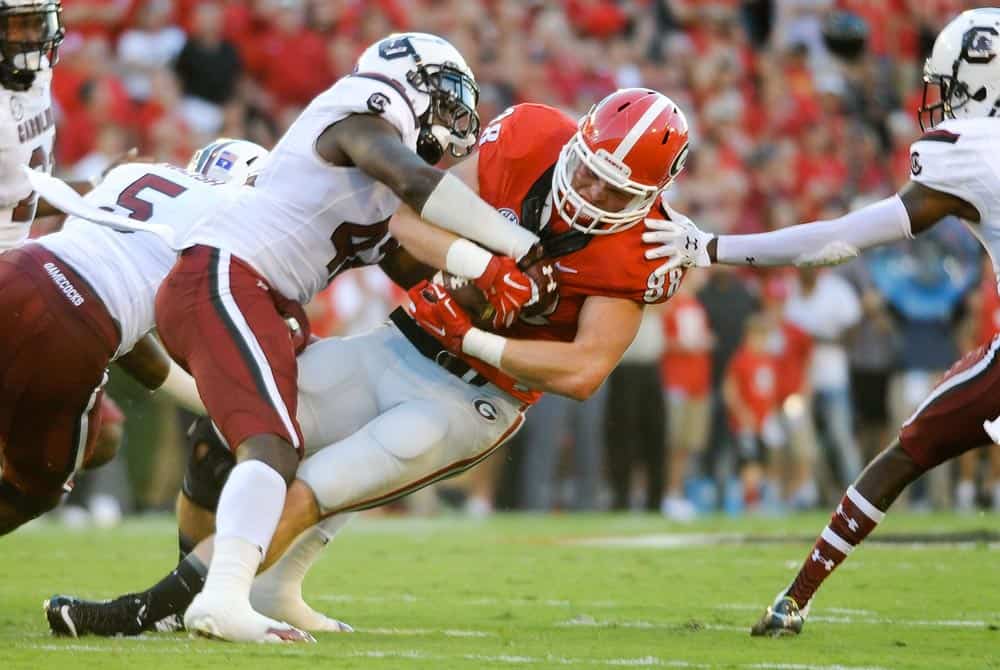 After a long wait, a timetable for kickoff has finally been announced for Georgia’s game at South Carolina.

The two SEC East rivals will play on Sunday instead of the scheduled time of 7:30pm on Saturday, South Carolina head coach Will Muschamp stated in his presser via David Cloninger of The State. The game is being moved due to concerns surrounding Hurricane Matthew.

Muschamp’s announcement comes hours after SEC commissioner Greg Sankey opted to postpone the game between Florida and LSU, after discussions with both universities. At the time, it seemed as if the Georgia-South Carolina game would follow the same pattern, but the festivities will continue on nearly as planned.

The SEC has announced that the game will kickoff at 2:30p.m. on October 9, and will be televised on the SEC Network.

Muschamp reacted to the decision to move the game shortly thereafter in a meeting with reporters, via The State.

“For (university president Harris) Pastides and (athletic director Ray) Tanner, it’s all about the safety of our student-athletes and being sensitive with a very catastrophic situation,” Muschamp said. “They did everything, as I had nothing to do with it except for the game plan. I just told them to let me know what we’re going to do, and coach Tanner just gave me the call tonight during the (radio show).

SEC commissioner Greg Sankey released a statement on the decision to move the game, indicating that is of the best interest for all parties involved if the game is postponed a mere 17 hours.

“Due to the potential impact of the hurricane on Columbia and the surrounding area, it is in the best interest of safety to play the game on Sunday rather than Saturday night,” SEC Commissioner Greg Sankey said.  “I appreciate the cooperation of the schools who worked closely to make the appropriate operational adjustments in order to accommodate this change in the schedule.”

Luckily for all involved, Hurricane Matthew is expected to be well past the South Carolina coast by the newly scheduled kickoff time, and the forecast in Columbia calls for sunny skies and a high of 77 degrees on Sunday.

The primary concern with playing the game at Williams-Brice Stadium, aside from the obvious weather conditions, was the inability for the state of South Carolina to provide troopers and security for the game.

“What we have informed (the University of South Carolina) is we will not be able to give any state support for that game,” said Nikki Haley, the South Carolina governor.

However, the Richland County Sheriff’s Department is ready to take on the task at hand in conjunction with the university police.

“Richland County Sheriff’s Department in coordination with (University of South Carolina) police and our local partners are equipped and ready to perform all functions of security and traffic controls for the game,” said Leon Lott, the Richland County head sheriff via email. “We are ready.”

While it may not be an issue now due to the game being slightly rescheduled, Georgia has been preparing for wet conditions throughout the week, doing things such as soaking footballs in water during practice.

And while Georgia’s kicking game has been unsettling to this point, with the Bulldogs depending on the legs of Rodrigo Blankenship and William Ham, Smart cites that the kicking woes become more of a concern in non-typical conditions.

“The biggest factor in the game is the wind, not the rain,” Smart said. “The kicking game is seriously impacted, which is a concern of mine.”