Five for Friday: Georgia's keys to victory over Vanderbilt

Five for Friday: Georgia’s keys to victory over Vanderbilt 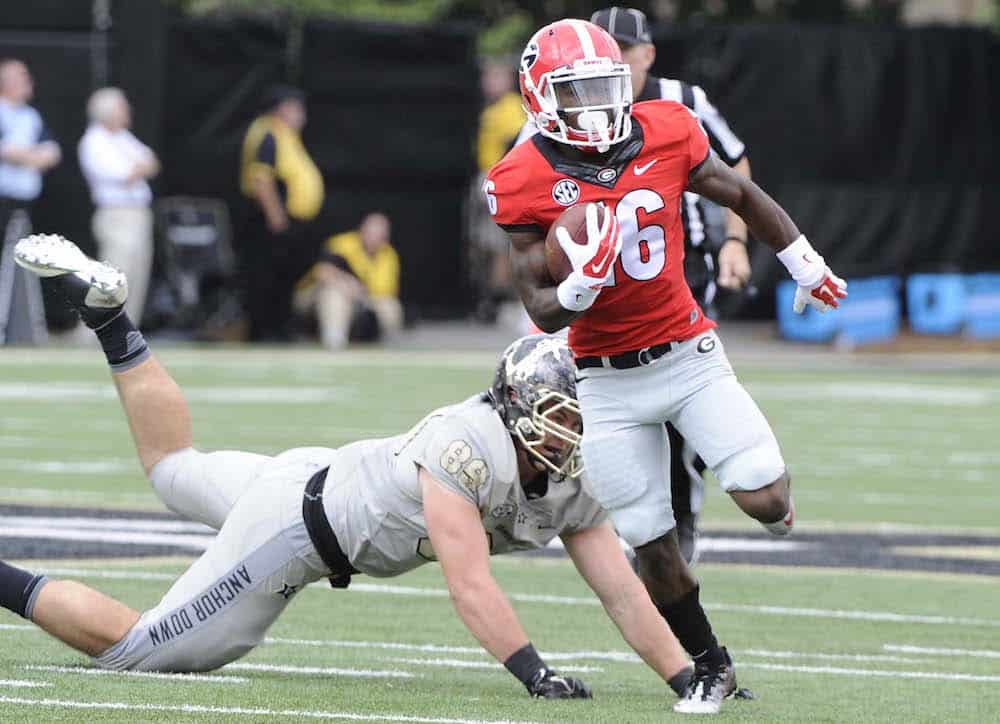 After playing top-tier opponents in Mississippi and Tennessee, then heading out to play South Carolina in a stadium that’s always tough to play in, Vanderbilt (2-4, 0-3 SEC), the current bottom feeders of the SEC East, come to town.

However, that doesn’t mean that the Bulldogs should place the Homecoming festivities ahead of the ballgame and take their opposition lightly (we saw what happened the last time Georgia did that). Derek Mason’s group will come to Sanford Stadium looking to play spoiler, and he has the running back and defensive group to do just that.

As Georgia will look to continue the push to have hopes of winning the SEC East, there are five keys that must be followed in order for the Bulldogs to win.

Georgia had success a week ago against South Carolina, amassing 326 yards against South Carolina. The Bulldogs have been able to stymie opposing defenses the past two weeks after being totally stagnant for the three weeks prior. And this time around, it won’t be so easy to have success on the ground either.

“I remember Vanderbilt being good on defense,” Georgia head coach Kirby Smart said. “He does a lot of things that make it very difficult to execute on offense. He takes away what you do best. They are very physical and they play really hard. They attack the ball.”

Vanderbilt has allowed an average of 176 rushing yards per game to this point in the season, and that gives reason as to why three of the Commodores’ losses have come by a touchdown or less. Therefore. gaining significant yardage by the three-deep tandem of Nick Chubb, Sony Michel and Brian Herrien will be no easy task.

However, if Georgia looks to put up a convincing victory, the amount of talent that the Bulldogs have in the backfield will have to coordinate with their offensive line yet again in order to have holes to run through.

Vanderbilt’s offensive production to this point in the season is quite putrid as the Commodores have averaged only 19 points per game this season. However, they do have one weapon in junior Ralph Webb as he averages 114 rushing yards per game.

With that said, just as Georgia needs to have run production on their end, the Bulldogs must contain their opposition. If Vanderbilt is forced to play without the production of Webb, they’re lost offensively as quarterback Kyle Shurmur has yet to find rhythm with his playmakers in the passing game. Georgia has a good chance to win if Vanderbilt’s offense is not in sync, but it’s no easy task for the front seven to maintain the same production within the run game as they’ve had to this point in the season.

Webb is one of the SEC’s most powerful backs, and Georgia has yet to face a running back with his talent and physicality.

“Vanderbilt is a little different (than past opponents). They’re very good at running the ball and they’re very physical,” Smart said. The biggest problem for us right now is we’ve got a short week and we’re almost having to play a completely different offense. The last couple of weeks, it’s been a lot of carry over, carry over, carry over, with a lot of the same personnel groupings. It’s not that way this week. It’s completely foreign to our kids.”

Georgia has seen spread offenses in Missouri and Ole Miss, but now it’s different. Aside from practice, Georgia hasn’t seen an offense which resembles their own in real-time action.

“It’s different because they run a pro-style offense, which is similar to our offense,” senior outside linebacker Chuks Amaechi said. “We got a good look at that during fall camp and we see it everyday during practice when we go against our offense. It’s going to be nitty-gritty game in between the tackles, and we like that.”

Georgia traveled to Columbia to play South Carolina on a Sunday, so now the Bulldogs have been tasked with preparing for their next opponent with a day less to work with. The Bulldogs used Monday as a usual Sunday, in which they only watch film and strategize without spending time on the practice field.

Therefore, Georgia didn’t have the opportunity to hit the practice field until Tuesday, but the players say they haven’t been fazed with the challenge that lies.

“It’s different, but it’s just another week,” sophomore inside linebacker Natrez Patrick said. “Tuesday and Wednesday are our tough days and we have a plan for this week.”

Smart elaborated and said that no major distractions lie, just a few technicalities are present in which the team is using every free moment in order to solve those issues.

“I’d just say longer hours for the coaches, making decisions a little quicker than you’re comfortable with,” Smart said. “You’ve got to move a little quicker. We started on the bus back on Vanderbilt and used those three hours. As far as the kids go, we try to make it as normal a week (as we can).”

It will be seen as to whether the short week has an effect on Georgia’s play on Saturday, however the Bulldogs must shake off the rust if any is present in order to be victorious.

Capitalize off of turnovers

Georgia’s defense has been strong in forcing turnovers by their opposition as the turnover margin currently sits at +5. However, the Bulldogs can’t seem to convert off of those opposing miscues, with only 30 points scored and 15 turnovers forced.

Needless to say, if Georgia wants to reach its goals this season, that must be cleaned up. The inability to make use of those miscues was evident in the games against Missouri, in which the Bulldogs didn’t score any points off of five opposing turnovers, and could only muster seven points on three turnovers a week ago against South Carolina.

Smart said the formula is simply put, but it’s not easy for it to happen.

“Execute. You have to execute in the red area,” Smart said. “We talk really hard about sudden change, I think everybody in the country does. It’s not one remedy. If we could remedy it I promise you we’d be selling that remedy and we’d be giving it to everybody. It comes down to execution.”

Jacob Eason struggled on Sunday against the Gamecocks to say the least, recording five completions and 29 passing yards. Eason’s season has been up-and-down to this point in the season, as expected by a freshman, but it’s time for a good performance again in order for his team to beat Vanderbilt.

Facing a Vanderbilt defense that is stout in the run game with the talents of juniors Zach Cunningham and Oren Burks, finding success through the air is crucial for the Bulldogs. And Eason continues to improve, he’s always got room to grow.

“He’s got to be more exact in reading coverage,” Smart said. He’s got to be able to communicate a little better. All of those things have been a work in progress since he got here. It’s not like you’re saying ‘Oh, this is what he’s not good at.’ This is what he’s got to improve on. I don’t think anybody on our team can’t improve, including me. We’re trying to improve everybody. It’s just he’s at a position that gets a lot more magnified.

The passing game for Georgia will be one of the biggest keys to a win. If Georgia’s passing game isn’t actively producing, this game could be more troublesome for Smart’s team than some think.