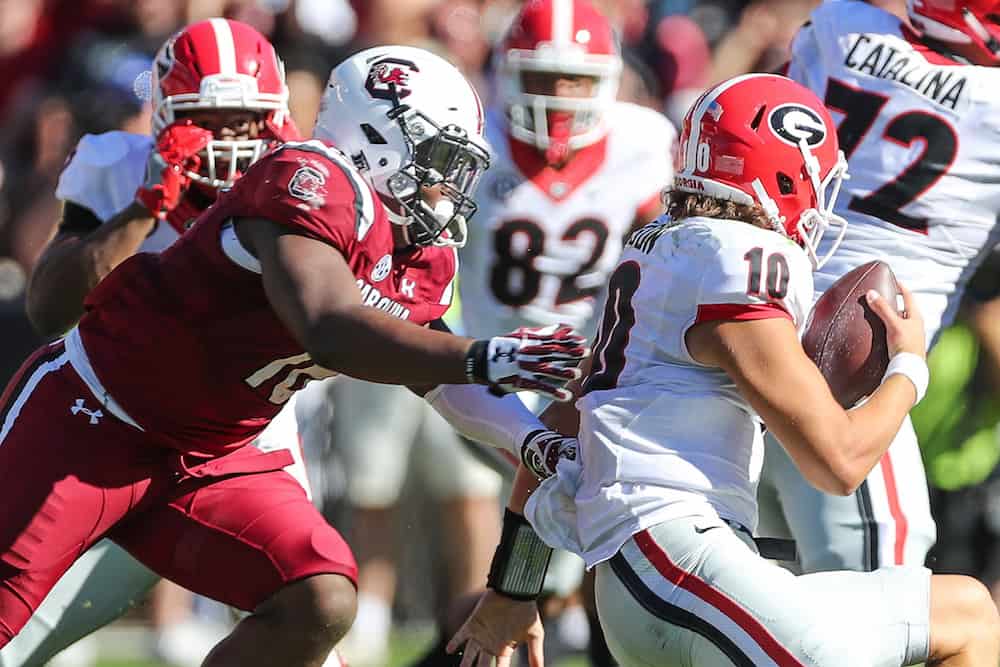 COLUMBIA, S.C. – Georgia is thanking their lucky stars that they were able to run the ball in order to beat South Carolina 28-14 on Sunday, because the passing performance was one for the history books, and not in a good way.

Jacob Eason, the freshman quarterback, collected only 29 yards with only five completions on 17 attempts. This marked Georgia’s worst passing performance since 1990, when the Bulldogs lost to Auburn 33-10, in which the Bulldogs’ signal caller tallied only 28 yards twenty-six years ago.

Meanwhile, Georgia gathered 326 yards on the ground, so it didn’t end up hurting the Bulldogs at the end of the day. However, it is quite a glaring stat.

Eason had many troubles getting in a rhythm with his passing game, and some of that had to do with the wind gusts that were a result of Hurricane Matthew that hit the South Carolina coast just a day before, and the breeze was sustained around 10 miles per hour at Williams-Brice Stadium.

But the wind is no excuse for some of his struggles either as Eason looked out of sync. The freshman overthrew a few passes, one to Reggie Davis that sailed, as well as one to Terry Godwin which would’ve been a touchdown.

“It is tough, especially on a true freshman,” Georgia head coach Kirby Smart said. “He saw things out there that didn’t exist. He’s growing and we have to help him through that, with A, what we’re calling, B, with running the ball, and C, the receivers catching the ball.”

Eason’s blunder in the box score wasn’t to the fault of the freshman, however. A tipped pass by the Gamecocks and caught by opposing defensive back Antoine Wilder on a throw intended for Javon Wims serves as an example of a good throw by Eason that proved costly for his team.

“It’s frustrating,” Smart said. “We’ve had a lot of what we call layups that we’ve missed. If we hit those everybody’s talking about how good the passing game is. But we missed them.”

Eason’s performance of 29 yards on Sunday follows a rollercoaster pattern as clutch showings against Missouri and Tennessee were followed by duds against Mississippi and South Carolina. If that pattern continues, it will be good for the Bulldogs in the short-term as it foreshadows a good showing against Vanderbilt on Saturday.