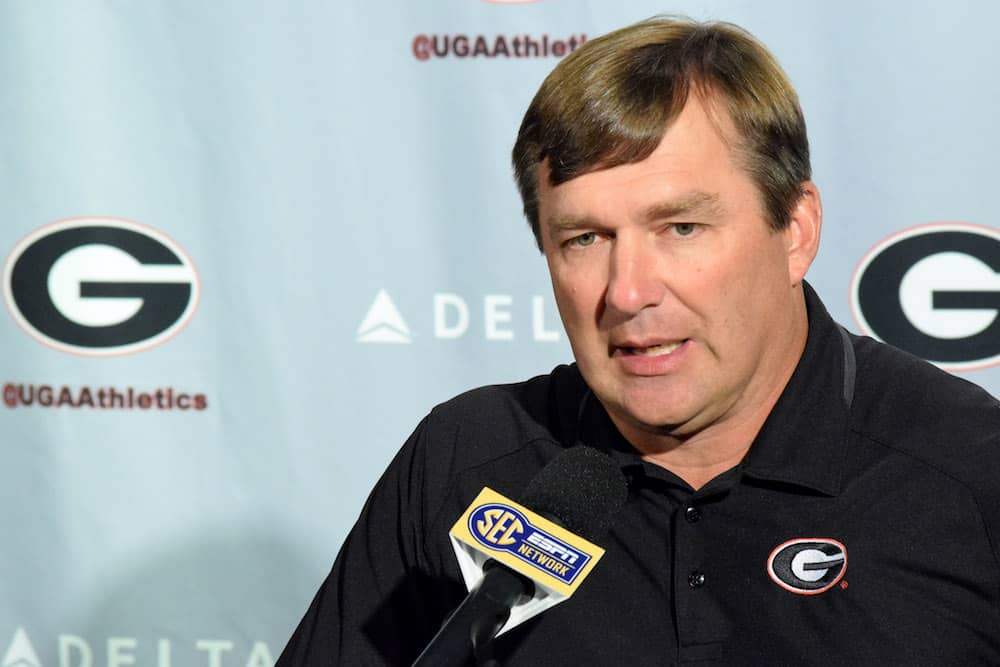 Georgia is now in full preparation for their SEC opener at Missouri, as head coach Kirby Smart said numerous times throughout his Monday press conference.

As the team looks to shake off the subpar performance against Nicholls State, here are three storylines (besides the obvious need for improvement) as Georgia begins to open up planning for the third week of the season.

Georgia’s junior defensive lineman Jonathan Ledbetter has been suspended for the first two games of the season due to multiple run-ins with the law, and it was a possibility that two games would be enough. However, his suspension will continue.

Ledbetter has been arrested twice this offseason, and Smart has been vague on the situation for many months. But that changed on Monday as his response was very straightforward.

He was asked if Ledbetter would play against Missouri this weekend. “No,” Smart replied.

Ledbetter is still receiving treatment for the second arrest of the offseason, which was a severe DUI infraction. But the first arrest was thrown out, after being handcuffed for underage consumption of alcohol and possession of a fake identification. The officer didn’t follow protocol however, and Ledbetter was cleared from charges with that infraction.

Georgia has felt Ledbetter’s absence throughout the first two games of the season as the defensive line has experienced some struggles due to the inexperience. Aside from junior John Atkins, the Bulldogs are rotating freshmen and sophomores to fill those roles. Ledbetter’s presence would be beneficial for Georgia up front, but the the absence continues.

Sony Michel, Georgia’s dynamic backup junior running back, saw action in the first drive of the 26-24 victory over Nicholls State. He didn’t see much action after that, but Smart said that his workload will increase in Georgia’s conference opener.

Michel was cleared for the first time since sustaining an open arm fracture after an ATV accident on July 3. He was in a non-contact jersey throughout preseason camp, and was given the go-ahead just two days ahead of Georgia’s home opener this past Saturday.

In Michel’s intermittent action, he only had two receptions for five yards and didn’t receive a rushing carry. Georgia needs Michel’s talents on a consistent basis however, as he had a successful season in 2015, with 219 carries for 1,161 yards and eight touchdowns. He also caught 26 passes for 270 yards and three touchdowns.

Smart explained the reasoning behind Michel having a light workload, as was expected.

“We weren’t limiting his snaps,” Smart said. “We were trying to get him in situations where he could get some loose plays and get the ball to the sideline, get some confidence – that type of thing.”

Georgia looked as if they’d settled on freshman quarterback Jacob Eason during the second game of the season. But the wheels fell off in the fourth quarter, and Eason failed to show a sufficient amount of progress.

Greyson Lambert then entered the game towards the end, and he managed the game correctly in order for the Bulldogs to salt the clock away. Now, Georgia hasn’t yet found closure at the position, and the revolving door continues.

Smart said that the competition will continue into this week, as the team prepares to head to Missouri to open the SEC slate. The week in practice will determine who starts on Saturday, and if more than one quarterback will play.

“It’ll be based on how practice and the gameplan goes,” Smart said. “As we put the gameplan together and figure out how we want to strategize and attack, it’ll be about who’s better at doing that. That’ll play itself out throughout the course of the week.”

Eason had some flashy plays and displayed his ability to throw the ball deep down the field, but made some incorrect reads and didn’t blow anyone away with his progress from week one to week two. He threw for 204 yards, and had a touchdown on 11 completions out of 20 attempts.

Lambert entered the game late, and didn’t have much opportunity. He utilized his skill set effectively and solidified the victory for Georgia. Most of his action was to set up run plays, but did have two completions. Smart seemed pleased by both quarterbacks after week two, but reiterates the battle for the position is far from settled.

“Watching film, it was exactly what we thought,” Smart said. “Jacob made some mistakes, but he also made some really good plays. For Greyson, coming off of the bench, he did what we asked him to do. I was proud of how he managed the situation that he was brought into.”