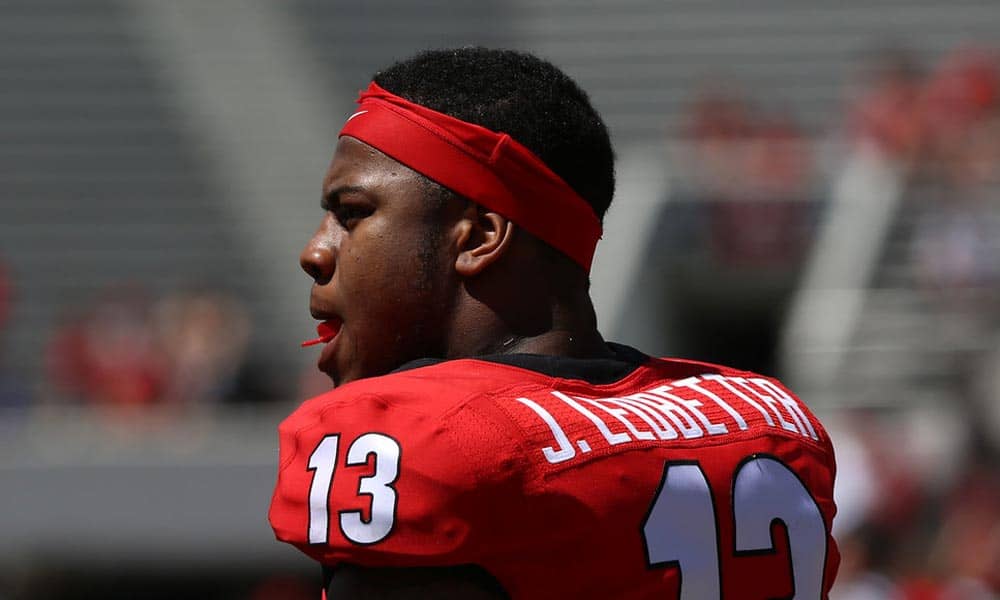 On Sunday, Georgia sophomore defensive lineman Jonathan Ledbetter was found asleep in his car in Athens after a call was issued for a vehicle blocking traffic. This led to the Georgia football player being placed in handcuffs, and the details are quite extreme.

According to the incident report obtained by Jason Butt of The Telegraph, Athens police arrived at the intersection of Barrett Shoals and Lexington Road in Athens to find a man asleep, who was later identified as Ledbetter, while his car was running. The police exhausted multiple efforts to wake Ledbetter, such as blaring a siren and tapping him after opening his vehicle with a lock jock, but were unsuccessful for nearly a half an hour.

When Ledbetter awoke, by an unclear stated tactic by police, he was asked if he had been drinking. His response was, “Yes sir, I’m home.” Ledbetter then said that he had been downtown and only consumed a couple of Bud Light Platinum beers. The police then informed him that he was not at home and he would be subject to a field sobriety test.

In the middle of the test, the officer asked Ledbetter if he would be willing to take a breath test, stating that it is voluntary. The report states that Ledbetter had some initial objection, in part to his role as a football player at Georgia and the current events surrounding the conflict between police officers and African-Americans.

“(Ledbetter) proceeded to explain that he knows what’s going on in the world now with cops shooting black people and he also said that he wanted to know if he passed the test or not so that he could just take his boys home. There was no one in the car except for Mr. Ledbetter when I arrived on scene. He also explained that he feels like this is a hate crime. I asked Mr. Ledbetter again if he would be willing to submit to the breath test and he said, ‘I will submit to any test that you want me to do.’ He expressed that he plays football for UGA and that he does not need to get into any more trouble because he is going to get kicked off of the team and that he needs to provide for his mother and family.”

Ledbetter did end up submitting to the breath test after all, and the results were quite staggering. His alcohol level on two different tests were .131 and .138, while the Georgia legal limit is .08.

Ledbetter was booked into the Athens-Clarke County jail at 6:05am ET and released at 10:24am ET on a $2,000 bond. He was charged with a DUI and underage possession/furnishing of alcohol.

On Monday, both Kirby Smart and Jonathan Ledbetter released statements on the issue. Smart says that Ledbetter will not be dismissed, but numerous measures will be taken.

“Certainly we are disappointed and recognize he has a serious problem,” Smart said. “We have provided help for him previously and we are committed to providing whatever assistance is necessary for Jonathan that will contribute to immediate improvement but also ensure that his long-term well-being is secure.”

Ledbetter followed his statement in the press release, apologizing for his actions and validating he in fact had a problem.

“First I want to apologize to my family, my teammates and coaches, the University and the Bulldog Nation,” Ledbetter said. “I have a problem and have received an incredible amount of support and treatment through the Athletic Department for the problem. For that I am thankful.  I ask for everyone’s support as I continue to receive additional treatment for this disease and work toward a healthy life.”