Five for Friday: Things to watch for during Georgia-Tennessee

Five for Friday: Things to watch for during Georgia-Tennessee 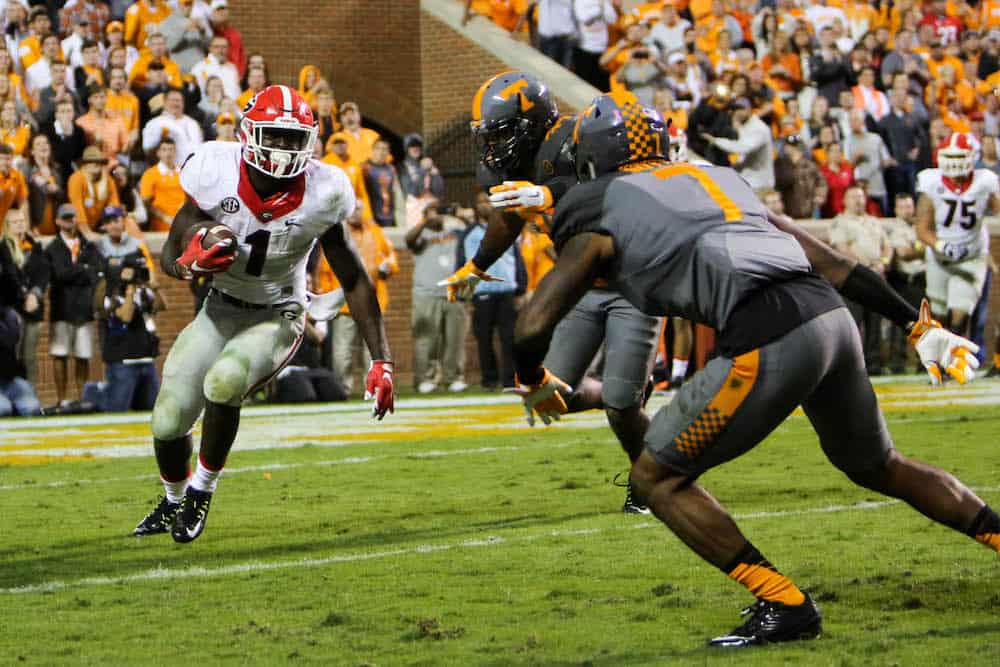 The Bulldogs head back to their home turf for the second time this season, and they’ve got a formidable challenge ahead of them as the Tennessee Volunteers come to town. Last weekend, each team went in different directions. Georgia fell flat against Mississippi, 45-14, while Tennessee beat Florida by a respectable margin of 17, ending their 11-game losing streak to the Gators.

As the two programs meet yet again, Georgia looks to rebound from a 38-31 defeat to Tennessee last season. Kickoff is near in this SEC East showdown, there are five things to look for in this all-important game.

Georgia junior running back Nick Chubb suffered a devastating injury, tearing his LCL, MCL and PCL, the last time that his team played Tennessee. Chubb made a full recovery, and has started for Georgia in each of the four games to begin the season. However, last week against Ole Miss, Chubb was pulled from the game in the second quarter after sustaining an ankle injury.

Chubb had amassed 57 yards on 12 carries before being sidelined, and didn’t return to the game. Since then, the star running back’s status has been in doubt. On Monday, Chubb was spotted in a walking boot and was absent in each media viewing practice period this week. Bulldogs’ head coach Kirby Smart addressed Chubb’s status earlier in the week.

“He’s going to continue to rehab really hard,” Smart said. “We’re obviously hopeful he’ll be able to do something, but we won’t know more until later in the week. But it is an ankle injury.”

Well, approximately 24 hours remain until kickoff, and there is nothing known in terms of progress as his availability is still ruled as questionable. If Chubb is to miss Saturday’s game, Georgia’s offense will be a bit hampered due to his ability. However, Georgia has younger backup options with Brian Herrien and Elijah Holyfield, and both of the young backs saw action last Saturday in order to be more prepared for upcoming situations.

“With Nick’s injury, we didn’t know at the time whether or not if he was going to be able to play this week,” Smart said. “We still really don’t. So we were sitting there going, ‘We better get Elijah ready.’ And he did a nice job coming in, catching the ball out of the backfield, running the ball. He runs really hard and runs with good toughness.”

UPDATE: Chip Towers of the AJC has reported that Nick Chubb is out for the Tennessee game.

Can Joshua Dobbs be kept in check?

Georgia won’t be tasked with a spread offense again this week, however Tennessee quarterback Josh Dobbs had a game for his career record books against Florida, throwing for 319 yards and two touchdowns in their 38-21 victory.

And with Georgia’s secondary allowing 706 yards in their first two SEC games, they’ll have to be focused in order to not be taken advantage of yet again. Georgia’s back end has taken a big drop from 2015 as they were the best passing defense nationally. Needless to say, if Georgia still has aspirations of winning the SEC East, it must improve immediately for this pivotal game.

“It’s another challenge for us to go up and make some plays and get some guys in the game that can compete and fight to make the plays down the field,” Georgia head coach Kirby Smart said. “Ultimately, you’re going to be in those opportunities, those situations where you’ve got to win some one-on-one battles out there. We’ve got do a better job of doing that.”

The Bulldogs have apparently made a recent move in the secondary, replacing sophomore Juwuan Briscoe with sophomore Deandre Baker as Baker has been running with the first-team in practice this season. Baker will have a tough task ahead of him, given that he will indeed start. At 5-foot-11, he will be undersized against the Tennessee wide receivers, with their shortest playmaker being 6-foot-3.

In addition to Dobbs’ passing ability, he presents a dual option as well. This season, Dobbs has tallied 241 yards, with a heavy workload of 54 carries, and four touchdowns on the ground. Smart spoke on Dobbs’ skill set and versatility, he serves as Georgia’s third quarterback test in consecutive weeks.

“Josh Dobbs is a phenomenal player who plays the game with heart and energy,” Smart said. “He plays with a great toughness. They ask him to run the ball up the middle, he does it. Ask him to run outside, he does it. He’s become a much better passer over the last two years than the first year we played against him.”

Regardless of who Smart sends out there, the production must improve or the Bulldogs are in trouble yet again.

The place kicking abilities remain a concern for the Bulldogs, and converting on opportunities is imperative against Tennessee. If Georgia is to leave points on the board in a potentially close game, it would be very costly in a game of such importance.

Last week, Rodrigo Blankenship took over the field goal duties from William Ham, and wasn’t any more beneficial as the sophomore missed a 36-yard field goal. Georgia does not have another dependable option to turn to, aside from freshman Mitchell Wasson, who can’t emerge from the competition.

The Bulldogs won’t be able to find a consistent option until next season. However, until then, the Bulldogs’ specialists must gain some confidence and convert on some of the opportunities.

Georgia may have some troubles against the Volunteers defensive line group on Saturday as Derek Barnett and Corey Vereen have wreaked havoc on opposing quarterbacks throughout the early stages of the season.

Barnett and Vereen have combined for 21 tackles and three sacks this season, therefore creating a significant amount of concern, especially against Georgia’s offensive line, a group which has struggled to this point. Smart addressed the upcoming challenge, discussing the difficulty of containing the vaunted rush.

“A lot of teams have that dominant guy that changes the game for the offense. Hard to block,” Smart said. “Well, they’ve got (Barnett) and Vereen, who are really good players. When you got two of that caliber it’s tough to game plan for. Again, you’ve got to do a good job blocking and tackling in order to be good at the fundamentals. That’s what Saturday is going to come down to – who blocks and tackles the best and makes the plays at critical times.”

It’s a big day on Saturday for the Bulldogs on the field, but it’s just as important off of the field for Kirby Smart as well.

Georgia will host over 50 recruits, on both official and unofficial visits, in an attempt to convince them to join the program. A total of 13 commits will be on hand, in addition to top-tier targets such as defensive back Jeffrey Okudah, linebackers Nate McBride and K.J. Britt as well as offensive linemen Trey Hill and Jamaree Salyer.

Take a look at what some of them had to say as their visit nears, in a feature with The Telegraph and macon.com.