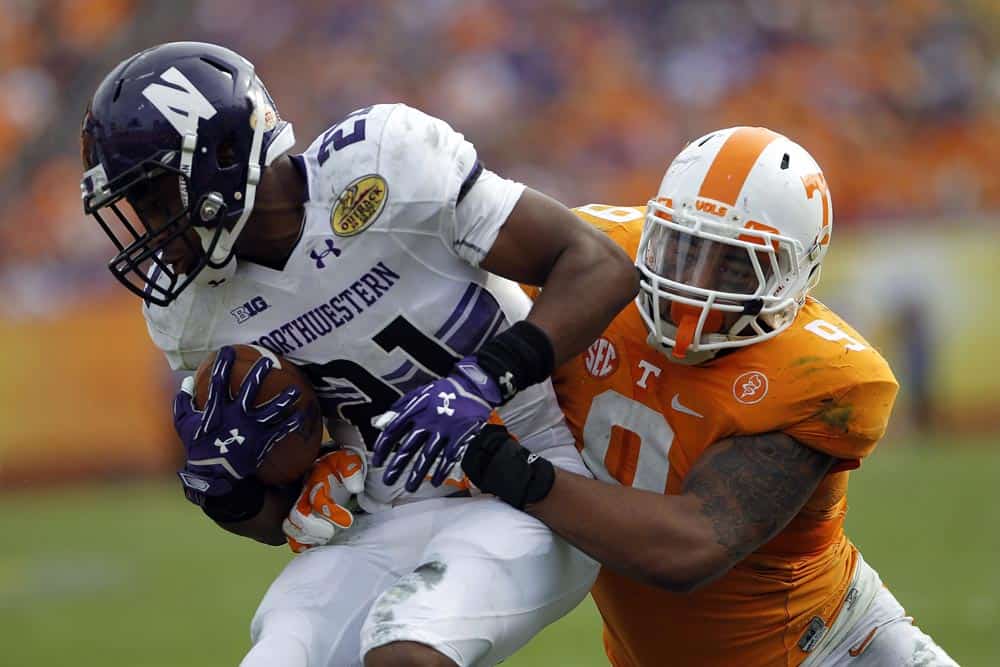 Georgia’s offensive line has been tasked with facing the talent of Charles Harris at Missouri and Marquis Haynes at Mississippi, and now a new challenge awaits them in defensive lineman Derek Barnett as Tennessee heads to Athens for a SEC clash.

Barnett has been one of the driving forces for Tennessee’s defense so far this season, especially in the Volunteers 38-21 victory over Florida last weekend, which involved a big second half comeback. Throughout Tennessee’s recent victory, Barnett amassed five total tackles with three of them for a loss as well as two sacks and a pass breakup.

He was awarded for his valiant efforts in the final 30 minutes, being named as the SEC co-defensive lineman of the week. As a result of Barnett’s recent performances, a red flag is raised in terms of protecting freshman quarterback Jacob Eason, and Georgia head coach Kirby Smart is well aware of the issues that could arise.

“First of all, he’s a phenomenal athlete and he’s big, so when you’ve got a big, athletic guy, he can play a lot of positions,” Smart said. “They can move him around. He’s a dominant rusher, plays the run well. Really not a lot that you can say the guy does poorly. When you have a guy like that, you’ve got to know where he is at all times.”

Due to his talents and game-changing ability, Georgia will target the junior pass rusher and hope to contain him. However, Barnett possesses versatility, and can play both on the edge and inside, so it’ll be no small task.

Throughout the course of the first four games of the season, the 6-foot-3, 265-pound defensive end has tallied 18 total tackles, again giving reason to have concern. Prior to each play, Eason and senior offensive lineman Brandon Kublanow will have to lead the offensive group and indicate where Barnett is at all times.

“It’s really not easy to game plan because they can move him around,” Smart said. “So it’s more of an ‘I’m up to the challenge.’ When this guy is here, you’ve got to know where his presence is at all times, because (Tennessee defensive coordinator Bob) Shoop and them do a good job of using him. He’s a talented rusher.”