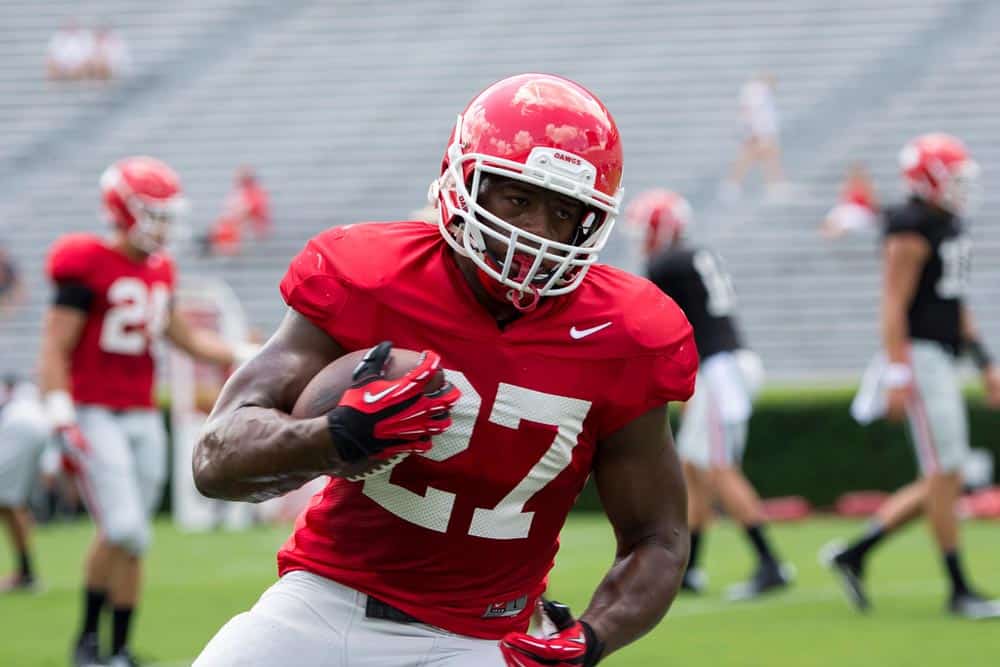 The Georgia Bulldogs are over half way through Fall camp, and junior running back Nick Chubb has been a full-go since day one.

Chubb appears to be fully recovered from his LCL, MCL, and PCL tear that he suffered last season against Tennessee in Knoxville.

On Wednesday during an interview on 680 the Fan’s The Front Row, host Steak Shapiro asked UGA head coach Kirby Smart about the possibility of Nick Chubb playing in the season-opener.

Below is the full text from the exchange between Steak Shapiro and Kirby Smart on the topic of Nick Chubb.

Shapiro: “Nick Chubb going to be on the field at the Georgia Dome opening day I would imagine?”

Shapiro: “But everything looks like it’s moving exactly the way…”

Smart: “It’s pointing in that direction.”

Shapiro: “He (Chubb) said the refs were almost trying to protect him a little bit at the scrimmage the other day.”

Shapiro: “Does he remind you of anybody you’ve coached in the past or seen on the offensive side?”

Smart: “No, he’s a different demeanor kid. Most backs I’ve been around are maybe a little more showboating type. But he’s not like that at all. He’s very quiet, very humble, and very hard working.”

In what is great news for Dawg fans, Kirby Smart sounded cautiously optimistic about Nick Chubb playing without giving too much away. Chubb may not start the game, but it appears that Bulldog fans will, at the very least, see Chubb carry the ball against the Tar Heels on Sept. 3.