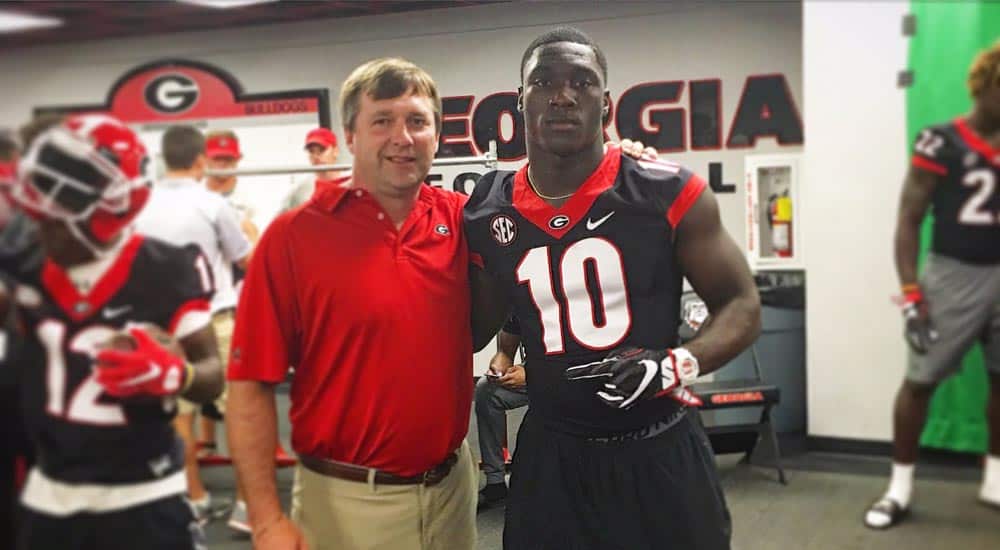 Dozens of top recruits from around the country are in Athens this weekend for the Kirby Smart High School Camp.

According to UGA, the camp “is formatted around four practices. Between practices, campers will also watch highlight videos, tour Sanford Stadium, and play in games.”

On Friday night, the recruits engaged in a different activity — wearing black UGA football jerseys. Several recruits and campers donned the jerseys and shared their pictures on Twitter.

How about them dawgs?! 🐶🐶 pic.twitter.com/h53bQK2vTZ

Recruits wearing black jerseys during their visit to Athens is nothing new, however. 2016 signee David Marshall was pictured in a black jersey in January shortly before signing with the Bulldogs. Recruits also wore black jerseys on campus several times in the past few years under Mark Richt.

Georgia hasn’t worn an alternate jersey since falling to Boise State 35-21 in the 2011 Chick-fil-A Kickoff Game while wearing the highly controversial Nike Pro Combat uniforms. The last time the Bulldogs utilized black jerseys was in 2008 when Alabama came to Athens and rolled over the Bulldogs 41-30.

Although jerseys and uniforms don’t have an effect the outcome of a game, Georgia has a 2-1 record when wearing black jerseys, the two wins coming over Auburn in 2007 and Hawaii in the 2008 Sugar Bowl.

KJ Britt, who sent out the first tweet posted above, also tweeted the following:

Lol yes people. UGA will have black Jerseys this fall

Georgia first wore black jerseys at home in a 45-20 thumping of Auburn. It was the first “blackout” game under Richt. Richt called for a blackout again for the Sugar Bowl against Hawaii on Jan. 1, 2008.

With Alabama in town, the Bulldogs again called for a blackout and wore their black jerseys. The Crimson Tide went up 31-0 on the Dawgs at the half and eventually won 41-30.

Against Florida in Jacksonville, the Dawgs wore a uniform with black helmets (red facemask/white stripe/traditional “G” logo), white jerseys with black numbers, and black pants. The Gators rolled over the Bulldogs 41-17.