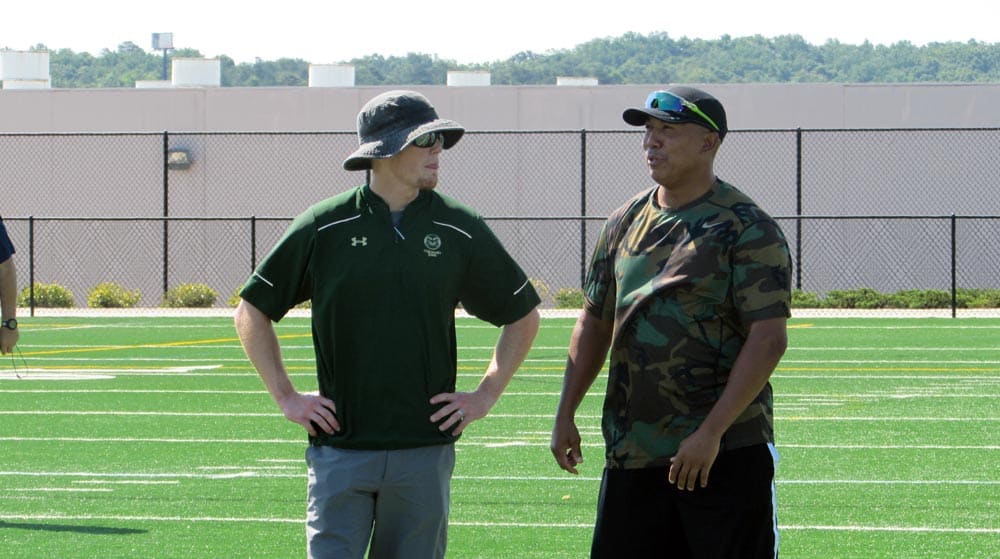 Buford, GA – Georgia Southern held a collaborative satellite camp event on Thursday morning in Buford, with Georgia, Colorado State, and other local lower division schools on hand as well. The Bulldogs brought many to the party, as nearly the entire coaching staff was present except for wide receivers coach James Coley.

Instead, another wide receiver guru from Georgia made an appearance, Hines Ward.

In his interview with the media, Ward was first questioned about his desire to coach for the Bulldogs. He reiterated that he would rather coach within the state than have a television job.

Ward then moved on to discuss the arrival of five-star quarterback Jacob Eason. Earlier this week, SicEmDawgs.com wrote that Greyson Lambert should start against North Carolina on September 3rd. However, Ward seems to disagree and thinks that Eason should get the nod.

“I say play him (Eason),” Ward said. “Playing him is the best experience you can get, just don’t overwhelm him. By being on the field, you definitely learn faster than sitting on the sideline.”

Ward went on to say that he has only seen Eason on television, when his Lake Stevens High School team had the opportunity to play on ESPN a couple of times. Although he only has a small sample size, he seems to believe his big arm is legitimate and will bring a lot of excitement to UGA’s program.

Former Georgia offensive coordinator and current Colorado State head coach Mike Bobo seems to agree with Ward, as he says he will definitely have the chance to be successful. Bobo recruited Eason during his tenure in Athens, and believes he can be a game changer.

Georgia has not yet resolved the quarterback battle, and will not do so until after fall practice. At the current time, it is believed it will be a committee type of situation where both Eason and Lambert will have reps.