3 reasons why Greyson Lambert will start against UNC

3 reasons why Greyson Lambert will start against UNC 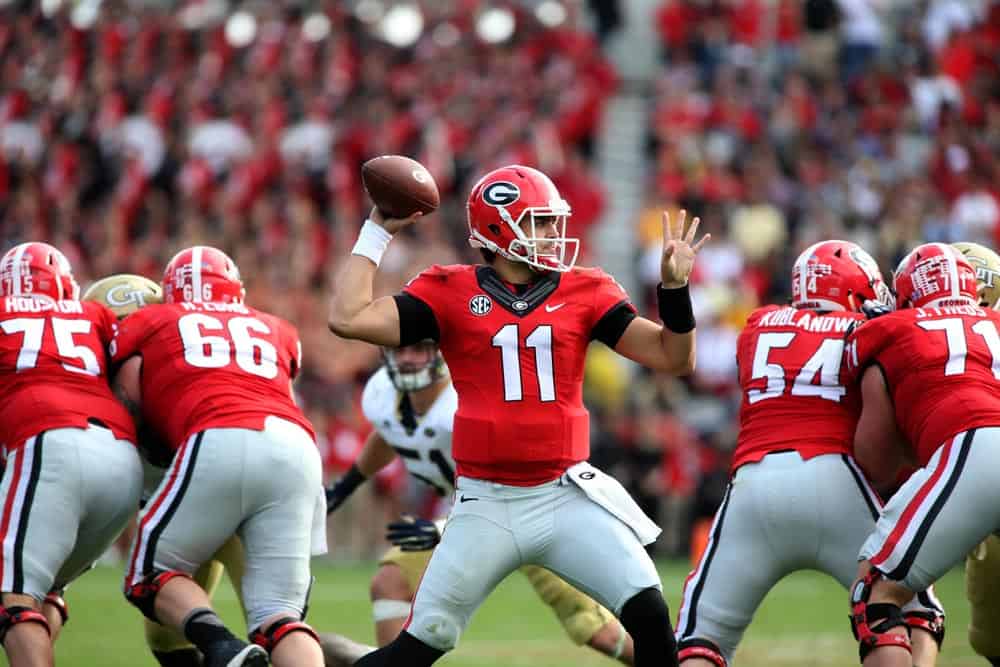 The buzz around Georgia’s football program ever since Kirby Smart stepped foot on the university campus has centered around the starting quarterback role.

The three competitors for the spot, Brice Ramsey, who figures to be Georgia’s backup punter, Greyson Lambert, and the hyped, five-star freshman Jacob Eason, have been fighting to be behind center on the first Saturday of September since spring practice back in March.

While the coaches say the starter is unnamed and up in the air, there are clear reasons as to why Lambert will earn the role for the Bulldogs over Eason or Ramsey come their opener against North Carolina on September 3.

The primary reason as to why Lambert will earn the starting role is the simple fact that he won’t do enough wrong to lose his team a game. While he may possess an average arm and an inability to successfully escape the pocket at times, he will rarely throw a senseless pass which may lose the game for Georgia. Last season, this was shown as Lambert only had two interceptions on the year, and was never the main culprit to any of the Bulldogs’ three losses last season.

The factor of experience also intertwines with that of Lambert’s dependability. In the case of Eason, it is very rare to see a freshman quarterback take the reigns immediately on a power-five conference team, who potentially could contend for a championship this season.

For Brice Ramsey, he has yet to start consistently in his first two seasons at Georgia, and when given the chance, he has impacted Georgia’s chance to win the game on multiple occurrences. Therefore, Lambert’s three seasons playing with two different power-five teams would pose an argument as to why he deserves the starting role.

Lastly, as this is said only somewhat jokingly, Lambert does hold the NCAA pass completion record at 96%.

Another reason why Greyson Lambert needs to start for Georgia in the season opener is because Jacob Eason needs to be eased into his role. Very rarely do you see a freshman quarterback take the reigns on a football team facing top competition, and that shouldn’t happen with Eason, even if he is expected to be Georgia’s program cornerstone for the coming years.

Georgia should play Eason intermittently, allowing him to have exposure in the season opener, but only in a situation that carries minimal pressure and gives him little chance to make a big mistake which may cost Georgia the game. The opportunity for Eason to take a majority of the reps lies in the home opener against Nicholls State the following weekend. The aspect of showing what he’s made of both against superior and inferior competition will create a clearer picture than practice reps for the UGA coaching staff on who deserves the role throughout conference play.

Lastly, Greyson Lambert deserves the role to open the season because he deserves the opportunity with a legitimate offensive core. Last season, his numbers were unimpressive, as he was rattled frequently and averaged only 7.7 yards per completion. The fans were in an uproar last season as they thought he wasn’t getting the job done effectively, and that may have been the case. However, he only had one true weapon to throw to in Malcolm Mitchell, and Brian Schottenheimer’s efforts were putrid as the offensive coordinator.

Lambert is now given a new core and a host of talent both on the field and on the sidelines. The year of experience under Terry Godwin’s belt, the addition of Javon Wims and Mecole Hardman Jr., in addition to proven offensive coordinator Jim Chaney should give Lambert a more legitimate chance to show what he’s made of.

All of these reasons should illustrate why Greyson Lambert should start off the season for Georgia, and some of his teammates seem to agree, including freshmen Isaac Nauta and Javon Wims. Although fans rave over what Jacob Eason brings to the field and rightfully so, expect the experience of Greyson Lambert to begin the all-important first season in the new era for Georgia.