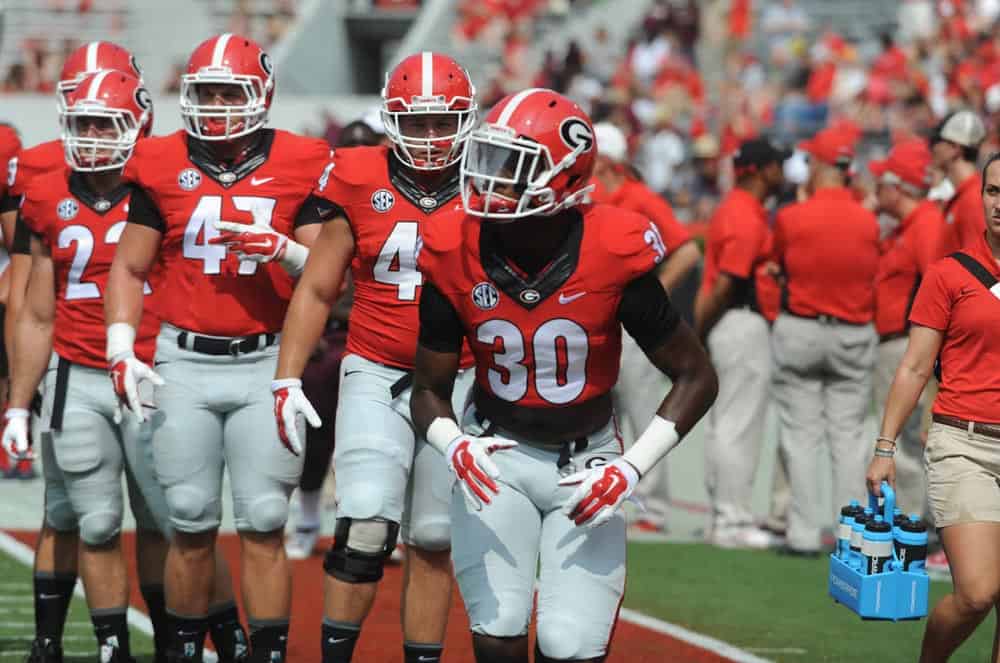 As we have now reached the fifth day of spring practice, Kirby Smart has openly voiced his concern on the lack of depth at the all-important running back position.

A.J. Turman has transferred, Nick Chubb may not be 100% by the opener in September, and Brendan Douglas is recovering from a wrist injury. Georgia only has junior Sony Michel available with experience and a clean bill of health. Therefore, some may tend to believe that the Bulldogs have dug themselves a hole and won’t be able to find their way out.

Redshirt freshman Tae Crowder looks to prove that belief to be wrong and bolster Georgia’s depth, and Kirby Smart certainly believes he has what it takes.

“Tae is a kid who has good size, as he played high school receiver,” Smart told reporters in a post-practice press conference. “He kind of outgrew the position, and he’s improving while he may not be a naturally instinctive runner right now.”

Smart went on to say he believes his running abilities will improve when he receives a heavier load of carries throughout practice. However, following his compliment of Crowder, he indicated a concern he had with his progress.

“He’s a guy that has to show more toughness,” Smart continued. “He needs to run it up, and stick it (between the gaps) in order to help us, because we certainly have a depth problem there.”

Crowder has been a bit of a “diamond in the rough” prospect, and many people don’t know what he brings to the table. At the beginning of spring practice, we broke down the running back position, giving scenarios on how each candidate could contribute to the program.

More on Crowder, and a word from a former teammate can be seen here.

Crowder seems to be a guy that can pan out and be an immediate impact in Dell McGee’s system. However, if he comes short of expectations, Smart’s depth concern can be relieved with signee Elijah Holyfield, who is expected to arrive over the summer and has a skill set to make a significant difference.

VIDEO: Full comment on Crowder by Smart, thanks to Bulldawg Illustrated.