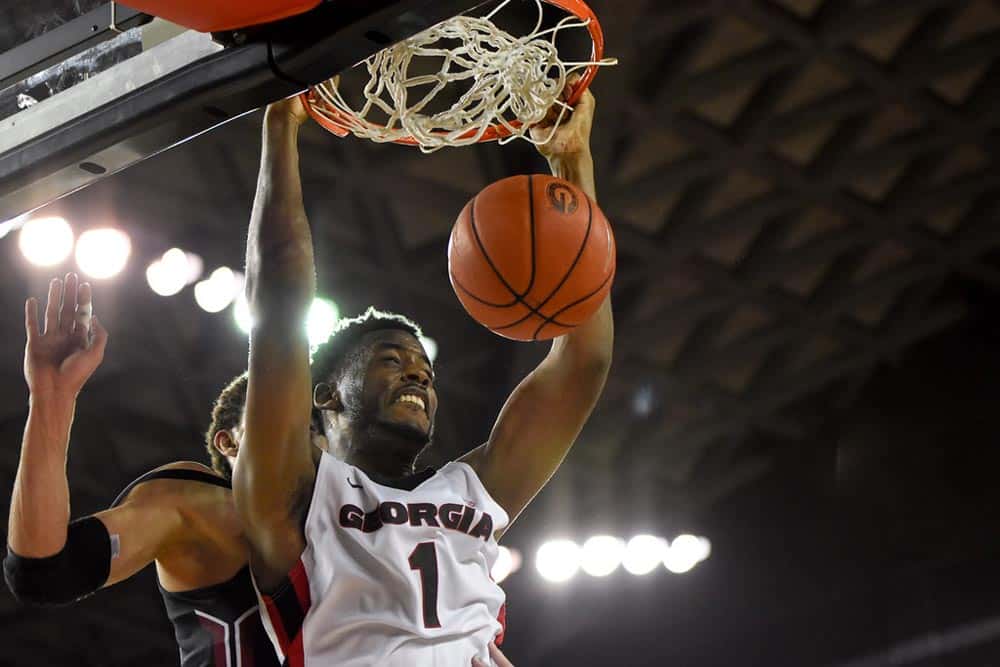 Georgia claimed a solid 79-69 victory against Mississippi State just a short night ago, but as said by junior guard J.J. Frazier postgame, Georgia must “flush it and move on.”

(1) On the South Carolina front, leading scorer Michael Carrera is out tonight with a nagging hip injury. Carrera averages 14.5 PPG as well as 7.7 RPG, and didn’t see action in their victory to conclude the regular season last Saturday.

His absence leaves a big void for the Gamecocks both on the glass and in the scoring column. Gamecocks head coach Frank Martin stated on a radio show that Carrera didn’t practice in Nashville, and he could try to hold him out until the NCAA Tournament, according to 247Sports. South Carolina will turn to guards Sindarius Thornwell and Duane Notice to produce in more ways than one. Regardless, having those guards play out of their comfort zone serves as an advantage for Georgia.

(2) Mark Fox has had success in the opening game of the SEC Tournament, as shown in the past three seasons as he has advanced in each. However, the same cannot be said for the following game. Fox is 0-5 in the second game of conference tournaments. If Georgia continues to struggle in the second half and become complacent, Fox could add another loss to that record.

(3) J.J. Frazier has carried the team on his back and has sufficiently run the offense. In order for Georgia to advance, similar production from Frazier is necessary. I’m not saying he needs to go out and replicate a 28-point showing as he did a night ago, but Georgia can’t maintain an offensive flow when he is performing under his standard. If Frazier can compliment the other impact players (Gaines, Mann and Maten), Georgia will have a solid chance of claiming a rare third victory over an opponent during a single season.

Georgia will not have an easy time of it, and it could very well be similar to the game in Colonial Life Arena just nine short days ago. The Bulldogs offensive production didn’t reach its peak last night, as senior guard Kenny Gaines was off of his game.

With that said, a slight uptick in his production in coordination with a substantial offensive flow will be able to send Georgia to a semifinal for the third consecutive season. For South Carolina, the absence for Michael Carrera leaves too much of a void and will be a factor in sending them back to Columbia early in order to prepare for the NCAA Tournament.