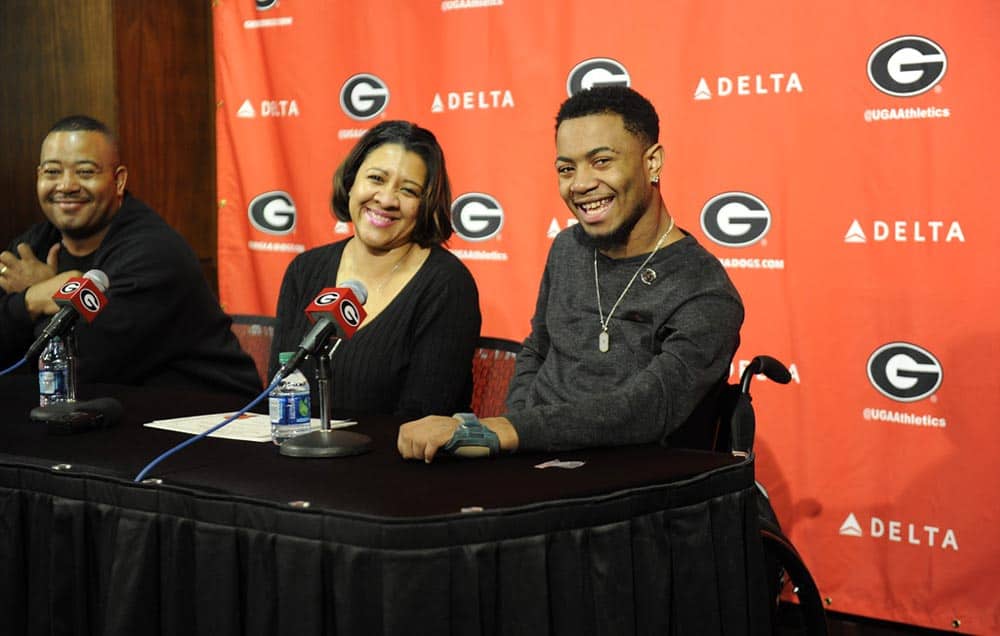 On September 26th, Sanford Stadium was in shock as Southern University wide receiver Devon Gales was motionless on the ground. After that moment, many challenges were ahead of him and, rather than quitting after sustaining such a life-altering injury, he did exactly the opposite as the mission of “walking again” became more and more prevalent.

Everybody involved in Devon’s situation from his neurosurgeon to the Triumph Over Tragedy Foundation who has granted the Gales family a new accommodated home, his impact is well known.

“(Devon) is a young man who has shown great courage from adversity,” Courson said.

Courson has been in the business of athletic training for many years, and has seen injuries that are serious and life-altering. However, the mindset and outlook displayed by Gales is something that is very hard to find, and it’s certainly remarkable through the eyes of many.

Devon Gales has come a long way since the time of his injury, and his sense of humor and faith have been a driving force in turning the potentially tragic situation into one that has been full of inspiration, support from others and quite memorable in a positive way.

“I’ve gotta have faith in the Lord,” Gales told me after the press conference. “(Along with that), I must treat this whole situation like football.”

Gales’ mindset is in the right place, as it seems like regardless of the situation, he will never quit and continue to push towards his goals. David Pollack gave quite a motivational message as the moderator of the press conference. He had given connections to his adverse times and compared them with Devon’s situation, as Devon’s is on a much greater scale. Pollack’s message was highlighted by an inspirational statement, “Don’t let someone tell you what you can’t do.”

Pollack’s statement further prove what Gales has done. Perseverance is a big part of getting through such a tough challenge, and the outpouring of support is well deserved due to his refusal to quit.

Gales’ physical triumphs have resulted in being granted a great deal of recognition. Athens mayor Nancy Denson named Devon “an honorary citizen of Athens-Clarke County,” as that gift understates the impact that Gales has had on the community.

Along with the honor, Gales will return back to Baton Rouge with an accommodated Dodge Charger as well as the previously mentioned accommodated home. Devon’s parents, Donnie and Tanisha Gales, stated that these blessings given to their family have “taken a weight off of their shoulders” and they can fully focus on Devon’s physical progress rather than having financial concerns.

With that said, Devon, the Athens community is ecstatic to support you through this journey. From the University of Georgia athletic program assisting him by purchasing your “pretty blue wheelchair” to the team of doctors at Athens Regional Medical Center and the Shepherd Center for furthering his physical progress. Your triumphs come at a greater weight, and our support is the least the community can do. As you head back to Baton Rouge, we know you will conquer the many challenges that come your way, and you will walk again if you continue to have the same level of determination.