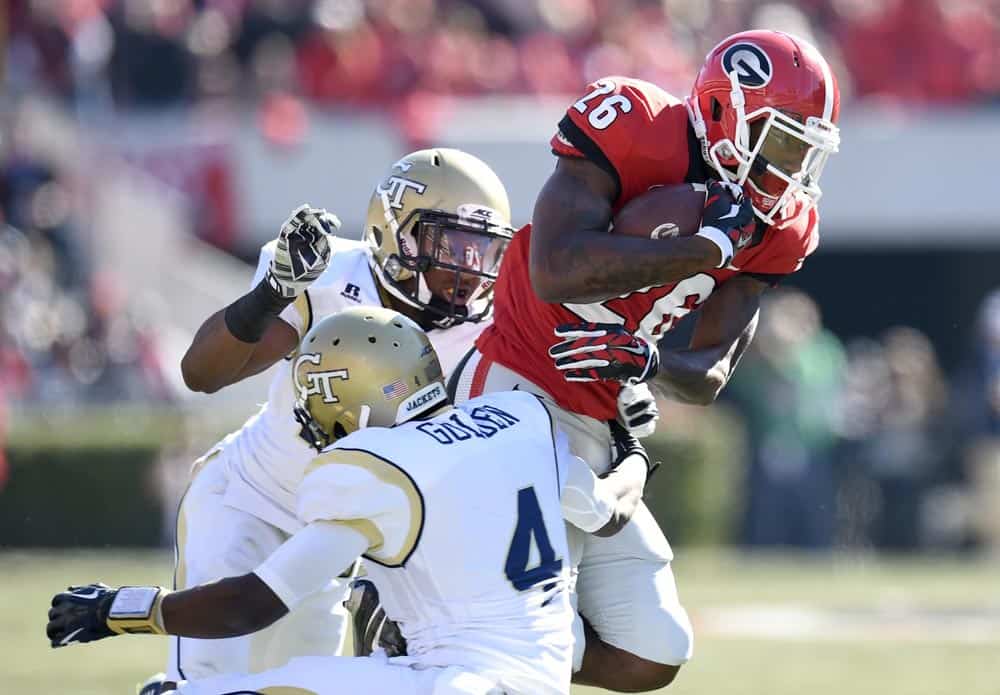 ATHENS, Ga. – The Georgia Bulldogs worked out for over two hours Tuesday afternoon in preparation for their regular-season finale this Saturday at Georgia Tech.

Georgia leads the series 64-38-5 and doesn’t count two Georgia Tech wins during WWII (1943-44) when the Yellow Jackets utilized players from a naval officers training program hosted on campus. The Bulldogs are 12-2 against Georgia Tech under Mark Richt, including 7-0 in Atlanta.

Still, the closeness of most recent meetings in this series reflects how seriously both programs take this game. The last two games in the series have been decided in overtime, with each team winning on the other’s campus. ”Without a doubt, it’s a big rivalry game, one that has been extremely close,” Georgia coach Mark Richt said. ”Just about every time we play, both teams get up for this game, both fan bases get up for this game. Everybody knows how important it is and we don’t run away from that fact.

For the Georgia players, last year’s overtime loss to Georgia Tech was a memory that stayed with them for awhile. It was compounded perhaps by the game’s place at the tail end of Georgia’s schedule. ”It stuck with me a lot,” said senior OT Kolton Houston. ”Just in the program’s standpoint you have to wait a whole month for that next game. All of last December you had to just stick with that loss to them.”

Academically speaking, the Bulldogs have the entire week off with Thanksgiving break. However, they’ll continue their normal pre-game routine on Wednesday, with practice scheduled for the afternoon.

Kickoff on Saturday is at 12:00 p.m. (EST), with Beth Mowins, Anthony Becht and Paul Carcaterra broadcasting the game on ESPN2.