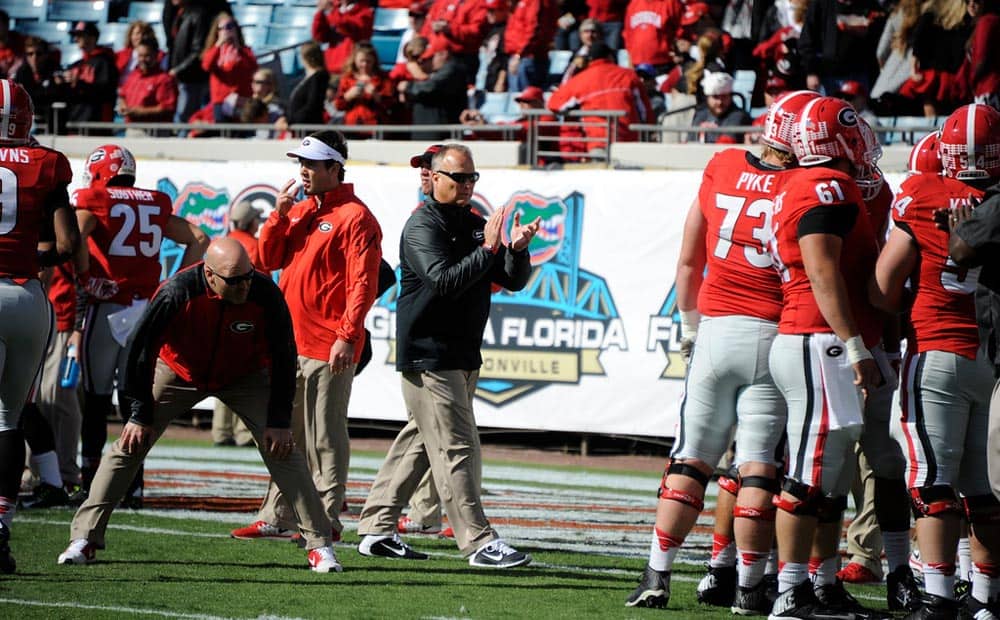 ATHENS, Ga. – The Georgia football team resumed its preparations for Saturday’s game against Florida with a 90-minute workout in shells on the Woodruff Practice Fields.

The Bulldogs (4-2 overall, 2-2 SEC) and the 11th-ranked Gators (6-1, 4-1) will meet in a critical SEC Eastern Division contest in Jacksonville on Saturday at 3:30 p.m. Florida currently stands first and the Bulldogs are second in the division.

Saturday’s game will be televised by CBS.

The Bulldogs endured a steady rain and temperatures that dipped into the 50’s as they practiced on their FieldTurf surfaces.

“The weather wasn’t ideal, but it did not impact the way we practiced,” Georgia coach Mark Richt said. “We got the work in that we wanted. I thought the guys showed a lot of purpose and focus and energy coming off their break. It was a good start to the week and we’ll keep it going on Tuesday. We’ll continue to stress the fundamentals and keep trying to get better at what we do.”

Both teams were idle this past weekend – just the fourth time in series history that has happened, with Georgia holding a 2-1 edge in the previous meetings.

Georgia and Florida have met in Jacksonville 83 previous times, including annually from 1933-1993 and 1996-present. The 1994 and 1995 contests were played on the college campuses as the Gator Bowl was being renovated to prepare for the NFL’s Jacksonville Jaguars. Georgia leads the all-time series with Florida 50-41-2, including 43-39-1 in Jacksonville. The Gators won in 2014 following three straight Georgia wins from 2011-13.

On Monday, it was announced that the Saturday, Nov. 7, game between Georgia and Kentucky in Athens will kick off at noon. The game will be televised by the SEC Network, ESPN or ESPN2. The network will be determined after this weekend’s games.