Bulldogs 'getting closer and closer' as camp continues

Bulldogs ‘getting closer and closer’ as camp continues 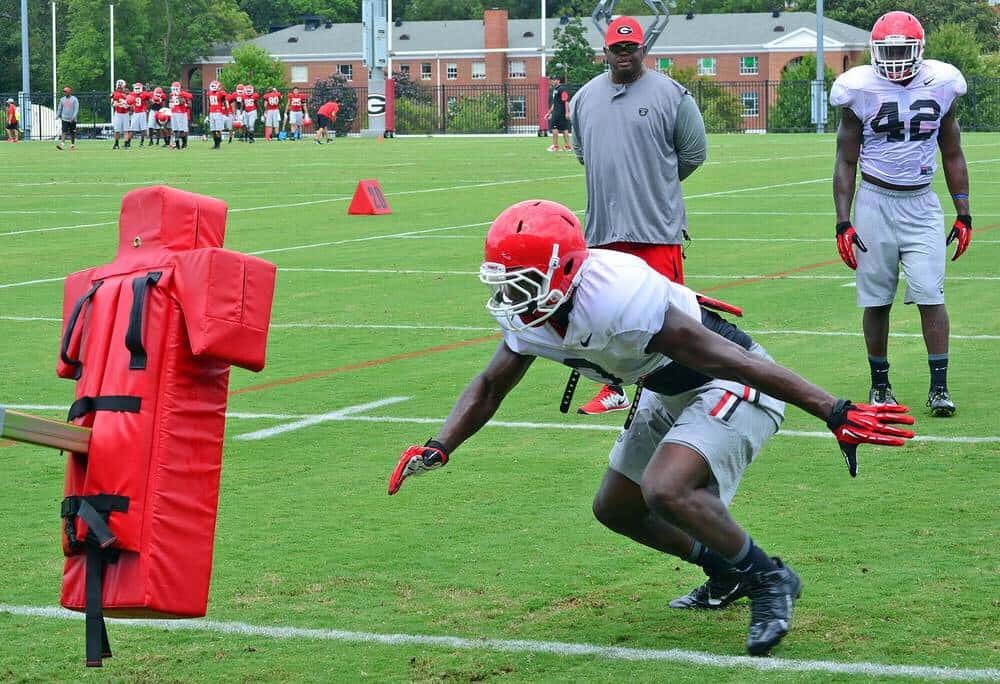 ATHENS, Ga. – The Georgia football team held its fourth session of preseason camp on the Woodruff Practice Fields on Friday, working out for 90 minutes in shorts, shoulder pads and helmets.

Friday marked the fourth of 11 consecutive days of practice for the Bulldogs. On Saturday they will put on full pads for the first time. Georgia will hold its lone two-a-day practice of the preseason on Monday.

“We’re getting closer and closer to where we are trying to go and where we want to be,” junior safety Quincy Mauger said Friday. “We’re excited about wearing the pads on Saturday.”

Sophomore cornerback Aaron Davis said he and his teammates are pleased with the progress they have made under defensive coordinator Jeremy Pruitt, who is entering his second year. Last season, the Bulldogs led the SEC and ranked fourth nationally with a plus-16 turnover ratio (up from minus-7 in 2013).

“We came into 2014 with a relentless mindset to not let teams bully us around or make big plays on us,” Davis said. “As a team, we weren’t satisfied with last year, so our goal is to raise our level even more so that we can reach our maximum potential.”

Running backs coach Thomas Brown visited with the media after practice on Friday and spoke on a variety of subjects. When asked about junior tailback Keith Marshall, Brown said he had used some of his own past experiences to connect even more with him. As a Bulldog running back in 2006, Brown tore his ACL, the same as Marshall in 2013.

“I’ve been there before and I understand it,” Brown said. “We talked about overcoming the mental aspect of that injury. Coming back as a running back, you think about what happened before, but you have to get over that and control what you can control. You can’t control what your body will do, but you can control your effort. We want to make sure he is his best physically and mentally, and he’s in a good place right now. … Keith looks good. He’s 100 percent, he’s running well, he’s got a great attitude, and he’s in better shape than in the spring in my opinion. He definitely can still go.”

Georgia, which came in at No. 9 in the Amway Coaches Poll released last week, begins the season against Louisiana Monroe on Saturday, Sept. 5, at noon. The SEC Network will televise the game.