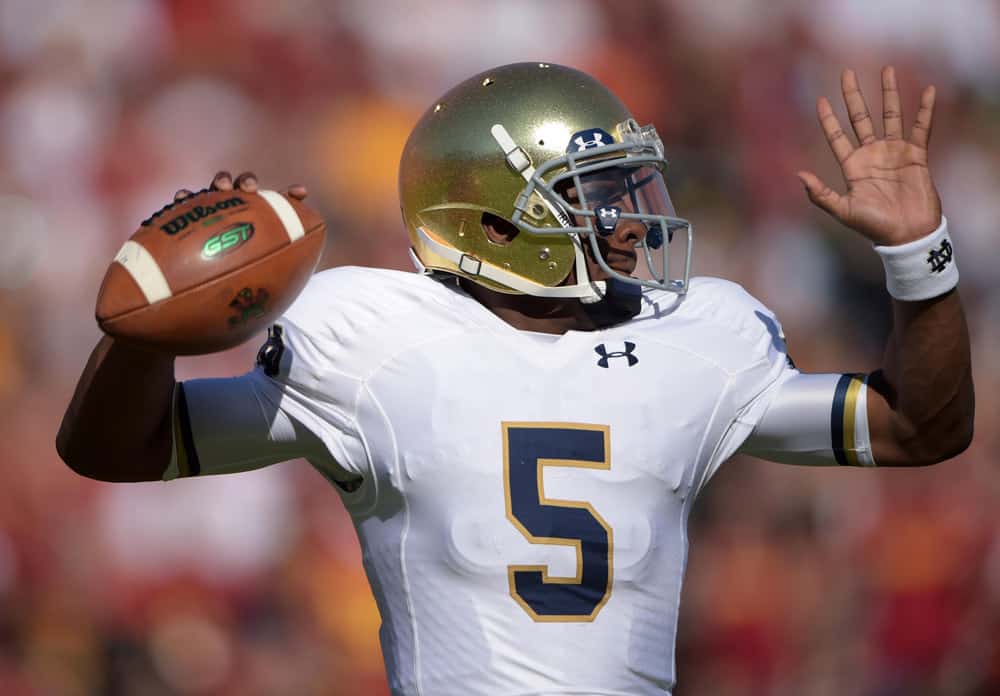 Earlier today, Notre Dame quarterback Everett Golson announced that he is transferring for his Senior season.

Golson, who graduated this semester, hails from Myrtle Beach, South Carolina and reportedly wants to play his final college season closer to home.

“I would like to thank everyone at Notre Dame for the opportunity to compete at the highest level of college football but most importantly to obtain my degree from one of the finest universities in the country,” Golson said in a written statement. “To all the Fighting Irish fans I want to thank you for the support over the past four years and let you know I truly love Notre Dame! To my former teammates, who I will miss tremendously, I wish much success in the future and will be your biggest fan from afar.”

Immediately after Golson’s announcement, fans and writers began to toss the names of possible schools around. Two SEC schools that are in the running are Georgia and South Carolina, according to a report by 247Sports.

But Golson may not be able to play for an SEC team due to his suspension in 2013 due to academics. Per SEC bylaw 14.1.14.1, part d, graduate student-athletes may receive financial aid if “the student-athlete has not been subject to official university or athletics department disciplinary action at any time during enrollment at any previous collegiate institution.”

Even if Golson can get a waiver to attend an SEC school, does Mark Richt and the Bulldogs even have interest in him? The Dawgs currently have four quarterbacks on the roster, and the starting job appears to be between redshirt sophomore Brice Ramsey and redshirt sophomore Faton Bauta.

Jacob Park and Sam Vaughn, both redshirt freshmen, are also on the roster.

In two seasons at Notre Dame, Everett Golson threw for 5,850 yards, 41 touchdowns and 20 interceptions. He was battling junior Malik Zaire for the starting job in 2015, and that battle was expected to last into Fall camp.