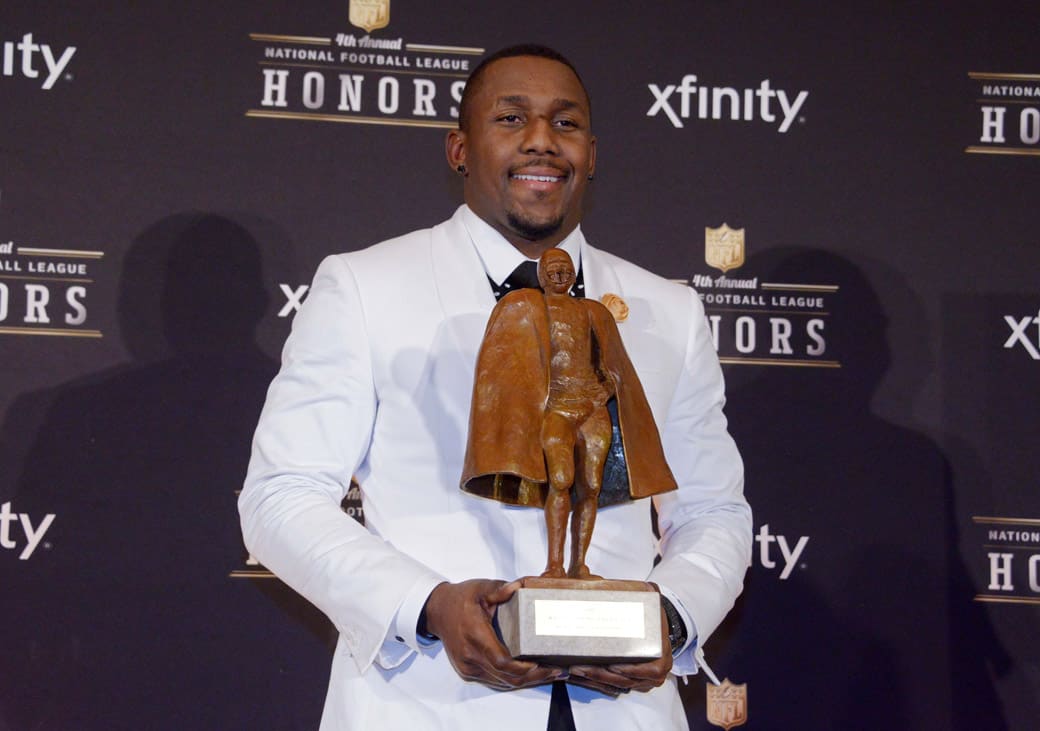 ATHENS, Ga. – Thomas Davis of the Carolina Panthers and former All-American at the University of Georgia, was named the 2014 Walter Payton Man of the Year, it was announced Sunday. The award, which is presented by Nationwide, recognizes a player’s off-the-field community service as well as his playing excellence.

The announcement was made during the fourth annual NFL Honors, a two-hour primetime awards special that aired Saturday night on NBC. Jarrett and Brittney Payton, the late Walter Payton’s children, honored Davis on-field before kickoff of Super Bowl XLIX.

“I am honored to be selected as the Walter Payton NFL Man of the Year,” said Davis. “This award means a great deal to me, as it symbolizes the valued work that the NFL, its players, and its 32 teams do in the community. I am blessed to have such a strong support system in my family, the Carolina Panthers and the NFL, which allows me to make an impact in the communities we serve.

I would like to recognize the outstanding efforts of each of this year’s Walter Payton NFL Man of the Year nominees. The collective compassion, commitment and service they provide to their respective teams and communities sets a standard for others to follow. I would like to thank the National Football League, the Payton family, and Nationwide for recognizing the efforts of NFL players who are following the inspirational leadership and legacy of Walter Payton.”

2014 was another strong season for linebacker Davis, who started in all 15 games he played and finished with his third consecutive 100-tackle season. Davis, a four-year team captain, totaled 129 tackles, 2.5 sacks, two forced fumbles, one fumble recovery and six passes defended. He was a key component of the Panthers 10th-ranked defense, helping the team become the first franchise to claim consecutive NFC South titles. Davis ranks second on the Panthers all-time tackles list with 831.

Off the field, Davis puts his shoulder in to as many charities as he does opposing team ball carriers. In 2007, he and his wife Kelly founded the Thomas Davis Defending Dreams Foundation (TDDDF), a non-profit dedicated to providing and promoting free programs that enhance the quality of life for more than 2,000 underprivileged children and their families annually. Since its inception, the foundation has distributed more than $500,000 in aid. The foundation’s cornerstone program, the Youth Leadership Academy, is a 14-week afterschool mentoring program for low-income middle school students.

Davis annually provides two college scholarships for graduating high school seniors who have completed the Youth Leadership Academy program. Through TDDDF, Davis also hosts annual programs including a back-to-school supply giveaway, a Thanksgiving meal for members of a local women’s shelter and a Christmas gift giveaway for underprivileged children, in Charlotte, N.C., parts of South Carolina and in Davis’ hometown in Georgia.

Davis is an avid proponent of keeping youth active and healthy. In June 2013, he led the construction of the first and only playground in his rural hometown of Shellman, Ga. In addition, his annual free football camp provides more than 350 children with instruction in football basics and life skills. Davis is active in the Panthers’ PLAY 60 efforts and is a frequent visitor at the local pediatric hospital.

In April 2014, Davis received the Call to Courage Award, given annually to a Christian athlete who displays exemplary character through both adversity and triumph. Davis is a four-time Walter Payton Man of the Year nominee, and was a finalist in 2013 – the team’s first.

Davis will receive a $50,000 donation in his name to a charity of his choice from the NFL Foundation and Nationwide. The two additional finalists for the award, Anquan Boldin of the San Francisco 49ers and Aaron Rodgers of the Green Bay Packers, will receive $10,000 donations in their names from the NFL Foundation and Nationwide. To learn more about the finalists and all 32 team nominees, visit www.nfl.com/manoftheyear.

Davis was chosen from among the 32 team nominees for the award, all of whom receive a $5,000 donation from the NFL Foundation and Nationwide to the charity of their choice. The selection panel is comprised of NFL Commissioner Roger Goodell, former NFL Commissioner Paul Tagliabue, Connie Payton, Pro Football Hall of Fame members Frank Gifford and Anthony Munoz, 2013 winner Charles Tillman, and Sports Illustrated football writer Peter King.

Davis joins an esteemed list of winners of the annual award. Recent winners of the Walter Payton NFL Man of the Year Award include Charles Tillman of the Chicago Bears, Jason Witten of the Dallas Cowboys and Matt Birk, then of the Baltimore Ravens (2011).

The winner of the Walter Payton NFL Man of the Year Award will receive the Gladiator statue, an original art creation by the noted sculptor, Daniel Schwartz.