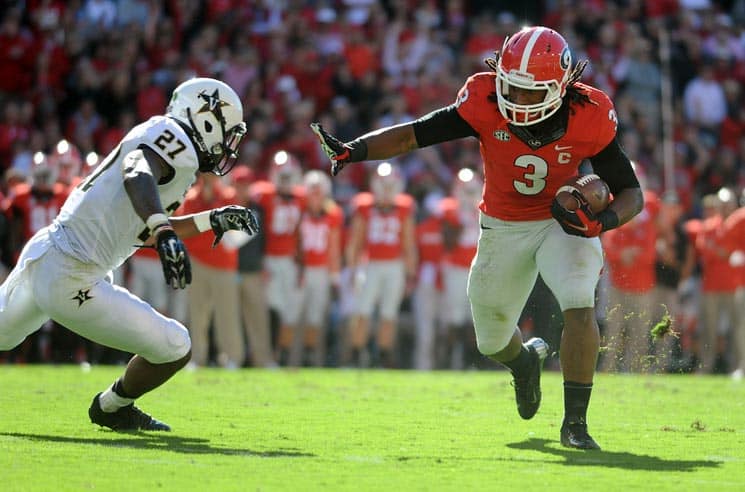 ATHENS, Ga. – Georgia junior tailback Todd Gurley has been named to the Paul Hornung Award Honor Roll for the third time this season after his performance versus Vanderbilt, according to an announcement on Monday.

The Hornung Award is given annually to the nation’s most versatile player in major college football. Former Bulldog and current Philadelphia Eagle Brandon Boykin was awarded the 2011 Hornung Award.

A native of Tarboro, N.C., Gurley accounted for 187 all-purpose yards (163 rushing, 24 receiving), 237 yards of total offense and two touchdowns against the Commodores. He also attempted his first career pass attempt and completed a 50 yarder to freshman tight end Jeb Blazevich. This marks the longest completion for the Bulldogs this year.

Gurley, who hurdled a defender for the second consecutive week, is ranked second nationally this season with an average of 194.6 all-purpose yards and is third in the country in rushing yards per game at 154.6. He is also the active career leader with 108.5 yards rushing per game.

For his career, Gurley is second in school history in most touchdowns scored (43) and most all-purpose yards (4,148) behind Bulldog legend Herschel Walker. Gurley is one of only four Georgia players in history to tally at least 3,000 yards rushing (3,147).