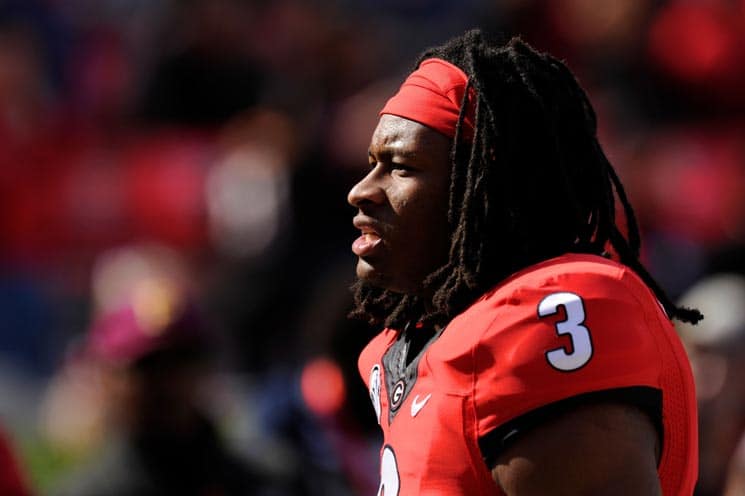 Yesterday evening, Dawg Nation received a collective punch to the gut when UGA announced that their star running back, Todd Gurley, was suspended indefinitely pending an investigation into NCAA rules violations.

The rules violations revolve around Gurley allegedly accepting extra benefits for his likeness (autograph) from sports memorabilia dealers. The amount he received was first reported last night by FOX Sports to be $400, but later TMZ said it was just short of $2,000.

Early this morning, Darren Rovell of ESPN reported that the authentication company JSA “authenticated at least 500 Gurley signatures (300+ jerseys, 70+ photos, 30+ mini helmets).” This came after he reported Gurley was looking for $8-25 a signature.

Todd Gurley did not make the trip with the team this morning to Missouri, so obviously he won’t play this weekend. He’s likely to miss one or two more games, according to a FOX Sports report this morning.

Could he miss more than that? Is his career at UGA over? That’s certainly a possibility, but it depends on what the investigation uncovers or if he admits to receiving thousands of dollars in compensation.

One thing is for sure, however. A memorabilia dealer who lives in Georgia wanted everyone to know that Todd Gurley was possibly breaking NCAA rules. He sent the below email to SBNation on Sept. 30:

I have video of Todd Gurley doing a private autograph signing ***. He has been paid thousands of dollars for his stuff over the last 18 months. I personally paid him for this signing on the video. I have bought and sold game used equipment from him.

I want no compensation. Just want someone to leak this story that’s deserving. If you have any interest, give me a call or email. I attached a photo of him in my car signing a mini helmet that I just sold last week on my eBay store.

All I ask is some privacy until we can touch base.

I live on Georgia and would crucified if my name was released.

The video is about 5 minutes long but doesn’t show the money exchange.

I believe this would be the lead story on sports center if ESPN got their hands on this. Hope to hear from you soon.

SBNation reported that the photo “shows an African-American man with dreadlocks signing a red item while sitting in a car. His face is not visible. There is no way of telling whether it is Gurley or not.”

The website verified the identity of the emailer, but didn’t run the story because they said their purpose is not to “enforce the NCAA’s insane bylaws.”

Georgia fans have reportedly identified the subject and have posted details on various UGA message boards, but we won’t get into that here.

Without Gurley, Nick Chubb and Brendan Douglas will have to fill the void. And hopefully Sony Michel and Keith Marshall can get back on the field soon.