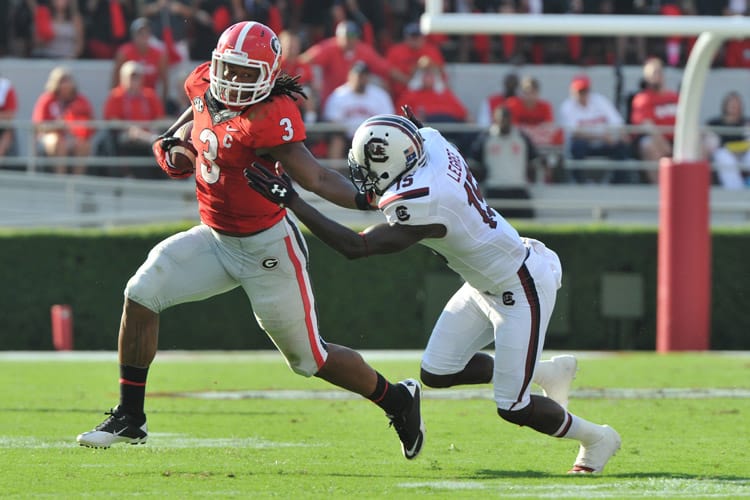 On Saturday, the 6th-ranked Georgia Bulldogs travel to Columbia to take on the 24th-ranked South Carolina Gamecocks in a huge SEC East showdown. The game will be televised by CBS at 3:30pm ET.

Georgia enters the game 1-0 after crushing then No. 16 Clemson 45-21. The Dawgs had been ranked 12th in both polls, but have since moved up to 6th in both the AP and Coaches polls.

South Carolina is 1-1 and ranked 24th in the AP Poll and 23rd in the Coaches Poll. The Gamecocks fell to Texas A&M 52-28 in their season-opener and then bounced back to defeat East Carolina 33-23 last weekend.

Last year in Athens, Georgia stopped the Gamecocks’ three-game winning streak in the series with a 41-30 victory. The Bulldogs have dominated the series against the Gamecocks, but the series is even over the last eight meetings.

Georgia will likely lean on Todd Gurley and the running game tomorrow, although South Carolina will surely stack the box and dare Hutson Mason to throw. Weather will also be a factor on offense, as the forecast calls for rain much of the day.

On defense, the Bulldogs hope to show continued improvement under defensive coordinator Jeremy Pruitt. The Bulldogs need to keep the Gamecocks from sustaining long drives and also need to get more turnovers.

The Dawgs will again be without wide receivers Malcolm Mitchell and Justin Scott-Wesley. Both are recovering from injuries and will not make the trip with the team. In addition, linebacker Davin Bellamy is serving the final game of his two-game suspension.