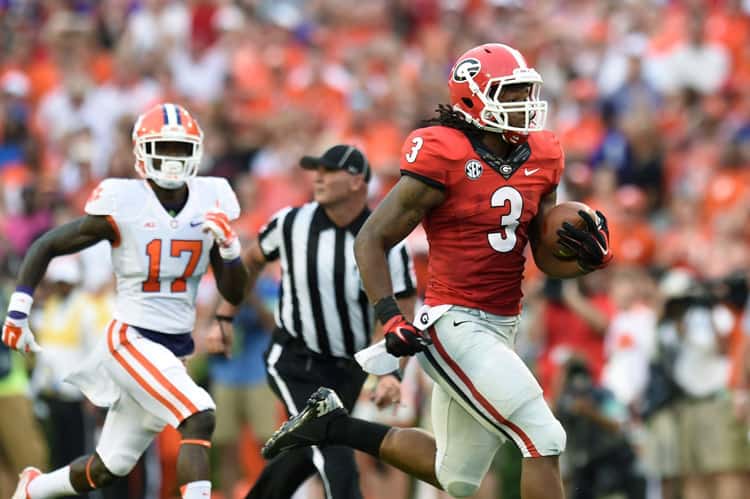 ATHENS, GA – The No. 12 Georgia Bulldogs handed the No. 16 Clemson Tigers a 45-21 loss in front of an electric Sanford Stadium crowd of 92,746 and a nationally televised ESPN audience on Saturday, Aug. 30 in Athens, Ga.

Georgia is now 1-0 on the season, while Clemson falls to 0-1. Georgia improves to 91-27-3 in season openers including 11-3 under Mark Richt. The Bulldogs now lead the series over Clemson 42-18-4. Georgia is 3-2 against the Tigers when both are ranked in the top 20. The Bulldogs are now 53-10 against non-conference teams including 37-1 at home under Richt.

Todd Gurley had a record-setting performance for the Bulldogs, totaling 293 all-purpose yard to lead the team offensively. Gurley rushed for 198 net yards, his 14th 100-yard rushing game. He also became the fifth Bulldog with a 100-yard kickoff return for a touchdown when he took one back midway through the second quarter that tied the score at 21-21. In addition to his all-purpose yard, Gurley accounted for four touchdowns.

Clemson took 7-0 lead on the first drive of the game, going 70 yards on 12 plays in 4:14. After going 69 yards, the Tigers converted on fourth down for the touchdown.

The Bulldogs answered on their second drive of the game. Mason got the drive started with an 11-yard pass to Sony Michel that put Georgia at the Clemson 46 yard line. After a nine-yard pickup by Isaiah McKenzie, Mason found Bennett down the sideline for 19 yards that set up a first down at the Clemson 23. Two plays layer, Gurley rushed 23 yards to the end zone for the touchdown. Marshall Morgan’s extra point kick was good, tying the game at 7-7.

Georgia took a 14-7 lead with less than a minute to play in the first quarter. After a smothering Georgia defensive stand that included a sack of quarterback Cole Stoudt, Gurley took the first handoff of the drive 14 yards to the Clemson 22. Another Gurley run set up a 12-yard pass to Bennett that set up a two-yard touchdown run by Mason.

Clemson responded with a pair of touchdowns that allowed it to take a 21-14 lead. The first touchdown came on a 30-yard pass from Deshaun Watson to Charone Peake with 13:52 left in the first half. The Tigers took the lead on a one-yard touchdown run by C.J. Davidson.

Clemson looked to take the lead with 48 seconds left in the second quarter, attempting a 34-yard field goal that sailed wide left.

Mason orchestrated a 10-play, 57-yard second half opening drive that was capped off by a 27-yard field goal by Morgan that put Georgia up 24-21. During the drive, Gurley picked up 22 yards on the ground.

The score remained 24-21 until the just over 10 minutes left in the game. In Georgia’s first drive of the fourth quarter, Gurley rushed for 58 of the 82 yards during the drive. Gurley capped off the drive with an 18-yard rush up the middle that gave Georgia a 10-point lead at 31-21.

The Georgia defense continued to stymie the Tiger offense, as the ensuing possession saw Clemson post negative yardage, forcing it to punt and giving Georgia the ball at the 47.

Riding the momentum, Chubb took the first play of the drive 47 yards into the end zone for his first career touchdown that put Georgia up 38-21.

After another three-and-out by the Tigers, Gurley took the handoff from Mason and rushed 51 yards for his fourth touchdown of the game.

The Bulldogs maintained possession for the final 5:24 of the game to seal the 45-21 win.

The Bulldogs will have next week off before traveling to Columbia, S.C., for their Southeastern Conference opener against the South Carolina Gamecocks. The game is scheduled to start at 3:30 p.m., and will be televised on CBS.

*Impressive Start: No. 12 Georgia enjoyed a successful season opener with a 45-21 win over #16 Clemson as the Bulldogs tallied 328 rushing yards including a record night from Todd Gurley, and the defense shut out the Tigers in the second half, limiting them to 15 yards on 22 plays and no points.

Georgia improves to 91-27-3 in season openers including 11-3 under Mark Richt. The Bulldogs now lead the series over Clemson 42-18-4. Georgia is 3-2 against the Tigers when both are ranked in the top 20. The Bulldogs are now 53-10 against non-conference teams including 37-1 at home under Richt.

Gurley also finished with his 14th 100-yard rushing game after going for a career-high 198 yards on 15 carries with three rushing scores. He scampered in for a 23-yard touchdown to tie the game at 7-7 at the 6:36 mark in the first period. Gurley then had an 18-yard touchdown run in the fourth quarter before taking his final carry 51 yards for his third score. Gurley’s 293 all-purpose yards (198 Rushing, 100 KO ret., Minus 5 Rec.) is a school record (the old mark was 290, Rodney Hampton, 1987).

True freshman running back Nick Chubb got his first opportunity and finished with 4 carries for 70 yards, including a 47-yard scoring run. Senior QB Hutson Mason finished 18-for-26 for 131 yards. Mason put the Bulldogs up 14-7 at the 0:35 mark in the opening period with a 2-yard touchdown run.

*Marshall Ties SEC Record: At the 11:27 mark in the third quarter, Junior PK Marshall Morgan drilled a 27-yard field goal to tie the SEC record with 18 consecutive field goals made in his career. He tied former Tennessee PK Fuad Reveiz for the league’s all-time mark.

*Barber Productive: Junior punter Collin Barber had five punts for 45.5 yards with three inside the 20 and a long of 60 yards. Sophomore Reggie Davis had seven punt returns for 37 yards.

*Points Off Turnovers: Each team forced a turnover but failed to convert the miscues into any points. Michael Bennett fumbled the ball in the first quarter on the Tiger 9-yard line and Clemson recovered. But the Tigers then went three-and-out after ending up in a 4th-and-11 situation. At the 5:46 mark in the second quarter, redshirt freshman CB Aaron Davis snagged his first career interception on the UGA 48-yard line. The Bulldogs then ran three plays and had to punt.

Seven true freshmen have played for the Bulldogs through two quarters. In addition to Sanders and McKenzie, Sony Michel, Nick Chubb, Jeb Blazevich, Rico Johnson and Lorenzo Carter all took the field.

Team Notes
*Clemson scored 21 points in the first half. Tied for the most Clemson has scored in a first half against Georgia. The Tigers also scored 21 in the first half in 1986 and in 2013. The halftime score last year was 21-21.
*Clemson gained 276 yards of total offense and scored 21 points in the first half. The Tigers averaged 253 yards of total offense and 20.5 points per half last year.
*Clemson ran 54 plays in the first half, the most plays Clemson has run in a half against Georgia since 1980 when the Tigers ran 56 in the first half in the game in Athens. The Tigers ran 56 plays to just 10 for Georgia in the first half of that game, yet Georgia led 14-10 at intermission.
*Average starting field position for this game was the key stat. Georgia’s average start was its own 43 and Clemson’s average start was its own 19. This was just the second time in the last 17 years that Clemson had an average starting field position inside its own 20. It was the 10th time in the last 17 years that the opposition started at its own 40 or better.
*The difference of 24 yards per possession was the second most in the last 17 years and the most since the 2006 Wake Forest game, a game Clemson won. Wake Forest’s average start was midfield and Clemson’s was its own 21 for a 29-yard margin per possession in that game eight years ago.
*This was the first season opening loss for Dabo Swinney as head coach. It was the program’s first season opening loss since 2008 when Alabama defeated the Tigers 34-10 in the Georgia Dome.
*This was Clemson’s fourth season opening loss since 2000. All four have been to top 25 SEC teams. The previous three teams to defeat Clemson in the opener have gone on to a combined record of 36-6 and all have finished in the top 10.

Individual Notes
*Clemson game captains today were Cole Stoudt, Adam Humphries, Grady Jarrett, Vic Beasley, and Sam Cooper
*McKensie Alexander started in the secondary for the Tigers today in his first game as a redshirt freshman.. He is the first freshman to start the first game of the season in the secondary since Alex Ardley in 1998. Ardley started all 11 games that season.
*Mike Williams had a career high 88 yards receiving in the first half. His previous best for a game was 70 yards receiving against The Citadel last year.
*Both quarterbacks directed touchdown drives for Clemson in the first half. Cole Stoudt took the Tigers on a pair of scoring drives (70 and 68) and freshman Deshaun Watson led the Tigers on a scoring drive (78) in the second period in his only appearance. Clemson actually had touchdown drives of at least 68 yards on consecutive drives that were led by two different quarterbacks.
*Charone Peake had a 30-yard touchdown reception from Deshaun Watson in the first half. It was Peake’s first catch and first touchdown since last year’s second game against South Carolina State. Peake played just two games last year due to a torn ACL.
*Vic Beasley record a sack in the first half and had two tackles for loss for the game. He now has 22 sacks for his career and moved into sixth place in Clemson history and is tied with Brentson Buckner and Bryant McNeal. He needs seven to become Clemson’s career leader.
*Clemson safety Robert Smith tied his career high in terms of tackles in tonight’s game with 10. In fact it is his second straight game with 10 tackles. He had 10 in Clemson’s win over Ohio State in the Orange Bowl to end last season. Smith also had a fumble recovery tonight.
*Adam Humphries had five catches tonight and went over the 100 mark for his career. He enters the home opener against South Carolina State with 102.
*Bradley Pinion had a career high 10 punts tonight and averaged 45.1 yards per boot. He had two punts inside the 20 and no touchbacks. He now has 26 punts inside the 20 without a touchback over his last 14 games.
*C.J. Davidson, who came to Clemson on a track scholarship, had 13-66 rushing tonight, his career high in total yardage, and had a touchdown. He averaged 5.1 yards per rush.
*When Deshaun Watson threw a touchdown pass in the second period he became the first Clemson freshman quarterback to throw a touchdown pass since Tajh Boyd threw two in the Belk Bowl against South Florida in 2010.